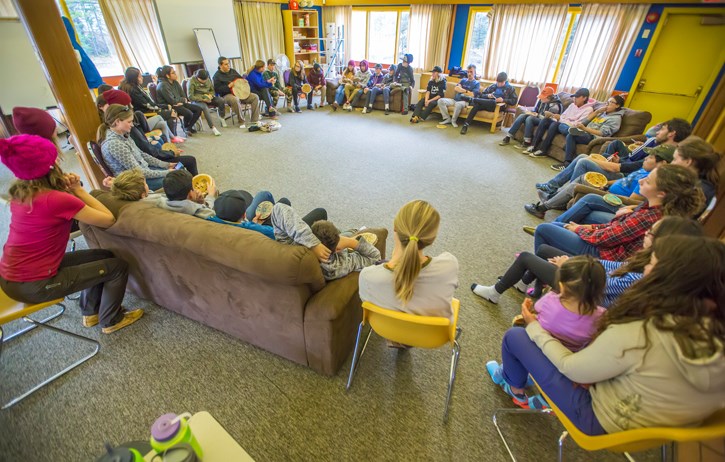 Grade 8 students from Lawrence Grassi Middle School and Exshaw School gather for a wrap-up circle concluding a three day stay at the Canadian Rockies Outdoor Learning Centre on Thursday (Oct. 18). Indigenous youth from Morley that attend Exshaw and LGMS were joined by students from Canmore as participants in the Sage Program for a three day stay of friendship-making and outdoor skill learning. The aim was to give the youth lasting peer connections throughout their Grade 8 year to help the students transition successfully into high school next year.

Most quietly say they miss sleeping in their own beds. Fewer still break the awkward teenage trepidation to say they would miss their new friends.

For the previous two nights and three days, ended on Friday (Oct. 19), a mix of Indigenous and non-Indigenous youth from Morley and Canmore, bunked together at the Canadian Rockies Outdoor Learning Centre, creating new friendships and potentially life-long connections.

Beyond campfires, hikes and late night cabin conversations about Fortnite, the CRPS school board, teachers, instructors, Outward Bound and the Calgary Foundation saw the immediate need to connect these young students – and time is on the line.

Next year, the Sage Program students will be entering high school, and for the Canmore youth this most likely means success and graduation. For the Morley youth the future is not so certain.According to the Assembly of First Nations, the high school graduation rate for Indigenous youth in Canada is approximately 36 per cent, which is half the graduation rate for non-Indigenous students.

“We saw the dire importance to create opportunities for Indigenous youth and non-Indigenous youth in the Bow Valley to come together, get to know each other, and create support networks for all of their transition into high school,” said Exshaw School success teacher Genevieve Soler.

In previous years, the Sage Program, also known as the Stoney Adventure Group Experience, focused on providing opportunities to enhance educational outcomes from high school-aged Indigenous youth.
Outward Bound partnered with CRPS to provide instructors for the program, which is a partnership that has continued to this day with the new focus on Grade 8 students.

Doug Saul, an instructor with Outward Bound, says that one of the main focus areas of his work has been to increase the sense of belonging among Stoney Nakoda students into the greater Bow Valley community, and to bring their perspectives in turn to others.

“There has been some traditional activities, like group games, we’ve done some art, we’ve had some campfires … in and around that we frame it in the Bow Valley’s context as well,” he says.

“Each night we’ve had some knowledge keepers from the Stoney Nakoda reserve come and involve the students in some activities: drumming, art and other activities that really share not just the projects they have, but an integrated point of view.”

Throughout the final day all of the students work on tree cookies – circular cuts of tree trunks that the students then decorate in any way they choose and then trade with their new friends – under the direction of their teachers and Outward Bound instructors.

It’s clear that the connectivity is working. Morley kids sit with Canmore kids; LGMS students with Exshaw and there’s lots of laughing as they create their personal artistic expressions.

But, as every middle school student transitioning to high school can relate, this is one of the hardest and most stressful periods in a young person’s life.

“We need all of our kids to be successful, and these opportunities of cross-cultural learning and getting kids out on the land and creating opportunities for kids to come together and problem solve and get to know one another is critical to the success of young people,” says Soler.

Connecting the students, building their critical thinking skills and increasing their appreciation and tolerance of different cultures and ways of thinking are key factors in providing long-term success.
Closing that gap between graduation rates has been a major priority for the CRPS school board.

“There’s an apprehension in Grade 8 when you’re going over to the high school and it exists regardless of what school you’re coming out of: you’re going to the big house,” says CRPS board chair Carol Picard.
CRPS has identified where students lose out along their educational path, and Grades 7 through 9 are critical to keeping on track to graduation.

“If it’s emotionally not a friendly place, they’re not going to stick around,” she says.

Back in the sharing circle, one of Stoney Nakoda’s most well-known and celebrated singers and drummers, Daryl Kootenay, begins a song of empowerment. Singing in Nakoda, he ends the camp hoping to inspire all of the students to succeed in the year to come.

For the non-Indigenous youth, although most don’t know more than a handful of Nakoda words, for the first time during the morning they sit in reverential silence. Kootenay has impressed upon all those in attendance that his song of power is more than just a song – it’s a prayer.

“These songs are a way of connecting and reminding,” he says.

For the Morley students, more than a few smiles flash as he weaves the words and beats together as a reminder of the Stoney Nakoda tradition as keepers of the song.

Kootenay wants to inspire the Stoney Nakoda students to succeed when they enter high school in Canmore, and helping the students to be flexible while still retaining their cultural heritage is key.

“With the history of Indigenous peoples in Canada – the Stoney Nakoda being right here – it’s like we’re leaving a different world to go into another and a lot of the times for our young people from the Stoney Nation that’s a big change,” he says.

“So by bringing them together before they transition it helps them prepare.”

As for the students themselves, over the next few months they will be meeting each other again at various shared events, culminating in another camp in the spring.

“It’s been pretty good and I’m getting along with most of the kids,” says Taya Labelle, a Morley student who attends LGMS.