CANMORE – They may still be in high school, but a group of students from Our Lady of the Snows Catholic Academy is making waves in the scientific world trying to tackle real-world problems using synthetic biology.
Nov 8, 2018 12:00 AM By: Paul Clarke 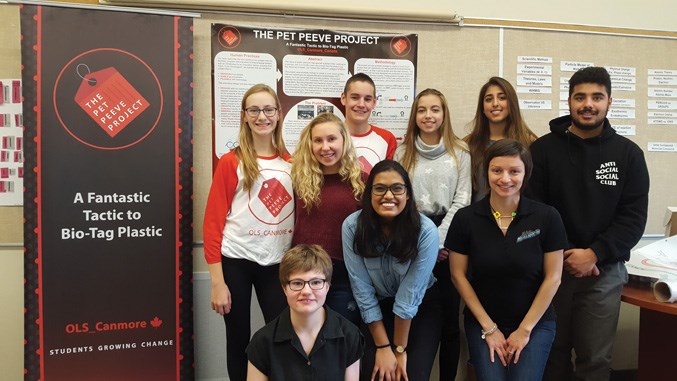 CANMORE – They may still be in high school, but a group of students from Our Lady of the Snows Catholic Academy is making waves in the scientific world trying to tackle real-world problems using synthetic biology.

Those efforts were recently recognized at the International Genetically Engineered Machine competition (iGEM) held at the Massachusetts Institute of Technology (MIT) in Boston last week, where the team won the Chairman’s Award for academic integrity and honesty.

“One of our projects this year was called accessible iGEM, so what we did was we identified accessibility issues that scientists with physical disabilities coming into synthetic biology face,” said Anya Morgan, a Grade 10 student with cerebral palsy.

One of those issues included improving how people use a pipette, a slender tube commonly used by scientists to transfer or measure small quantities of liquid, similar to an eyedropper.

“For a lot of people with physical disabilities, fluidity of movement is something that is quite difficult and having that movement when your pipetting is something that I’ve struggled with, so we’ve started to use technologies that we see in other places to start to protocol a pipette that makes that entire process easier.”

Jessica Puurunen, the teacher in charge of the club, said the prototype would be helpful for any new student regardless of their physical limitations.

“A lot of those microbiology lab techniques are difficult even if you don’t have a physical limitation, so as a teacher to instruct newbies it would be really helpful to have some adaptive equipment to make that easier,” said Puurunen.

While the team was recognized for its academic integrity and honesty, she said the award was also given to the students for starting a larger conversation about making all of microbiology more accessible.

To win the award they had to beat 358 teams from across North America, including teams from post-secondary institutions like Harvard and Yale University.

“We worked two years on the project and just to have that kind of recognition is really awesome, especially coming from a high school team.”

While the award was a welcome accolade, the students were also in Boston to showcase their main project, which involves manipulating bacteria to make it easier to sort and divert plastic waste before it ends up in the landfill.

For the past two years, the students have been trying to develop unicellular organisms that will create an enzyme they hope will be able to locate and colour code PET plastic, one of the most common types of plastics that end up in the landfill.

If it works, the aim of the project is to create an efficient, cost-effective way to colour code, or bio-tag, plastic for sorting.

“One of the aspects of the award is effort and working hard as a group and we worked extremely hard and we may not have gotten the result we wanted, we may not have been the top idea, but we managed to get recognized for how much effort we put into our project,” said Grade 11 student Adrianna Domingo.

The students will now take a few weeks to relish their accomplishment before deciding their next steps, which will likely include working closer with the school’s robotics club to help develop a robot that will be able to identify colour-coded plastic.