"From the initial stages of the investigation police believe that the victim got stuck in a tree during his descent and then fell some distance."
Jun 10, 2020 11:32 AM By: Jenna Dulewich 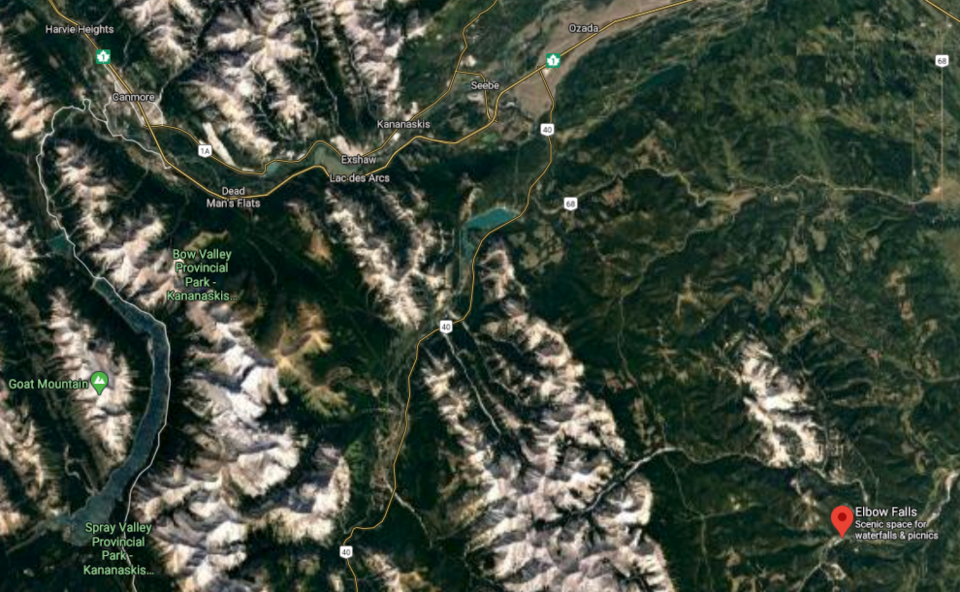 A missing paraglider was found in Kananaskis Country this Tuesday after being reported missing on June 9. GOOGLE MAPS PHOTO

KANANASKIS COUNTRY – A simple Monday outing had a tragic end for one Calgary man after Cochrane RCMP and Kananaskis Country Public Safety recovered the body of a paraglider the same day he was reported missing.

The 56-year-old from Calgary had gone to Kananaskis Country on June 8 to go paragliding, but after not returning home that night, Cochrane RCMP said they received a call the next day to conduct a search.

"We located [his] vehicle parked at Elbow Falls parking lot and utilizing the help from Kananaskis Country Public Safety resources we found the paragliding apparatus in a tree and after a quick ground search, we found him within a short time," Cpl. Troy Savinkoff with the Cochrane RCMP said.

The Calgary man was found deceased and has been taken to the medical examiner as the investigation remains open.

"From the initial stages of the investigation police believe that the victim got stuck in a tree during his descent and then fell some distance," Savinkoff said in a statement.

RCMP officers are also looking into the equipment used to determine if there were any faults.

The corporal encourages anyone recreating in the outdoors to "bring along a buddy."

"We do know he was by himself and we would encourage anyone in the public who engages in [outdoor] activities to have a friend nearby to have contact with so when things do happen they can call for help within short order," Savinkoff said.