“We’ve been kind of maxed for resources for a while now, and now we add this new level of visitation in, and we’re clearly not staffed to manage that in any sort of long-term way.”
Jul 16, 2020 6:00 AM By: Cathy Ellis 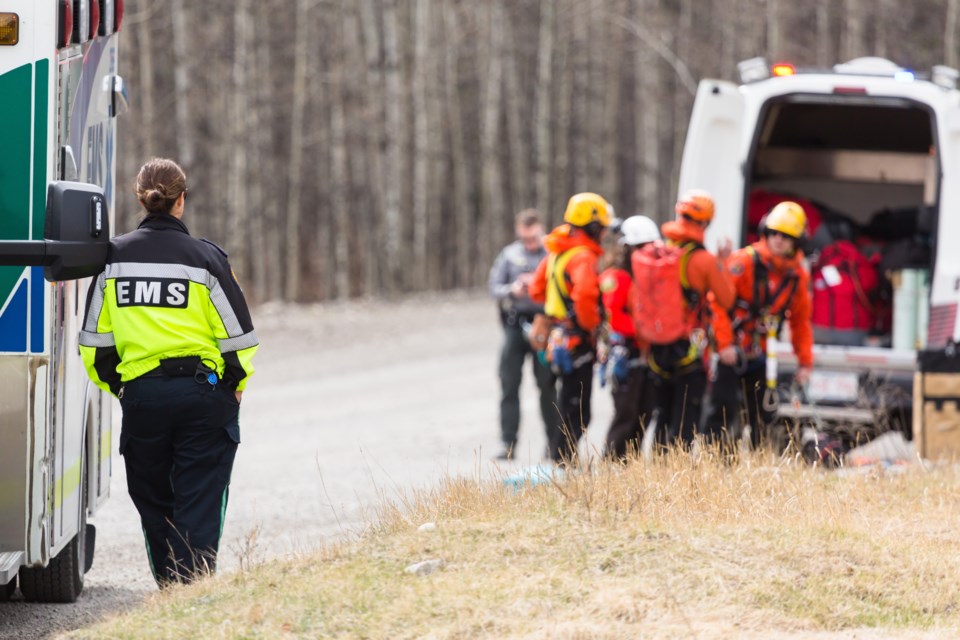 A member of EMS watches rescuers suit up to rescue a male mountain climber off the side of Mount Yamnuska near Exshaw in 2016. RMO FILE PHOTO

KANANASKIS – Rescuers responded to a record number of incidents in the mountains on the weekend due to a dramatic increase in visitation, including a scrambling fatality on Mount Yamnuska.

Kananaskis Public Safety were called out to more than 20 rescues Friday through Sunday (July 9-11), including several back-to-back calls on Saturday, three of which were on Mount Yamnuska.

It prompted the unprecedented 24-hour closure by Alberta Parks of the local mountain, including the day use area, trails and climbing routes, to give the overwhelmed rescue services in K-Country a break. The mountain reopened Sunday evening.

Officials say the high visitation and dramatic spike in calls stretched the rescue team to its limits, forcing them to bring on an additional Alpine helicopter and pilot, as well as a public safety specialist from Banff National Park.

“It was pretty crazy for us … the weekend before was actually record setting, it was just that we broke another record this weekend,” said Jeremy Mackenzie, a public safety specialist and team leader for the Kananaskis region.

“We had multiple overlapping urgent calls in multiple locations across the region, and so essentially every single staff member that was on shift was fully engaged in rescue work for a fairly significant period of time.”

On shift on the weekend were four public safety specialists, 10 conservation officers and three dispatchers. On Saturday, a rescuer from Banff National Park helped the team out.

“We’ve been kind of maxed for resources for a while now, and now we add this new level of visitation in, and we’re clearly not staffed to manage that in any sort of long-term way,” Mackenzie said.

“If this is a new normal in terms of visitation and rescue volume, then we almost certainly are going to have some challenges with staffing going forward.”

The calls ran the full gamut from mountain bikers, paddlers, scramblers, hikers, lost people and everything from traumatic injuries to medical events – and one fatality on Mount Yamnuska.

An 30-year-old Calgary man died from injuries while scrambling on the scree slope on the front side of the popular mountain east of Canmore on Saturday.

Police say he fell approximately 20 feet on the scree slope, and there were a number of bystanders in the area who immediately helped the man.

“Within minutes of the initial fall, several boulders dislodged from the scree slope above, striking the injured male and the bystanders,” said Canmore RCMP Cpl. Sabrina Clayton in a news release.

First aid was initiated while RCMP, Kananaskis Public Safety, EMS, Alpine Helicopters Inc. and STARS air ambulance responded, however the man died as from his traumatic head injuries as a result of the rockfall.

About two hours after the fatality,  RCMP, K-Country Public Safety, EMS and Alpine Helicopters responded for a 24-year-old male who fell on a scree slope on the back side of the mountain about 4:10 p.m., resulting in a head injury.

“He suffered multiple traumatic injuries and was in very serious condition,” said Mackenzie, adding the man was taken by ground ambulance to a hospital in Calgary.

Mackenzie said in general Yamnuska is one of the busiest mountains in the region.

“It normally gets about 40 calls a year, which is in excess of 10 per cent of our entire region’s calls,” he said, noting it is a more difficult scramble than many believe.

Rescuers say they have never seen the Bow Valley and Kananaskis this busy, including popular areas near Canmore like Grassi Lakes and Ha Ling Peak, as well as along the Smith-Dorrien Highway in the Spray.

Mackenzie said emergency services couldn’t initially get ambulances through to staging areas at numerous trailheads because vehicles were so backed up on access roads, including at Yamnuska.

“Anecdotally, everyone – locals and our staff – just keep reporting it’s beyond what any of us have ever seen … it’s beyond anything that anybody’s ever experienced,” Mackenzie said.

“The volume is so high that there’s certainly no physical distancing happening at any of these places … there’s no room for people to spread out in a lot of the areas that are being so heavily used.”

With increasing visitation and call-volume, Mackenzie said it is very lucky that none of the rescue specialists, dispatchers or conservation officers have come down with COVID-19 yet.

“If and when that happens – and it’s probably a fairly high probability it will happen at some point – we’re going to have some big issues that way,” he said.

“We’re dealing with so many people now … our relative level of exposure is way up. You can only be as careful as you can be.”

After reading pushback from people about the temporary Yamnuska closure, top Canmore climber and adventurer Will Gadd went on social media to voice his support, saying the decision seemed totally reasonable given what happened there on Saturday.

“It's not about the nanny state or deciding what’s safe, it’s about EMS resources and people getting injured or killed at very high rates in one spot. That level of call-out is just unsustainable,” he posted on Facebook.

“Maybe we can have a little understanding and empathy for the workload of our public safety/SAR/STARS teams, the victim's family, etc. Put another way, we accept bear closures all the time.”

Kananaksis Public Safety reminds people heading out into the mountains to be prepared.

Mackenzie encouraged people not to bite off more than they can chew.

“Wear proper footwear, have a plan, do your research, carry a map, carry an emergency communication device because cellphones don’t work everywhere, be prepared for the weather,” he said, noting people could also consider wearing a helmet on scree slopes.

“The other thing we’ve mentioned is that if you’re going to one of the popular trailheads, you might want to consider going somewhere else.”