“I think the big thing is to do your research before you go, and you know what type of trail you’re venturing on to, and know the activity,” Kananaskis Public Safety Sector specialist, Jeff MacPherson, on staying safe in the backcountry. “We’ve seen a few instances of solo people who go by themselves. Go with a partner, stay with your group, and have a plan."
Jul 22, 2020 1:19 PM By: Tyler Klinkhammer 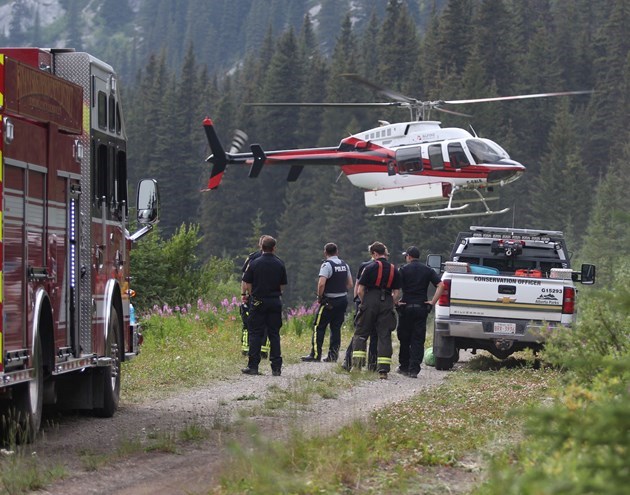 A busy weekend in Kananaskis for emergency first responders often sees multiple agencies working together to help out when the public needs assistance. RMO FILE PHOTO

KANANASKIS – Friday (July 17), the Kananaskis Public Safety Section, alongside local EMS and Alpine Helicopters, responded to reports of an injured mountain biker, who went over the handlebars of his bike, which resulted in a broken collarbone.

It was a standard call, and a pretty typical mountain biking injury, in a year that has been anything but typical, said Kananaskis Public Safety Sector specialist Jeff MacPherson.

The increased volume of calls has put some strain on emergency services.

“Last Saturday we had four rescue specialists on duty, we were all working and we actually had to use one resource from Banff, a visitor safety specialist,” he said.

MacPherson said that interagency coordination does happen from time-to-time when call volume is up, or there is a technical need, but it is not typical.

On the weekend of July 11 and 12, the Kananaskis Public Safety Sector had a record number of rescues.

Kananaskis only has access to one helicopter outfitted with the sling gear used to fly rescuers and patients in and out of remote, narrow trails or rough terrain where landing is impossible.

Despite the high volume of calls and added stress, MacPherson said his rescue team remains in high spirits.

“I’d say we’re all doing pretty good. COVID definitely adds another stress to the whole thing. It’s another dimension that we’re not used to dealing with on every rescue. I’d say, yes, stress is definitely high between all of us, but I think the big thing is that we just couldn’t maintain that pace through the whole summer,” MacPherson said.

He added that it is impossible to predict if the call volume will remain the same for the rest of the summer. Many people might start taking vacations elsewhere, businesses and services are starting to reopen, and people might disperse to other areas in the province, MacPherson said. He noted that this might result in fewer people visiting Kananaskis.

“We don’t know what to expect,” he said. “The user volume in Kananaskis has never been seen like this. Earlier in the spring, we were comparing it to August long weekend every weekend here, but now it’s well above long weekend visitation almost every weekend.”

He noted that there were a lot of new users heading out to the parks, but didn’t think that the new users were to blame for the high number of calls. Rather, MacPherson said that he thinks it’s simply the high numbers resulting in more accidents.

For new, or experienced users, heading out into K-Country, MacPherson had a few words of advice.

“I think the big thing is to do your research before you go, and you know what type of trail you’re venturing on to, and know the activity,” he said. “We’ve seen a few instances of solo people who go by themselves. Go with a partner, stay with your group, and have a plan."