“People are disappointed. I know residents … Have not supported this project since day one. They’ve always thought there are better alternatives that prioritize the needs of Calgary, as well as the needs of the surrounding communities,” Banff-Kananaskis MLA Miranda Rosin said.
Jul 12, 2021 5:15 PM By: Chelsea Kemp 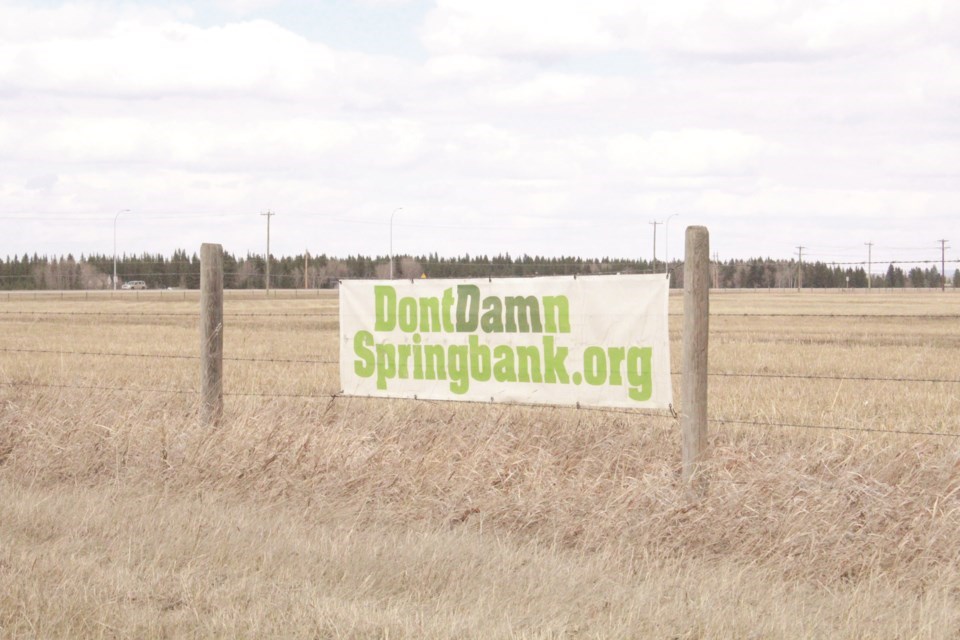 ROCKY VIEW— The controversial Springbank Off-Stream Reservoir has overcome another hurdle after receiving the seal of approval to move forward from the National Resources Conservation Board.

The National Resources Conservation Board (NRCB), an arms-length regulator of the Alberta government, announced its approval of the $430-million project in a press release June 22. The regulator cited the dry reservoir, commonly referred to as SR1, as being in the public interest.

“The board concluded that the project will provide much-needed flood protection to the city of Calgary,” the release stated.

First announced in 2014, SR1 is a flood mitigation project proposed in response to the 2013 flood in southern Alberta. The natural disaster resulted in five deaths and about $5 billion in financial losses and property damage.

SR1 is planned to span 1530 hectares (3,780 acres) in Springbank and include a diversion channel to help control Elbow River flow rates in the event of a flood. During flood events, water would be diverted from the Elbow River into an off-stream reservoir, constructed near Springbank Road and Highway 22, approximately 15 kilometres west of Calgary.

Once the risk of flooding subsides, the water in the reservoir would be returned to the Elbow River in a controlled manner. The reservoir, which would activate when water reaches 160 cubic metres per second, is designed to store up to 77.2 million cubic metres of water.

In January, the Impact Assessment Agency of Canada released a draft environmental assessment report that concluded the project would not likely cause “significant adverse environmental impacts.”

The NRCB's approval came after an 11-day virtual public hearing in March and April that included presentations from numerous stakeholders, including Alberta Transportation members, area residents, Stoney Nakoda First Nations members and others.

According to the NRCB press release, the project’s approval was based on its social, economic and environmental impacts.

“The board found that the project’s considerable positive social and economic effects outweigh any adverse economic, social, and environmental effects,” it stated.

Before coming into effect, the NRCB for SR1 requires authorization by an Order in Council by the Lieutenant Governor of Alberta, according to the press release.

While the Alberta government is in favour of SR1, the project has garnered plenty of criticism over the years from residents of west Rocky View County, including Springbank, Bragg Creek and Redwood Meadows.

Banff-Kananaskis MLA Miranda Rosin said the approval from the NRCB was an inevitability.

“I’m not surprised,” Rosin said. "At least after seven or eight years of fighting and trying to come to answer at least, we have answers now. The fight has unfortunately come to an end.”

All that remains now is a final go-ahead from the federal government.

“There’s a lot of work that has gone underway from a departmental view, at a provincial level, at a federal level. Once it got to that final regulatory stage, I think a lot of us foresaw that the regulator would inevitably at some point come to a conclusion that the project would proceed,” Rosin said.

Springbank and Bragg Creek community members lobbied hard against the project since its inception, Rosin said.

Many of these concerns were brought up during the NRCB hearing, including concerns about air and water quality, silt and debris from the dry dam, effects on the community and the effects on generational landowners.

“People are disappointed. I know residents … Have not supported this project since day one. They’ve always thought there are better alternatives that prioritize the needs of Calgary, as well as the needs of the surrounding communities,” Rosin said.

While the project will directly benefit Calgary, steps have been taken to protect communities up the river. Rosin cited the berms currently being constructed in Bragg Creek as an example.

“As much as many of us may not be happy with the decision I think that we have to accept it at this point,” Rosin said. “While they may have preferred a different final project for the Springbank Dam I think a lot of people are feeling optimistic and grateful that the berms are underway.”

“In late May of last year, Rocky View County Council made the decision to trust the provincial and federal review processes. The province had to meet very high standards to pass the National Resources Conservation Board review, which they have now done," Henn said. "If they can meet the similarly high standards for the federal review, the SR1 project can move forward.”

Springbank Community Association president Karin Hunter said residents were “disappointed” when they received news the project would be moving forward.

“We think the decision shows an utter lack of vision,” she said. “Ultimately, it’s a lost opportunity for Albertans to get something that could have been a positive legacy. We could have had a lake, a provincial park to create jobs and tourism to help diversify our economy [or] an asset that managed our water resources and protected and preserved our water supply in times of flood or drought.

“Instead, we get SR1, which destroys and sterilizes 4,000 acres of wetlands, native grasslands and other sensitive ecosystems.”

Opposition to SR1 has largely stemmed from the project’s potential environmental impacts, a lack of transparency and consultation and ballooning costs.

Hunter has previously said the government ignored alternative flood mitigation solutions that have been proposed over the years, including an option at MacLean Creek.

“This project ultimately, in our view, destroys and doesn’t create,” Hunter said. “It will be an ongoing economic, social and ecological liability.

“Was [The National Resources Conservation Board's approval] a rubber stamp? I don’t know, but we don’t think the evidence was considered with the seriousness it deserved.”