Teen in critical condition after glissading accident in K-Country 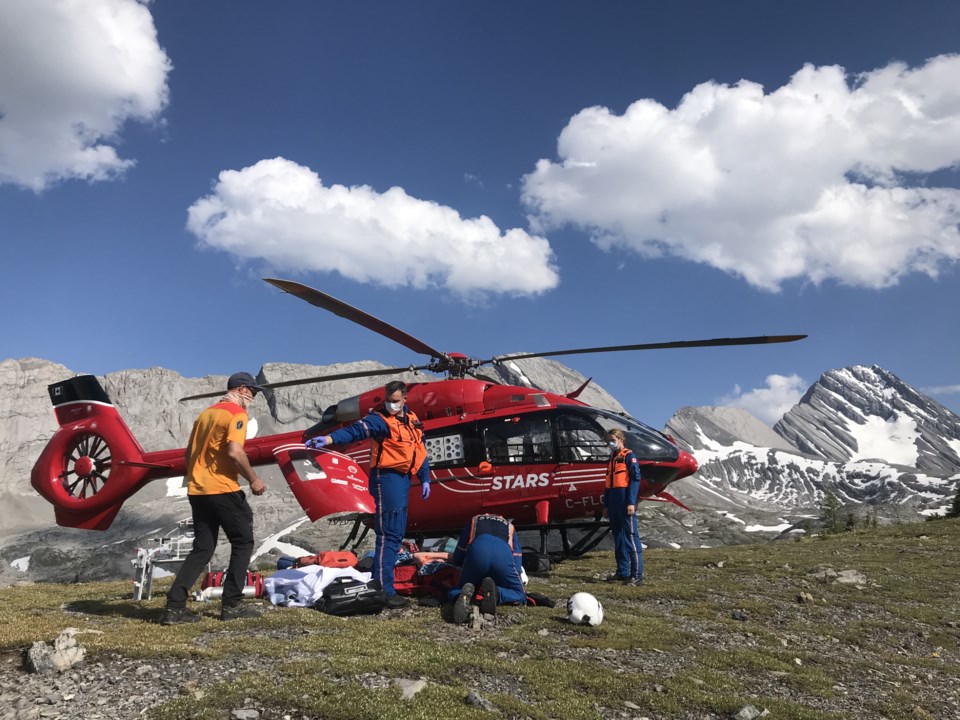 KANANASKIS – A boy in his late teens is critical condition in a Calgary hospital after suffering a significant tumble on a snow slope near Burstall Pass late Wednesday afternoon (July 29).

According to Kananaskis Public Safety, the teen was glissading – the act of descending a steep snow or scree-covered slope via a controlled slide on one’s feet or butt – on a snow slope near Burstall Pass when the accident happened.

“The individual was part of a group glissading down the snow slope,” said Mike Koppang, a Kananaskis public safety specialist.

“He lost control is what we believe happened, and came off the slope and tumbled though rocks at the bottom.”

STARS was dispatched to Burstall Pass at 4:15 p.m. after an Alpine Helicopters Inc. pilot, with two public safety specialists, slung the critically injured patient out on a long line.

“We rendezvoused with them to transport a male patient in his late teens to the Foothills Medical Centre,” said STARS’ Fatima Khawaja in an email.

This was Kananaskis Public Safety’s second call within as many days for STARS air ambulance.

The day before, a woman scrambling on Mount Lawrence Grassi was in critical condition after falling approximately 30 metres down a gully, landing in sharp scree below.

The woman was then transported by Alpine Helicopters to waiting EMS crews and STARS, who were set up at the Ha Ling trailhead.

Koppang said Kananaskis Public Safety is expecting a busy few days ahead given it’s the August long weekend – typically the busiest weekend of the year in the mountains.

He said people are encouraged to heed all safety warnings before heading out on mountain adventures – whether it’s climbing, hiking, scrambling or paddling on lakes and rivers.

“Make sure you choose objectives that are reasonable for you and research your trip,” Koppang said. “Make sure you have the appropriate skill level and equipment.”

For example, Koppang said a multi-pitch route on Mount Yamnuska is not a good idea for beginners.

The same goes for hiking, he said, recommending against anyone less than experienced attempting a hike such as Northover Ridge for instance.

“Start small and gain experience throughout your life,” he said.

“There’s no reason to go out and pick off the biggest objective right of the bat.”

With temperatures predicted to hit the high 20s C or low 30s C over the coming days, heat stroke is another concern as people hike and climb in the mountains.

“Make sure you have lots of water,” Koppang said.

Rescuers advise outdoor enthusiasts to wear appropriate clothing, to have proper equipment including maps, to wear solid, study footwear and to have enough calorie-rich food.

“A lot of people are just flat-out unprepared,” Koppang said.

Mount Yamnuska, which typically get about 40 calls a year, has kept rescue teams extremely busy this summer already.

A 30-year-old Calgary man died from injuries while scrambling on the scree slope on the front side of the mountain on July 11.

He fell several metres down the the scree slope, and there were a number of bystanders in the area who immediately helped. Within minutes, several boulders dislodged from the scree slope above and struck him.

About two hours after the fatal accident, rescue crews responded for a 24-year-old man who fell on a scree slope on the back side of the mountain, resulting in a head injury.

“A lot of people think Yamnuska is a simple, easy hike,” Koppang said. “We really encourage people not to start there if they are relatively new to hiking.”

In an unprecedented move, Yamnuska was temporarily shut down for a 24-hour period on July 12 to give rescuers a reprieve after responding to a record number of calls over a two-day period throughout K-Country.

Starting this weekend, for most weekends until Sept. 8 as needed, capacity limits will be enforced at Yamnuska day-use area and other areas in K-Country.

The move aims to deal with record-breaking visitation in the mountains and to make sure emergency vehicles have access to these busy places.