New study by Nikki Heim suggests some wildlife species are 'winning' and others are 'losing' under development and human use pressure
Nov 8, 2019 11:00 AM By: Cathy Ellis 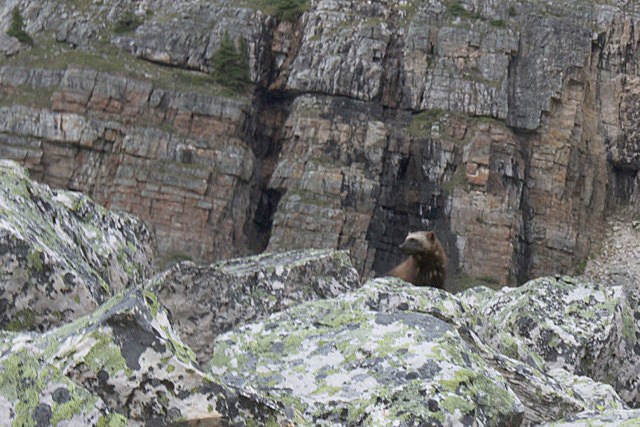 Some species are "winners" on the landscape and others are "losers" as a result of human use. Wolverines, for example, are struggling with habitat fragmentation, while coyotes seem to be thriving as development footprints in environmentally sensitive areas increase. RMO FILE PHOTO

KANANASKIS – A new study shows some wildlife species are "winners" and others are "losers" as humans continue to dominate the landscape with development and recreation.

The study, recently published in the science journal Landscape Ecology, shows heavy recreation, development, oil and gas and logging are dramatically affecting sensitive specialist species likes wolverines over species like coyotes that are more adaptable to the human footprint.

While the full impacts on the carnivore community in the northern Canadian Rockies are not yet fully known, researcher Nikki Heim said there is evidence that “some species are winning and some species are losing.”

She said this ongoing pressure on wildlife poses threats to biodiversity and ecological stability.

“That should be a red flag because our impacts on the landscapes are strong enough that it’s shifting the composition of species and over time that could mean we may lose some of those sensitive species,” said Heim, a local ecologist who led the study.

“We may have all of the native species here in our protected areas and landscape, but if we dig a little bit closer and look at abundance and distribution of different species, we’re starting to see more human adaptive species dominate the landscape.”

The initial part of the study centred on wolverines in Banff, Yoho and Kootenay national parks, but was later extended to include several other wildlife species in neighbouring Kananaskis Country.

A non-invasive technique was used to collect wolverine hair for DNA analysis. Beaver carcasses were tacked to trees at several locations. When wolverines climbed the tree, they snagged their hair on the attached barbed wire. Motion triggered remote cameras were also set up.

The study area is home to medium- to large-sized carnivores that include grizzly and black bears, cougars, lynx, bobcats, wolves, coyotes, foxes and wolverines.

By incorporating data between Banff and Kananaskis, researchers looked at how wolverines and other wildlife were doing as they moved outside the national parks into different provincial protected areas where there are different land designations.

One of the key findings was discovering a dramatic drop in wolverines moving from west to east.

“It was a little surprising because we still have a rugged mountain area, and with the things that we know about wolverines, that was a surprise to see them drop off so quickly.”

Outside of the mountain national parks, forest loss within the eastern ranges of the study area has been extremely rapid and expanding due to industrial development.

Logging is a long-standing dominant development pressure within and east of the Kananaskis Country region, with increases in oil and gas exploration continuing over time.

On provincial lands there’s also a myriad of recreational activities, including motorized use, unlike in the national parks where that’s banned.

“The increase in not only the frequency, but the type and distribution of human use,” Heim said.

“Wolverines are very sensitive to human disturbance; we’ve known that for a long time.”

The study concluded that generalist species, such as coyotes, are better adapted to habitat change and can expand their distribution patterns and increase in density.

In contrast, specialist species, such as wolverines, are less likely to adapt and, in turn, lose range and population size, relegated to the more undisturbed areas.

Specifically, the research indicated wolverine numbers started to drop, as the distribution and abundance of coyotes began to increase.

In fact, a significant increase of coyote occupancy along the eastern slopes of the Rockies suggests this region is on the edge of a continental range shift at the community level.

“When you think about the behaviour of coyotes, what we’re seeing across the country is they are doing fairly well in human-dominated landscapes – they adapt really well,” said Heim.

When the composition of different species starts to shift, Heim said there are also different interactions between those carnivores.

“As a landscape changes and supports some species over others, that may increase competition between those species,” she said.

“While we want our landscape diversity as well as a full carnivore community, the implication of diversity is decreasing even though we have all the species.”

The research points to the importance of long-term monitoring of the composition of carnivores.

Heim said human use should be carefully managed.

“We should be looking at early warning signs that maybe we’re doing too much in these areas,” she said.

“We have so many different uses on this landscape that are starting to cause cumulative effects for sensitive species, and if we want to support diversity on the land base, then we need to make sure the sensitive species survive.”