YOHO & KOOTENAY – Kayaks, canoes and stand-up paddleboards must be cleaned, drained and dried before use in Yoho and Kootenay national parks under a new rule to prevent the spread of invasive mussels and whirling disease.
Jun 20, 2019 12:00 AM By: Cathy Ellis 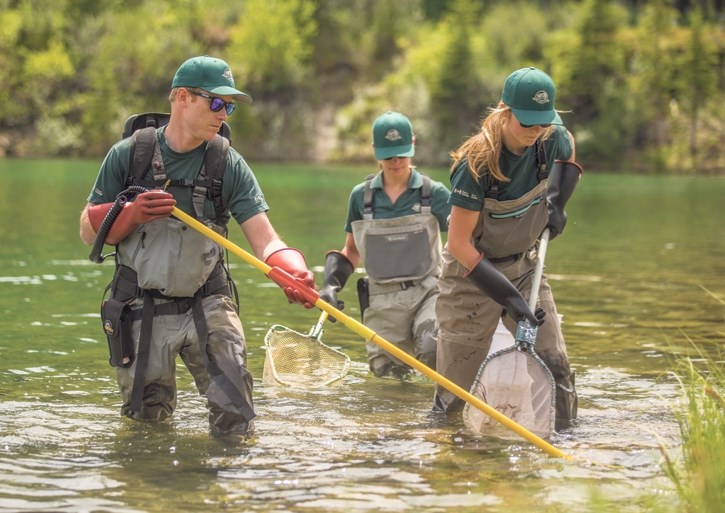 Parks Canada aquatics specialists remove fish from Johnson Lake in Banff National Park as part of its plan to eradicate whirling disease in the lake.

YOHO & KOOTENAY – Kayaks, canoes and stand-up paddleboards must be cleaned, drained and dried before use in Yoho and Kootenay national parks under a new rule to prevent the spread of invasive mussels and whirling disease.

Parks Canada has implemented a mandatory self-certification permit program, which requires watercraft be cleaned and drained of water, mud and debris and dried for a minimum of 48 hours before use in any lake or river in the two mountain parks.

“Invasive species alter aquatic ecosystems, cause irreversible damage and impact already vulnerable species at risk, such as the westslope cutthroat trout,” she said.

“They’re incredibly devastating and we really need people to get all the water and mud and debris out so there’s no possibility of transmission.”

Self-registration permits and questionnaires will be available at visitor centres, campgrounds and popular boat launching spots throughout Yoho and Kootenay national parks.

Anyone caught without the mandatory permit may be charged and face a maximum penalty of $25,000 in court.

“When people fill out their permit, they keep part of it and put the rest in the information box,” Humphries said.

Quagga and zebra mussels were introduced by trans-continental shipping from the Baltic Sea to the Great Lakes region of Canada and the United States in the 1980s.

These mussels have spread in Ontario and Quebec and have been discovered in Lake Winnipeg, Manitoba. They are also found in many American states as far west as California.

Humphries said they have not yet spread to B.C. or Alberta.

“We do know provincial inspection stations are intercepting boats that are contaminated with them,” she said.

According to experts, zebra and quagga mussels filter water to the point where food sources such as plankton are removed, altering food webs.

“It has the ability to really restructure the food web in a way that won’t be good for our native fish,” Humphries said.

“We do have native fish that are in trouble and need extra protection, so we’re worried about this impacting our westslope cutthroat trout and bull trout in particular.”

The spread of whirling disease is also a big concern.

In 2016, whirling disease was detected in Johnson Lake in Banff National Park and has since been confirmed in many creeks and rivers throughout Alberta, including the Bow, Oldman, North Saskatchewan and Red Deer watersheds.

“We are, of course, worried about whirling disease and it’s in some locations in Banff,” Humphries said.

“So far, we don’t have it anywhere in Yoho or Kootenay, or British Columbia for that matter, so we’re worried it could potentially get transferred across the Divide.”

“They’re the base of the food chain. A lot of the other fish eat them so we really want to keep our whole food web as intact as possible,” Humphries said.