"The RCMP are actively reaching out to friends and family of those impacted and we are on standby to help support those families in the days and weeks to come," said Pursuit Banff Jasper Collection president David McKenna.
Jul 19, 2020 7:21 PM By: Tanya Foubert 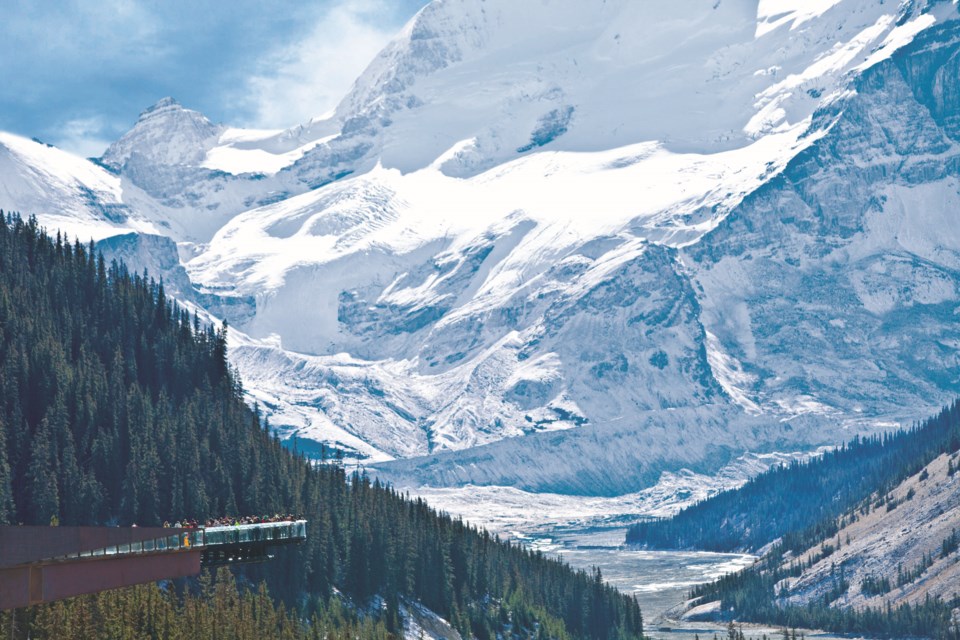 Operations at the Glacier Skywalk and Columbia Icefields Adventure have been suspended after a fatal motor coach rollover on July 18. PURSUIT PHOTO

BANFF – The company operating the Columbia Icefield Adventure and the Glacier Skywalk has suspended its operations to allow officials to investigate a deadly rollover of one of its tour buses over the weekend.

Pursuit Banff Jasper Collection, which has numerous tourism-based operations in the Rocky Mountains, halted all visitation activities at the Athabasca Glacier and its Glacier Skywalk experience Saturday (July 18) after one of its Ice Explorer all-terrain motor coaches rolled down an embankment, killing three and sending 24 to hospital.

President David McKenna said Sunday (July 19) that all efforts are being directed toward supporting the investigation.

"We do not know at this point what the cause of the accident is and it would be inappropriate for me to speculate," McKenna said outside the company's Glacier Discovery Centre. "To that end, we are extending every effort to help the RCMP, occupational health and safety and the Transport Safety Board."

McKenna confirmed the company's driver was injured in the rollover, but could not offer any details on their condition due to the ongoing investigation. He said everyone is deeply saddened by what has happened and efforts are being made to offer support to those affected.

"The RCMP are actively reaching out to friends and family of those impacted and we are on standby to help support those families in the days and weeks to come," McKenna said.

"Our heartfelt thoughts and deepest sympathies are with those who lost family."

Jasper RCMP detachment commander Sgt. Rick Bidaisee said efforts are underway to remove the motor coach from the embankment it rolled down. He said it is too early in the investigation to comment on the cause.

"At this time, no names are being released and we cannot provide any further details on these individuals," Bidaisee said. "Efforts are currently underway to remove the vehicle and complete a mechanical inspection.

"The location is remote and we are requiring the assistance of additional resources."

He asked anybody with information about the rollover to contact the Jasper RCMP at 780-852-3883.

"Again, we are in the infancy stage of the investigation and all steps are being taken to determine, together with our partner agencies, the cause of the rollover," Bidaisee said.

Pursuit has 22 remaining Ice Explorers in its fleet. McKenna said all receive regular maintenance at the company's workshop in Jasper, which is supported through  a contracted heavy duty mechanic in Calgary. He said all drivers have a class 2 licence with an air brake endorsement and receive training on the operations of the Ice Explorers.

Pursuit has a licence of occupation from Parks Canada to operate the roadway to the side of the Athabasca Glacier, which flows from the Columbia Icefield, one of two hydrological apexes in North America..

McKenna said daily maintenance and grading is performed on the roadway while the Ice Explorers travel to and from the glacier.

The incident occurred three months after Pursuit reopened, having shut down its operations in March due to COVID-19's devastating effect on the tourism industry. McKenna said before the coronavirus, the Columbia Icefield Adventure averaged 4,000 visitors a day and this year the busiest day saw 500 people on the tour.

Normally the coaches hold 56 passengers and a driver, but due to COVID-19 the capacity was reduced to 26 passengers.

Tours of the glacier have happened since 1969 and visitation has increased over that time. In an average year, there are 480,000 visitors to the glacier and McKenna said the company has transported 16 million passengers in its specially designed all-terrain vehicles since the early 1980s. He said this is the first fatality involving one of its fleet.

Vice-president of operations Stuart Back said the focus right now is on helping and reaching out to offer support as needed.

"Pursuit has been on site actively supporting the RCMP during their investigation," Back said. "Our priority at this time remains focused on the family and friends of those impacted by this incident, as well as our team, many of whom were first responders."

Of the passengers that were sent to the hospital, four were in serious, but stable condition, six were in stable condition and 14 were in critical, potentially life threatening condition. Injuries to the head and pelvis, as well as leg and shoulder fractures were reported by AHS on Sunday in an update.

AHS indicated due to the difficult terrain at the crash site and lack of road access, some of those injured were triaged and treated before being airlifted to a staging area where ambulances were waiting. The first ambulance arrived on scene at 3:17 p.m. and the last patient was transported to hospital at 8:43 p.m. according to AHS.

Nineteen were transported by ambulance or STARS to the Jasper-Hinton airport and then transferred by fixed wing air ambulances to hospital. Five were taken by ground ambulance to Banff Mineral Springs Hospital or Foothills Medical Centre in Calgary.