KANANASKIS – When Rylie Arnell and a group of her friends set out for a hike in Kananaskis Country, the group had no idea they would witness the final moments of two men's lives.
0
Aug 1, 2018 2:32 PM By: Paul Clarke 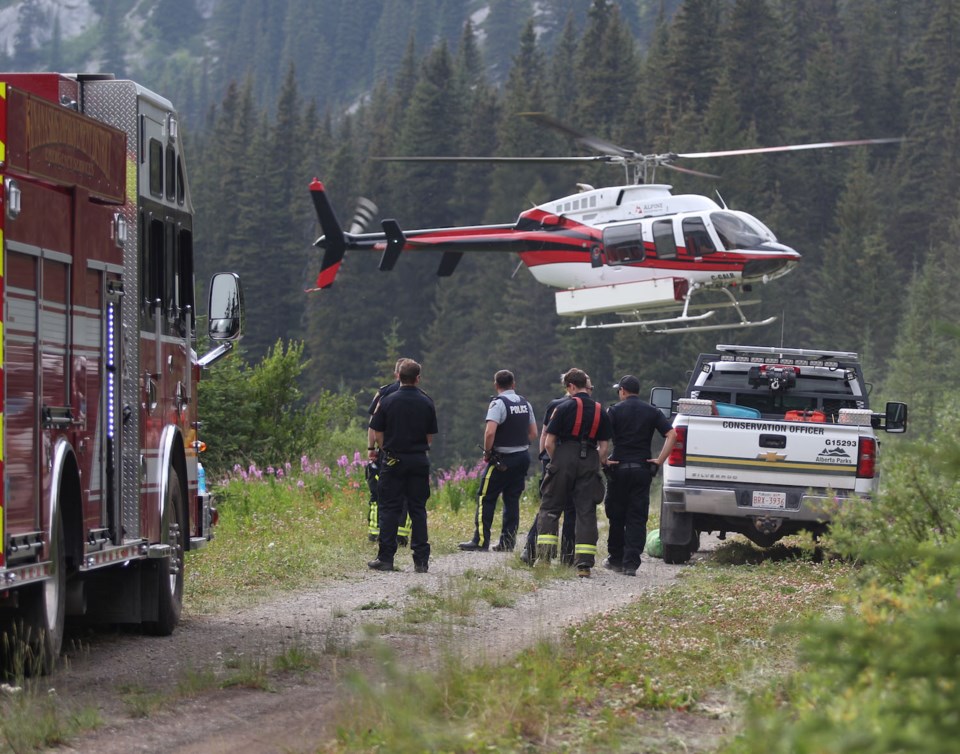 First responders were called out to deal with a twin engine plane crash near Rae Glacier in Kananaskis Country on Aug. 1. The bodies of two men were recovered by Kananaskis public safety specialists.

KANANASKIS – When Rylie Arnell and a group of her friends set out for a hike in Kananaskis Country, the group had no idea they would witness the final moments of two men's lives.

The group was on its way down from Rae Glacier on August 1 when they heard an explosion around 1:30 p.m.

"We just did a hike today up to Rae Glacier and on our descent we were taking a picture of a couple and we turned around and there was a big explosion that happened on the mountain," said Arnell.

Initially, the group was uncertain about what caused the explosion, suspecting that it was hikers setting off dynamite charges on the glacier, but soon figured out it came from a plane that had just crashed.

“A few hours earlier we’d seen five hikers with skis go up the glacier, Rae’s Glacier, and they seemed like pretty active young men, and they were going up the glacier and we lost sight of them. And then an hour and fifteen minutes later, there was an explosion and the flame was approximately a hundred feet tall, and fifty feet in diameter and caused rocks to fall and a big avalanche.”

The RCMP confirmed Kananaskis Public Safety officers recovered two bodies, since identified as the pilot and a survey technician.

They were the sole occupants of the plane.

"As far as we know, they were doing a mapping exercise," said RCMP Cpl. Chris Kosack, following the accident.

"They did hit the mountain known as Mount Rae and then slid down from there."

Eagles Mapping, an aerial mapping company, said it was deeply sadden to learn one of the deceased men was one of its employees.

"We are currently working closely with the authorities to help with the investigation, and we hope to have a better understanding of what happened in the coming days. Out of respect for the privacy of the family, we do not plan to share any additional details until the investigation conclusion."

Chris Krepski, a spokesperson with the Transportation Safety Board of Canada, said the twin-engine Piper PA-31 Navajo plane was owned and operated by Aries Aviation International.

The plane had departed from Pentiction B.C. earlier in the day and was en route to the Calgary/Springbank Airport.

Several phone calls to the aviation company were not immediately returned, but according to media reports it was the first incident the company has had in 23 years of business.

The Transportation Safety Board (TSB) deployed two investigators to the scene to investigate the cause of the accident.

"The investigators spent a couple of hours at the accident site yesterday taking photos, recording information related to the aircraft damage," said Alexandre Fournier, a spokesperson with TSB.

"They've met with the RCMP, they've acquired information from witness statements and they'll be meeting with the company collecting information on the pilot and aircraft."

He said the wreckage is located in very difficult terrain on the glacier so it will take some time before the wreckage can be taken to TSB's office in Edmonton for further examination.

"TSB is not the one taking care of recovering the wreckage, but once it's recovered we'll take it for examination."