EDMONTON — Alberta will officially allow people as young as 40 to get the AstraZeneca COVID-19 vaccine starting Tuesday, with some pharmacies already opening up on Monday.
Apr 19, 2021 3:15 PM By: Canadian Press 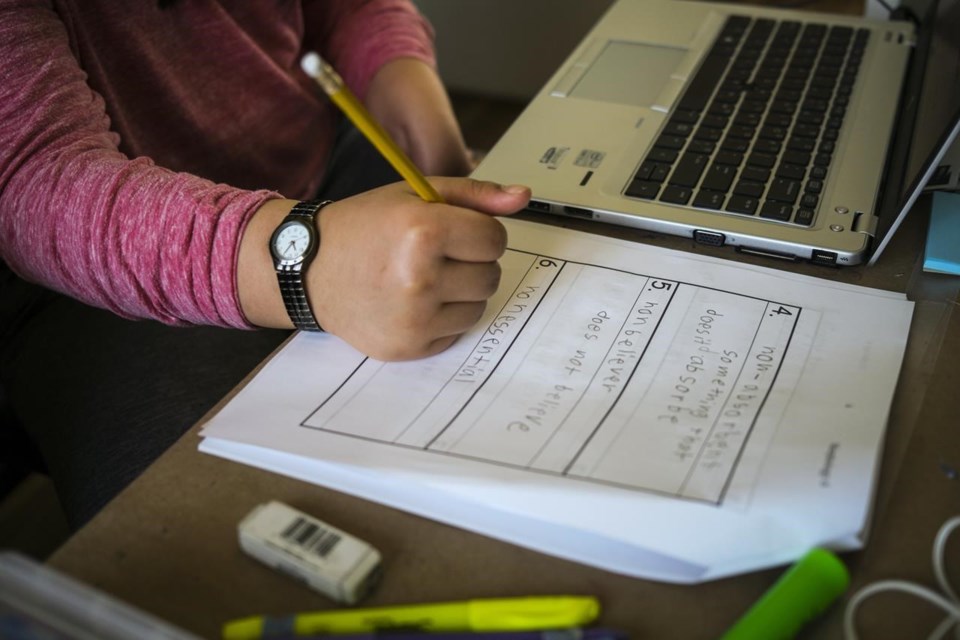 A child writes in their school notebook during a home schooling session in Cremona, Alta., Monday, March 23, 2020, amid the worldwide COVID-19 pandemic. Thousands of students in Calgary will shift to online learning as of today in a bid to curb rising COVID-19 infection rates in the city. THE CANADIAN PRESS/Jeff McIntosh

EDMONTON — Alberta will officially allow people as young as 40 to get the AstraZeneca COVID-19 vaccine starting Tuesday, with some pharmacies already opening up on Monday.

Tom McMillan, who's a spokesman for Alberta Health, says there are about 170,000 doses available and appointments will be booked for as long as supplies last.

He says it's not clear when the next AstraZeneca batches will arrive.

AstraZeneca is one of a number of COVID-19 vaccines being administered, but the only one Alberta is making available to people as young as 40.

There are more than 70 pharmacies offering AstraZeneca, including 26 offering walk-in appointments.

Lowering the age eligibility means 575,000 more Albertans can be vaccinated — for a total of 2.3 million.

Ontario and Manitoba have also made the same age change with AstraZeneca.

McMillan said Alberta reduced the AstraZeneca age to 40 from 55, relying on health data along with earlier concerns that higher-age eligible groups are hesitant about taking it.

There are reports of thousands of AstraZeneca appointments going unused in recent days.

"We're making the decisions based, obviously, on the evidence available. That said, there has been some hesitancy in some groups to book appointments for this vaccine," McMillan said Monday.

"By opening up to (age) 40, we are balancing the evidence around safety as well as the goal of getting doses into people's arms as quickly as possible."

Vaccine hesitancy around AstraZeneca is due to a slightly elevated risk of an extremely rare blood clot disorder, which has so far affected two Canadians — one in Quebec and one in Alberta.

Dr. Deena Hinshaw, the chief medical officer of health, urged Albertans 40 and over to get the AstraZeneca dose.

"I know some Albertans have concerns about recent cases of blood clots. This is understandable, and it’s also important to remember that these cases are extremely rare," Hinshaw said in a news release.

The government said AstraZeneca has been shown to reduce COVID-19 infections by 60 to 70 per cent, and severe outcomes such as hospitalization by 80 per cent.

Alberta currently has the highest rate of active COVID-19 cases in the country, with more than 400 infections per 100,000 people.

Alberta has received 270,800 doses of AstraZeneca and as of Sunday administered just over 100,000.

Premier Jason Kenney has said it has become a race between the spread of COVID-19 variants and getting a critical mass of Albertans vaccinated.

The variants, now the dominant strain in Alberta, are far more contagious and have sent case rates and hospitalizations spiking in recent weeks.

Alberta has almost 18,000 active cases. There were 451 people in hospital, 103 of whom were in intensive care.

Also Monday, thousands of students in Calgary and in northern Alberta shifted to online learning because of rising infection rates.

Education Minister Adriana LaGrange said last week that Calgary students in grades 7 through 12 would make the move to remote classes.

School divisions in Fort McMurray also announced Friday that students in those same grades would be learning from home.

This report by The Canadian Press was first published April 19, 2021.