In 1942 on the windswept Morley Flats east of Seebe and northeast of the Stoney Nakoda Resort & Casino, a camp sprang up at Ozada to house thousands of German prisoners of war.
Nov 10, 2011 12:00 AM By: Rocky Mountain Outlook 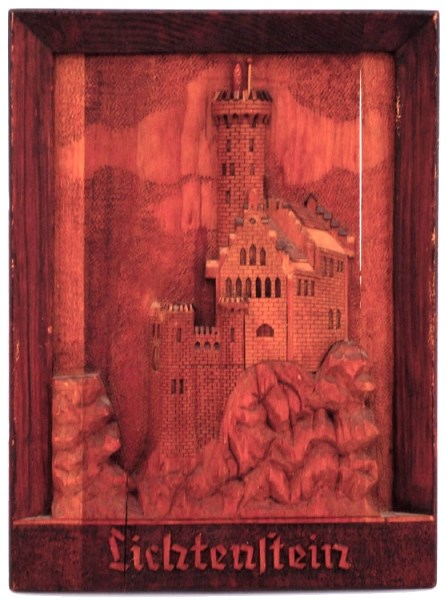 A wooden wallhanging carved at the Ozada prisoner of war camp by a German PoW during the Second World War.

In 1942 on the windswept Morley Flats east of Seebe and northeast of the Stoney Nakoda Resort & Casino, a camp sprang up at Ozada to house thousands of German prisoners of war.

For these PoWs, many of whom served with the Afrika Korps, the Ozada camp, used between May and November 1942 until a permanent camp at Lethbridge was completed, would have been a cold and lonely place and behind the barbed wire, boredom would have been one of the inmates main enemies.

Creating artwork, such as carvings and paintings, was one of the routes PoWs took to keep their sanity and, as Rory Cory, senior curator at The Military Museums in Calgary, said, “try to have a normal life beyond being a PoW.

“It really brings out the human aspect of war, personalizes people. That is one thing we have done here in the past. We talk about battles and campaigns that the Canadians were involved with, but here is something where there isn’t conflict anymore. It’s about people trying to get through with their sanity and about people trying to get through to the end,” Cory said.

“Waiting for the end, combating boredom if you will.”

Even though little remains of the Ozada camp, which for seven months in 1942 housed some 10,000 prisoners in leaky First World War bell tents ringed by a high barbed-wire fence and tall guard towers, part of the Ozada story is coming to life through a piece of artwork.

The piece is a remarkably accurate carved wooden wall hanging of Lichtenstein Castle located near Honau, Germany and measuring roughly 9 by 12 inches – crafted by a German PoW and donated recently to the Army Museum of Alberta at The Military Museums in Calgary.

PoW artwork, made from whatever materials could be scrounged, often referenced a prisoner’s military service or memories of home.

“I’ve seen more than a few artworks carved out of apple crate boxes, and it’s still got the original label from the crate on the back,” Cory said.

One piece, Cory said, made at the Lethbridge camp and now in the Glenbow Museum archives, is of a model ship with sails made from tobacco paper, ocean waves from window putty and the case was constructed from glass taken from a broken barracks window. The ship and its case were dismantled, stored away and forgotten about for 40 or 50 years.

Many of these art pieces made their way into the hands of residents living near the camps during regular flea market days where the art could be bought or bartered for vegetables, eggs, soap, even cigarettes.

“The other interesting thing with the arts and crafts they were making there, is it wasn’t all done to make money. Mostly it was to keep themselves occupied and develop new skills too. This is just the tip of the iceberg of what was going on inside the camp,” Cory said.

“One of the things about Ozada in general was the fact these guys were living in bell tents on the bald prairie, so it is interesting that they found inspiration to be able to make something like this under those conditions. They were really just huddling around a makeshift stove trying to stay warm as snow came down around the bell tent. Really just starting to stay warm,” Cory said. “It’s incredible that somebody found the inspiration to make this.”

Crafted objects, such as the wall hanging, allow venues such as The Military Museums to share the stories of Canada’s military heritage in all its different facets, including PoWs.

The same can be said for photographs of the Ozada camp and an interview with Canadian veteran Doug Hogg available through the Historica-Dominion Institute’s Memory Project website (thememoryproject.com).

In his interview, Hogg explained each of the bell tents had floorboards, bunks and heaters and that the camp itself sat on a square mile of land and surrounded by a high fence of barbed wire and guard towers spaced about 100 yards apart. Large-calibre machine guns were mounted in each tower and the guards, veterans of the First World War, were armed with Reising submachine guns.

Hogg, who served with the Seaforth Highlanders during the Second World War, was sent to Ozada in Oct. 1942, along with the rest of the Highlanders, to support the Veterans’ Guard of Canada to provide security.

The PoWs threatened to riot over a Canadian government directive to shackle the prisoners in retaliation for Canadian PoWs captured at Dieppe who were shackled while held in camps in Germany.

“As I saw it at that time, this could have developed into a very messy situation,” Hogg said during his interview with Memory Project staff. “Ten thousand objecting prisoners, about one thousand heavily armed troops and guards, and a government that wanted its directive carried out. To prevent bloodshed and casualties, somebody had to blink.

“The Canadian government did blink, and we were given the order to stand down. The story we were told was that our government was given assurances that day by the German government that our Canadian prisoners of war would have shackles removed, and no further shackling would take place. To me, this sounded like a comfortable and happy ending, that we accepted, and resulted in our immediate return to Vancouver without incident.”

The wall hanging of Lichtenstein Castle will likely go on display in the Army Museum’s permanent gallery, providing an opportunity to talk about the PoW experience in Alberta.

Cory said an exhibit about the PoW experience in Alberta – For You the War is Over: Second World War POW Experiences – produced by The Military Museums and now at the Red Deer Museum, has helped to raise the profile of the PoW story. The raised profile, in turn, is helping to not only tell the story better, but to save it as individuals begin to see the value of bringing these artifacts to The Military Museums.

“It is the passing of the Second World War generation, even the civilians that bought things at the camps are also passing on, and they are getting to that point that they want to give things to us before they pass on, or their families are getting their estates in order,” Cory said. “Over the next few years, we’ll probably see more of that.”

And Ozada was not the only prisoner of war camp in the Bow Valley.

During the Second World War, prisoners were also housed at Seebe and in Kananasksis near Barrier Lake, where a cabin and a guard tower serve as a reminder of the history of the site that now serves as the University of Calgary’s Barrier Lake field station.