KANANASKIS – It may seem harsh, perhaps even like harassment, but wildlife experts in Kananaskis Country believe aversive conditioning on grizzly bears is one of the best ways to keep both people and bears safe.
Apr 12, 2018 12:00 AM By: Rocky Mountain Outlook 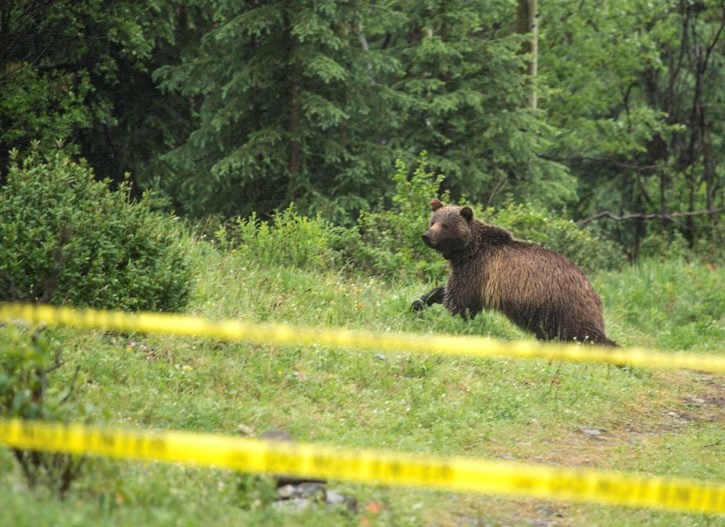 Bear 152 passes by a closed off area near Highway 40 in Kananaskis in 2016. Adverse conditioning is used to keep bears in K-Country away from humans.

KANANASKIS – It may seem harsh, perhaps even like harassment, but wildlife experts in Kananaskis Country believe aversive conditioning on grizzly bears is one of the best ways to keep both people and bears safe.

For almost 20 years, wildlife managers there have used aversive conditioning on bears – a structured program to deter bears away from busy campgrounds, roadsides, picnic areas and day-use areas by using noisemakers, beanbags and rubber bullets.

Wildlife experts say the bears learn to associate undesirable behaviour with a negative experience, teaching them that hanging out in developed areas, or by the side of roads yields no positive reward.

John Paczkowski, an ecologist with Alberta Environment and Parks, said the goal is to teach bears to avoid people and facilities in developed areas in Kananaskis Country and the Bow Valley, keeping bears and people safe.

“Despite quite a number of encounters between bears and people out there on the landscape, negative encounters or severe conflicts are really rare, and especially amongst the bears that are in the aversive conditioning program,” he said at a recent WildSmart talk. “One of the big results with this program over the years, is we’ve been able to sort of let people come to K-Country, recreate there safely and still have bears on the landscape.”

Grizzly bears survive best and need the least amount of management attention in large, remote wilderness areas, but Kananaskis Country now attracts about three million visitors a year and there are areas that are highly developed.

K-Country’s aversive conditioning program started about 20 years ago. It began with the use of Karelian bear dogs through the Wind River Bear Institute, but dogs are no longer used and park staff are now the ones shoeing the bears away.

Aversive conditioning takes a lot of time, dedication, and consistency on the part of staff. They’re out there from dawn until dusk, working alongside conservation officers, keeping tabs on radio-collared bears.

“There were 1,269 events in 2017,” said Paczkowski, noting there are currently only four bears with active radio collars, with plans to capture five more bears to fit with collars. “Six bears accounted for 929 of the 1,269 events.”

Most of the so-called resident grizzly bears in K-Country are considered habituated, meaning they’ve developed a tolerance to people and seldom flee. They’ve more or less changed their behaviour in order to survive.

Habituation starts slowly, but through constant, repeated exposure to people at bear jams and populated areas, it can rapidly progress until bears become increasingly bold and fearless of people.

There are no-go zones for bears in Kananaskis Country, such as campgrounds, picnic areas and day-use areas, as well as the village and Nakiska.

“It’s where we have most of our recreational and human visitation going on and we also have a whole bunch of grizzly bears in there,” said Paczkowski. “We’ve got bears quite comfortable being around people and we’re trying to manage that.”

In some areas, like Interlakes Campground in Peter Lougheed Provincial Park, it’s a big effort for grizzly bears to navigate through a busy area where park managers don’t tolerate bears being.

Grizzly bear 139, a six-year-old female bear that uses this area consistently, was the bear that kept park staff busiest last summer. It’s hoped she’ll emerge from the den this year with cubs given she was seen breeding with a male bear last year.

“She has to run the gauntlet of what we call red zones, so it’s a bit of a juggling act,” said Paczkowski. “She’s a teenage bear and hopefully in the coming years we’ll see the level of actions required for keeping her on the landscape go down.”

On the other hand, there have been success stories. Grizzly bear 80 has been part of the aversive conditioning program for many, many years. She’s thought to be about 20 to 22 years old.

“Most of what we’re seeing on her is just observations and through telemetry, and we’re not really having to condition her anymore,” said Paczkowski. “A lot of what we’re doing is getting those younger bears through the teenage years, where they sort of find their place in the social world of bears, and then we don’t have to go after them anymore.”

As part of the aversive conditioning program, bears will also be pushed off roadsides where they feed on lush vegetation and dandelions, which Paczkowski refers to as the “gateway drug for bears.”

“It’s okay for them to access the food source there, but we don’t want them to linger. We want to typically move them off of those spots,” said Paczkowski.

One battle, like in other jurisdictions including neighbouring Banff National Park, is trying to make sure there are no attractants, such as garbage and food left out at campgrounds and day-use areas.

“There’s a real minefield of potential attractants out there. We’re very vigilant about trying to remove attractants, but they’re out there,” said Paczkowski. “People either don’t know, or don’t care and if a bear gets into any of this stuff, it’s really bad news for the bear and how we manage it.”

Other management tools are also used in K-Country, such as warnings to let people know where bears are, and seasonal closures of areas if there’s a good berry crop, for example. There are also spot closures.

“Some of those closures are proactive where we seasonally close trails. We know berry season is up and there’s a lot of attractants around, and your likelihood of approaching a bear is quite high,” Paczkowski said. “Sometimes we do responsive closures where there might be a carcass in an area that a bear is feeding on, or a bear that’s repeatedly showing up and we’re concerned people might bump into it.”

For the most part, Paczkowski said people in Kananaskis Country do respect closures.

“But sometimes as one CO (conservation officer) says, ‘you just can’t fix stupid,’ ” he said. “Occasionally they will go through, and whether by sheer ignorance, I’m not sure.”

Alberta’s grizzly bears have been considered a threatened species since 2010, but DNA census work has shown the population in K-Country is considered stable to slightly increasing.

“I could list off about six or seven bears that I know of that have lived pretty much their whole adult female reproductive life in K-Country and dozens of cubs spawned from them,” said Paczkowski. “In terms of threatened grizzly bear population in Alberta, I think we’re an important contributor to keeping that population in good shape. We’re going to continue with this program into the future.”