Banffs Boss of bears may be railroading others off tracks

Scientists studying the relationship between grizzly bears and mortality on the railroad tracks through Banff National Park have taken notice of one of the Bow Valley’s furry characters – the Boss – and have discovered the burley bruin may be playing
Feb 2, 2017 12:00 AM By: Rocky Mountain Outlook 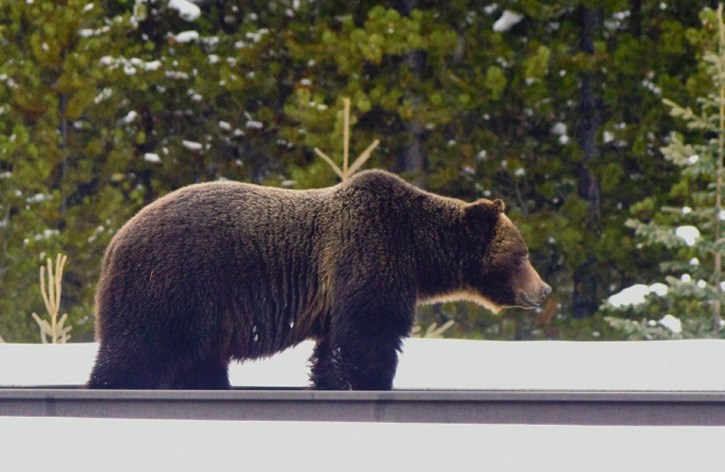 Scientists studying the relationship between grizzly bears and mortality on the railroad tracks through Banff National Park have taken notice of one of the Bow Valley’s furry characters – the Boss – and have discovered the burley bruin may be playing a role in preventing other bears from getting struck and killed.

The Boss – a.k.a. bear 122 – a collared male grizzly bear that has made headlines for being the biggest, baddest bear in Banff, has spent a fair amount of his time along Canadian Pacific Railway’s line that transects the Rocky Mountain National Parks – Banff, Lake Louise and Yoho.

His time on the railway line, as observed by University of Alberta researchers over the past five years, has not resulted in him being killed – although there are reports he has been struck before. But the question scientists are now asking is whether or not his presence on the tracks has prevented other grizzlies from being killed – there hasn’t been a confirmed train related death of a grizzly through the national parks since 2012.

Between 2000 and 2017, 14 grizzlies died on railway tracks in Banff and Yoho and 11 were killed on highways over the same period of time. But without any mortalities confirmed since 2012, University of Alberta research team leader Colleen Cassady St. Clair speculated that bear 122 has kept other bears off the railway tracks and thus prevented them from being hit and killed.

“It is quite plausible that he has reduced activity on the rails by other bears,” she said.

St. Clair has been leading the research looking at all the factors that could relate to grizzly bear mortality on the railway – an issue big enough to invite a $1 million investment from CP for the research project, along with Parks Canada.

She said research has shown there is no single factor that can predict mortality rates, and in fact the relationship between grizzly bears and train mortality might be more about how individual bears react to trains, and use the tracks. But another very significant factor for the rail line is food attractants, especially grain that spills from train cars on the tracks.

St. Clair said researches tried to find factors to predict where grain would accumulate on the railway line and act as an attractant to wildlife, including grizzly bears, which have been seen eating grain, photographed eating grain and necropsies of bears that were killed by trains have shown grain in their bellies.

“To put it in context, it is actually a small amount of grain,” she said, noting one and a half hopper cars full of grain was measured during the five year study. “That same volume would equate in calories to the annual needs of about 50 adult grizzly bears, so that effort to reduce it is well arranged.

“But we found that grain was far from the only attractant along the rail and it may not be the most important one.”

Other species of plants, both natural and invasive, that are sources of food for grizzlies appear to grow readily along the railway right of way due to the fact there is more light for plants to grow. St. Clair said horsetail, for example, is a food attractant that she was surprised to see growing as readily as it was long the railway line. There is also the fact that trains hit elk and deer as well and the dead carcasses left behind also serve as a food attractant.

St. Clair said bear scat collected throughout the study showed ungulate hair in it when they were collected near the railway line.

“The rail brings a lot of natural bear foods; as well, it also connect several patches in the study area of very high quality food. Some of them are natural, some of them human associated,” she said. “And yet, most of the bears we studied that could have used the rail – that was 21 bears that had some of it in their home range – didn’t use the rail and 15 bears used it not at all or very little.

“It is not easy to predict which bears will use the railway and we think the main motivation of these little bears is desperation and the main motivation for this big bear is probably the opportunity to scavenge ungulates that are killed on the rails.”

St. Clair said bear 122 was one of two bears that spent the most amount of time on the tracks over the study’s timeframe – the other being a small sub adult that was struck by a vehicle and killed on Highway 93 last summer.

But bear 122, she said, seemed to be extremely adept at figuring out how to detect trains and then moving off the railway line before being hit – sometimes in a nonchalant manner.

“Bears that detect a train readily seem to leave the tracks at a walk and later than a mother bear might think they should,” she said. “Bears that are surprised by trains exhibit a very pronounced overt reaction of surprise and tend to run away … and they are more likely to run in the path of least resistance, which is often straight down the tracks.”

In fact, St. Clair said the Boss, or bear 122, demonstrated “some behaviour of defending the rail from other bears,” which could have protected those other bears from being hit by trains while they were on the tracks.

With outside factors contributing to bear mortality on the railway line through the Rocky Mountain national parks are much harder to pin down than originally anticipated when the joint research initiative began in 2011, St. Clair said another goal of the research was to identify places where topography and track configuration could be an issue. In fact, several locations along CP Rail’s tracks were identified as being hot spots for bear mortality.

“Our goal there is to be able to identify places where it would make sense to mitigate with train-activated warning devices,” she said.

Those types of devices are still in the research phase, with one of the studies to come out of the joint project currently underway focused on inventing an inexpensive device to warn wildlife in “hot spots” that a train is coming, before it can be heard.

There was more focus on the devices, which have not yet been proven to be effective, for on-track mitigation than there was for electric fencing, which was one of the options examined by researchers when the project began, along with electro-mats that deter animals from crossing them by delivering a sharp electric shock to the pads of their feet as they step onto it.

CP’s Joe Van Humbeck, system manager of environmental assessment and risk, said that mitigation technique is only going to continue as a pilot program for CP Rail’s siding locations, as it has become clear bears are attracted to railway lubricant grease kept at those locations.

How a grizzly bear responds to trains is just one risk factor related to mortality on the railway tracks. Rick Kubian, acting superintendent of the Lake Louise and Yoho field unit, said research has shown there is no “silver bullet” in terms of solutions.

“With a lot of ecological problems, they are really complex and this one was. We recognized that at the beginning and the science-based result the research has outputted have highlighted there is no single solution to this problem and that is a key message we want to get across; that there are no single silver bullets if you will,” Kubian said.

For Parks Canada, he said, the continuing work out of the joint initiative will be to continue its prescribed fire program and tree thinning in areas that have been identified as places where high quality grizzly bear habitat is possible.

The focus on wildlife travel routes long the railway company’s right of way would also be a priority for the federal agency. Officials are expected to work with CP Rail to identify what locations to conduct vegetation management along the line are needed this year, and the next two.

Van Humbeck said the company is committed to providing $250,000 a year for three years for vegetation management.

“One of the findings of the research is that vegetation can play a significant role in these incidents, both by drawing bears to the right of way, where there are other bears and foods found in close proximity to the tracks, as well as preventing bears from getting out of the way of trains such as in areas of heavy brush or tree growth,” he said.

Van Humbeck said the railway company would also continue its work on removing grain spilled on the tracks. He said the company is focused on responding quickly to clean up grain when it is reported to crews as being on the tracks.

Kubian said Parks Canada staff are proactively working to identify the places where grain accumulates and reporting that information to CP Rail so its crews can mobilize its response.

“The thing we were not doing before that is we are going to be more actively involved in creating alternative trails for bears to be able to move past impediments on the rail,” he said. “At those places, those pinch points on the landscape, bears are forced to the railroad and we are looking at a few locations where we might be able to provide alternatives for the bears, so they do not have to travel the railway corridor.”

Beyond that three-year timeframe and financial commitment, neither CP nor Parks could provide any recommendations made from the research to follow or a commitment for further work or financial contributions beyond continuing to work together collaboratively.

“That has been one of the real positive outcomes – a stronger relationship with a key organization,” Kubian said.

“We feel the population is stable in the park and we are pretty happy with the current status of grizzly bears in Banff National Park,” Kubian said.