Banff's WWI trophy had four legs and a saddle

BANFF – At the end of the First World War, Canadian troops returning home from battle in Europe often brought back trophies from the conflict.
Nov 8, 2018 12:00 AM By: Tanya Foubert 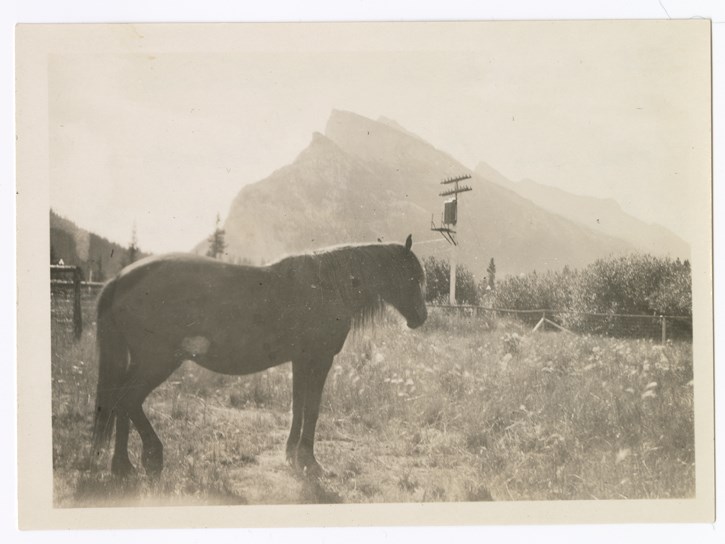 Heinie the Russian pony pictured at the bison paddock in Banff National Park contained in archives and taken by Miros Thom in 1927 during a a trip to the Rocky Mountains.The caption on the back reads: Mt. Rundle in distance. Pony in park at Banff, Alberta. He was taken by the Germans from the Russians, then taken by an Alberta battalion from the Germans and pensioned off here.”

BANFF – At the end of the First World War, Canadian troops returning home from battle in Europe often brought back trophies from the conflict.

While the majority of these war trophies were armaments taken from battlefields after the German forces were defeated in France, Banff was in fact home to one of the most unique war trophies to make its way to North America – a Siberian pony named Heinie.

Heinie was captured by the soldiers of the 31st Battalion Canadian Expeditionary Force from the Germans, who had previously been captured him from the Russians.

“The information we have been able to find shows that during an engagement on the Eastern front between the German army and Russian army, a Russian pony, which was probably a Siberian pony, was captured by one of the German units,” said Parks Canada cultural resource management advisor Steve Malins.

“Horses were really important during the First World War … from both the military perspective of tactics, but also for the military supply chains for all the major forces during the conflict.”

Horses were so important during the war, Malins added, that soon after war broke out in Europe, the British Remount Commission began obtaining horses for the army from across Canada, including from Banff. A mention in the Crag and Canyon from October 1914 indicates the British Army was officially purchasing horses from the Brewster Ranch. By the end of the conflict, 40,000 to 50,000 horses went overseas to support the war effort, but very few, if any, returned. Armed forces were ordered to leave horses behind for civilian use in the aftermath of the conflict, but it appears Heinie was a special exception.

Siberian ponies were sturdy horses and known to be used by the Cossack regiment of the Russian military during the Great War, which lasted from 1914 to 1918. According to the Dominion Parks Branch annual report from May 1920, Heinie was captured by the Germans during battle at Masurian Lakes on the Eastern Front of Prussia during the early stages of the war and remained with them until he was taken by the Canadians.

The 31st Battalion, which was an Alberta based regiment, was part of Canadian forces that were successful in the Battle of Amiens. In his book History of the 31st Canadian Infantry Battalion (1914-1919), Horace Singer details the battalion’s efforts beginning on Aug. 8, 1918 in France. It was the beginning of the offence that later came to be known as the 100 Days and ultimately led to the end of the war.

Under the command of Liet.-Col. A. H. Bell, the battalion was part of the British Forces that took on a much larger German army on the ground in Amiens. Commander of the Canadian Corps General Sir Arthur Currie wrote about the battle at Amiens, which lasted until Aug. 22 and where they fought 15 German divisions, 10 of which were directly and thoroughly defeated.

“In the same period the Canadian Corps captured 9,131 prisoners, 190 guns of all calibres, and more than 1,000 machine guns and trench mortars. The greatest depth penetrated approximately to 14 miles, and an area of over 67 square miles containing 27 towns and villages had been liberated. The casualties suffered by the Canadian Corps in 14 days of heavy fighting amounted to 579 officers and 10,782 other ranks. Considering the number of German divisions engaged and the results achieved, the casualties were very light.”

It was in the French town of Rosieres where Singer’s history of the battalion recounts that Heinie was captured. He became the mascot for the 31st and they required special permission to take him with them across Europe and to England after Armistice Day.

“With mixed feelings of joy at the prospect of going home and reluctance at leaving England, the men in the early hours of May 19 (1919), entrained for Liverpool where the steamship ‘CEDRIC’ awaited them,” Singer wrote. “With sirens blowing and farewells from many friends who had come to see them off, the members of the Battalion embarked at 4 p.m.

“On board was ‘Heinie,’ the Russian pony, which had been the regimental mascot ever present since its capture at Rosieres – smuggled aboard at Le Havre despite the protests of immigration officials, and now, after its wanderings with the Battalion on the Continent, on its way back to Canada.”

The 31st was stationed at C.E.F. Calgary, but was disbanded after the war and Heinie was gifted in 1919 to the superintendent of Rocky Mountain National Park to be added to the animals kept at Buffalo Park, later known as the bison paddock just outside the townsite of Banff.

“He lived out the rest of his life there, but he wasn’t just a tourist attraction,” Malins said. “He did not stop working, but appears to have been well taken care of by dominion parks branch at the time.”

Heinie was a sturdy work horse and his usefulness continued as a part-time pack horse for park wardens in Banff. The archived journals of park warden Walter Peyto show the pony was signed out on occasion for back country trips.

Excerpts from Peyto’s journals from 1914-22 provided by David Peyto to the Whyte Museum of the Canadian Rockies show that Heinie worked on Oct. 31, 1919 and was taken to a sheep pasture. On Sept. 11, 1922, Peyto wrote “west on auto road and across to pasture, turned out Heinie and caught up Goldie my saddle horse.”

Journals from 1923-28 recount five times Peyto worked with Heinie, including Oct. 14-15, 1924: “packed up and left for ranch (Ya Ha Tinda) with 17 heads of horses, two packs, two saddles and Heinie via Stony Creek and Pass to cabin on branch of Dormer River (south Panther), newly cut trail over pass work, horses took to shale slide on mountain.”

On Sept. 4, 1925, Peyto wrote “took Heinie and mare from stable and turned out in meadows west of Banff.”

On Sept. 7, 1927, Warden Peyto recorded in his journal that he helped catch Heinie in the paddock to move him to the Banff Zoo in Central Park.

Malins said Heinie was moved from the paddock, as it was determined only the herd of wood bison would be kept there, and moved to the Banff Zoo, located behind the Park Museum and home to a variety of display animals, including a polar bear.

Peyto’s final journal entry about Heinie was from June 19, 1928: “caught up work horse and Heinie for paddock at Zoo.”

Archives of the Crag and Canyon from May 21, 1921 also saw Norman Luxton report on Heinie’s activities as part of the government’s efforts that year to eliminate the mosquito nuisance in Banff “which drove so many people from the village last summer.”

In the short article, Luxton wrote that Norman Bethune Sanson, curator of the Park Museum at the time, was in charge of the work.

“N.B Sanson has charge of the work of spreading oil on ponds and bodies of stagnant water, the coating oil having been found to be most effective method preventing the breeding of mosquitoes. With ‘Heinie’ the captured German pony bearing the cans of oil, Mr. Sanson is giving a thorough coating of oil to all still water and visitors will not be obliged to work overtime this summer in fighting the pesky skeeters.”

Malins said Banff also received a 77 millimetre German field gun as a war trophy and it was located outside the superintendent’s office, which was at the Park Museum at the time. It is unclear what happened to the gun after it was removed, but he added these kinds of trophies were commonly found in Canadian communities after the war and located at cenotaphs that commemorated the 66,000 soldiers killed during the war.

“You still see some of the actual First World War trophies on display in some communities,” Malins said, like Crowsnest Pass and Coleman, Alta.

While the 31st Battalion ended its tenure after the war, it was perpetuated through the South Alberta Light Horse, part of the 41st Canadian Brigade Group in Alberta based in Edmonton, Lethbridge and Medicine Hat.

By all accounts, Heinie had a storied life that began in Siberia and saw him survive four years of war before being pensioned in the Rocky Mountains of Alberta where his usefulness continued to serve a purpose.