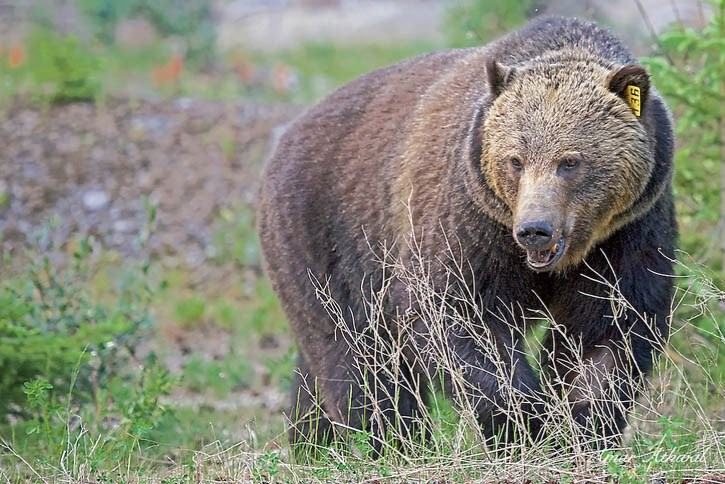 Bear 136, a 225-kilogram bear nicknamed Split Lip, is thought to have killed and eaten a smaller male grizzly bear, a 90-kilogram bruin known as bear 132 in the remote Mystic Pass area of the park.

“We don’t have any way to confirm that 136 indeed killed 132, though there is a strong likelihood 136 did kill him,” said Steve Michel, human-wildlife conflict specialist for Banff National Park.

“All we really know is he fed on 132 and consumed it. Whether he was killed by 136 or whether he died by natural causes and then was scavenged by 136 is an open-ended question,” he added.

“However, we know that large grizzly bears will certainly take advantage of any food source they can, including young grizzly bears, older grizzly bears, black bears and the more typical ungulate prey species.”

Bear 136, dubbed Split Lip for a scar that led to a disfigured lip, and bear 132 were both research bears in a GPS collaring project as part of the Parks Canada-Canadian Pacific Railway joint action plan.

Resource conservation officers came across the carcass of bear 132 in the Mystic Pass area last Thursday (Oct. 29) when they went to investigate why bear 136’s GPS collar had sent a mortality signal a couple of weeks earlier.

When a GPS collar goes into mortality mode, it means the collar has not moved at all for a 12-hour period. That can mean the animal has died, but it can also mean the collar has fallen off.

It appears 136’s GPS collar came off when he was rubbing against a tree.

Michel said as resource conservation officers located and retrieved the collar, they noticed the carcass of another grizzly bear.

“It was fully consumed at this point and they were able to retrieve the skull of the deceased bear from the site,” he said.

Bear 132, thought to be about 10 years old, had dropped his collar earlier in the summer when trying to take down an elk near Elk Lake Pass. No ear tag was found at the site of his death at Mystic Pass.

Michel said, however, that he is confident the deceased bear is 132 based on the unique teeth pattern, including a missing canine and a crooked tooth.

“We had photos of him when we were handling him as part of the capture, and we compared those photos with the skull, and it certainly looks like it’s the same animal,” he said.

“We can say with 99 per cent certainty that it is this animal, but we will send off some DNA samples just to confirm.”

It is not uncommon for bears to kill and eat other bears.

Bear 122, the well-known 275-kg dominant male in the Bow Valley, killed and fed on the carcass of a black bear in the summer of 2013 off the popular Sundance trail near the Banff townsite.

Michel said it’s also possible that bear 136 is responsible for killing cubs belonging to grizzly bears 130, whose home range includes an area from Banff to Castle, and 138, who lives in the Lake Louise and Skoki region, in the early summer of 2014.

“They both came out of their dens with two young-of-year cubs. They had them with them in the springtime and then lost them in early June or into July,” said Michel.

“We suspected 136 may have been involved in those incidents, but we didn’t have a collar on him at that time. We were not able to verify with 100 per cent certainty it was him, but he was in the area.”

Grizzly bears are still searching for food to fatten up as they prepare to head into the den. This year was not a great year for berry crops, a high-calorie food source for bears in this area.

Michel said he suspects the incident with bear 132 was an opportunistic feeding opportunity for bear 136.

“From a food perspective, any time a grizzly bear is able to get a large mammal carcass is a windfall heading into hibernation,” he said. “Unfortunately, it’s a grizzly bear, but that’s how things work in nature.”

Michel said it wouldn’t be unexpected for a grizzly bear to eat a carcass or two in the fall months, such as elk, moose or sheep.

He said he suspects bear 136 will be active until about Christmas before denning for a couple of months.

“I suspect 136 may well have had access to other carcasses and will again before hibernation, so that’s good news,” said Michel. “That will help him put on the necessary weight to get through the hibernation period.”

Bear 136, along with bear 122, forced closure of Vermilion Lakes Road in June 2014. They were on the road at the same time during the breeding season, sparking concerns they could get into a fight over a female bear.

Because bear 136 no longer has a collar, park staff have no idea where he is at the moment or what he’s been up to.

“He can cover a lot of ground,” said Michel. “He’s a classic large male.”

One of the research bears, known as 144, was destroyed by provincial fish and wildlife officers in July when left the national park and killed several sheep and llamas on a farm near Sundre.