A food-conditioned black bear that had been making the rounds in Canmore, Harvie Heights and Dead Man’s Flats in search of human food and garbage has been relocated out of the area.
Jul 1, 2015 12:00 AM By: Rocky Mountain Outlook 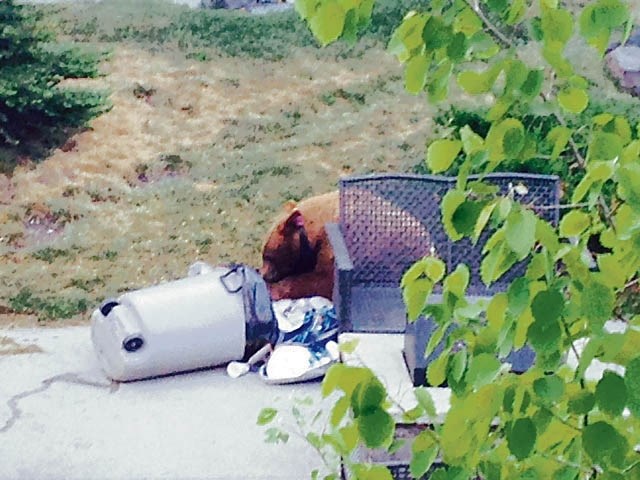 A food-conditioned black bear making the rounds in the Bow Valley has been relocated.

A food-conditioned black bear that had been making the rounds in Canmore, Harvie Heights and Dead Man’s Flats in search of human food and garbage has been relocated out of the area.

The collared bear, tagged as bear number 1403, was darted and captured near the pony club in Canmore Saturday (June 27), and moved out of his home range to an area north of the Bow Valley.

Provincial fish and wildlife officials don’t like to move bears out of their home range, but human-wildlife conflict biologist Jay Honeyman said they had little choice because a food-conditioned bear is too much of a threat to public safety.

“He was an habituated, food-conditioned bear and once a bear starts getting into food that steps up the public safety concerns, because the bear starts associating developed areas as a food source,” said Honeyman.

“That’s way different from a bear just being used to people. There’s not really a lot of choices once a bear is food conditioned.”

The young bruin was collared last summer by Parks Canada in Banff after he got into garbage in the townsite. It is also suspected he was hand-fed food.

Earlier this month, the bear was found eating garbage out of an unsecured bin at Copperstone Resort in Dead Man’s Flats.

According to wildlife officials, the bear was eating garbage out of two bins in the resort’s common area. The bins were not bear-proof, but the issue has been resolved.

Honeyman said there are also some commercial bins in Canmore that are not bear-proof.

“Some have broken latches or warped lids and don’t close properly, so they are not bear proof,” he said.

Residents and businesses are being encouraged to do a better job of properly storing garbage to try to prevent others bears from coming into developed areas.

“It’s looking at what’s preventable. Had the incidents with this black bear not happened that black bear may still be here,” said Honeyman.

“These are things we can manage for and we need to do a better job collectively on doing those.”

The future for bear 1403 is uncertain, but because the bear is collared, wildlife officials will be able to keep tabs on him.

“It’s not good to be dropped into an area you don’t know and to be competing with other bears that know that area,” Honeyman said.

“He could do OK, he may not do OK. He could conceivably end up back here. They can travel long distances and we’ve had that happen before.”