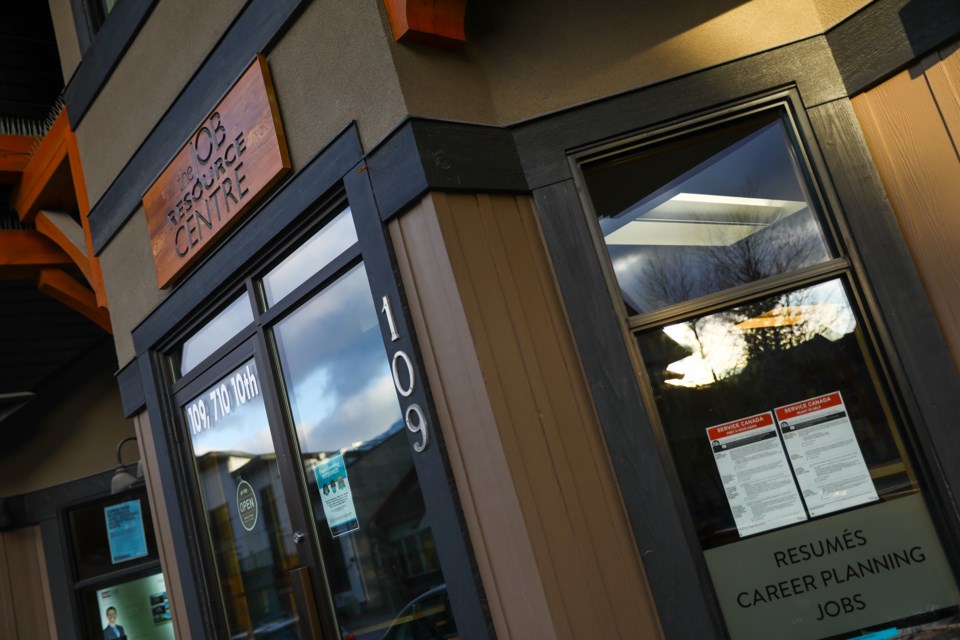 BOW VALLEY – This spring was anything but ordinary.

That's according to the Job Resource Centre's recently released Bow Valley Fall 2020 Labour Market Review, in which officials acknowledged the significant impacts of the COVID-19 pandemic in Canmore and Banff.

“Ordinarily, early spring is the lead-up to peak tourist season in the Bow Valley," stated the report. "This spring was anything but ordinary as the coronavirus pandemic swept across the world, closing international borders to travellers, closing local ski areas prior to the end of winter season, and significantly disrupting spring/summer recruiting plans for local businesses.

Unemployment rates had not been seen that high since the early 1980s, according to the report and were a direct result of the COVID-19 pandemic and reduced tourist traffic. Back in March, provincial government and health officials mandated the closure of non-essentials businesses raising unemployment numbers throughout the province, with mountain towns hit especially hard. Early reports estimated unemployment as high as 85 per cent in Banff.

“What we have right now is half a market, hotels operating at half capacity with half the staff," said Michel Dufresne, director of the Job Resource Centre.

But despite the higher unemployment rates earlier this year, the Bow Valley labour market trends showed an increase in starting wages, up $19.14 per hour during the six month period compared to last year's average of $17.78.

Meanwhile, average rental rates increasied only slightly in Banff and Canmore when compared to the 2019 review.

Shared housing increased in Banff and decreased in Canmore, with the average roommate cost at $954 up from $876 in Banff, and down to $843 from $875 in Canmore.

In the business for 21 years, celebrating its 20th anniversary last November, the Job Resource Centre partners with the federal and provincial governments to provide employment support programs and services.

Dufresne said there have been many highs and lows since the centre opened over two decades ago.

“The first couple of years, you think you might get five years [running] then it’s 10, then it’s 20 and now 21 – I’m really happy with how far we’ve come and we are an important part of the community and we like to think that we help the labour market function,” Dufresne said.

“You know, some of the negative highlights are the crises we’ve faced along the way – stuff that kind of jabbed the economy, so the epidemics, the pandemics, SARS, the floods, the 2008 crisis – it was always a challenge to go through that stuff for us and for the community and employers and labour market.”

The Job Resource Centre also had to change its approach during the pandemic with a shuttered office front for three months during the spring, it now offers video conferences, job posting in the office windows and an online job board.

“We had to do what other people had to do and move online and it worked really well,” Dufresne said.

“We were scared of that before, [but] now we are probably more effective because we have more platforms.”

According to the fall 2020 report, the number of job ads in the Bow Valley from February to July this year was down by almost half, with only 1,197 postings compared to the 2,240 jobs posted the same time last year.

But it is a resilient market.

Dufresne pointed to the vibrancy of the mountain towns, particularly Banff and Canmore, especially when the economy is going full force.

“The tourists flock to the place and it was so busy [in Banff and Canmore] that we were experiencing staff shortages," he said. "You know, staff shortages are not good, but it shows how well we are doing … you want to have to be looking for people.”

And the market is starting to pick back up.

With ski resorts having some of their earliest opening days in their history, Dufresne said he thinks the market will continue to improve – if the province avoids another lockdown.

“I hope not to see another lockdown, but it’s possible though. We have another six months until next spring … so I’ll be interested in hearing what [Chief Public Health Officer] Dr. Deena Hinshaw has to say.”