Straight outta Banff: the overwhelming and painful struggle of being a wolf in the Bow Valley.
Aug 11, 2016 12:00 AM By: Rocky Mountain Outlook 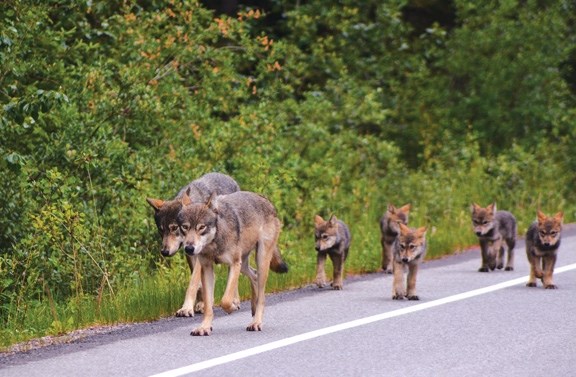 The Bow Valley wolfpack on Highway 1A in Banff in early July.

Straight outta Banff: the overwhelming and painful struggle of being a wolf in the Bow Valley.

The mountainous Bow Valley is a beautiful location for tourists to visit and locals to live, but for large carnivores like wolves, home presents a day-to-day struggle to survive, said a wolf expert.

Six wolves have died of unnatural causes this year in the Bow Valley and Paul Paquet, a recognized wolf expert who has studied wolves in Banff, didn’t mince words on what to call the habitat wolves and other wildlife live in.

“People need to understand, the Bow Valley has two townsites that are growing, two highways, a corridor for high transmission power lines, dams, golf courses, ski hills … They’ve got all that in the valley, so you can imagine the responses for the wolves and wildlife – it’s a ghetto for them and they’re trying to survive in there.”

Last week, a young wolf was killed by Parks Canada wildlife managers after it had gotten into food and garbage left out by campers at a Banff campground.

The wolf had been involved in multiple incidents between July 29 and Aug. 1 at Two Jack Main and Lakeside campgrounds.

The yearling had received food rewards and showed “bold behaviours towards people,” wrote Christina Tricomi, a Parks spokesperson, in an email.

“This wolf did not respond to aversive conditioning and continued to return to campsites after being repeatedly hazed,” wrote Tricomi.

“This action was taken after serious consideration. This was a very difficult decision for Parks Canada staff, who work so hard to protect these animals; but in the end, it was a necessary action to ensure visitor safety.”

The wolf was the second Bow Valley wolf pack member killed by wildlife managers this year due to visitor safety concerns from becoming food-conditioned – the other being a breeding female in June.

The decision to shoot and kill the animals came despite Parks Canada’s measures for public “communication, compliance and enforcement to ensure wildlife in the park do not become food-conditioned.”

The troubled Bow Valley pack has lost six members this year due to unnatural causes, including four young-of-year pups that were struck and killed by trains.

The survival of the Bow Valley wolf pack is in jeopardy, said Paquet, but he doesn’t think this news was not unexpected due to “legacy decisions” Parks made two decades ago.

“We’re seeing the development and commercialization of the park over ecological integrity and this is what the consequences are. It was not only predicted, but occurred continuously,” said Paquet, referencing a 1996 Banff National Park Management Plan.

This past month, Parks wardens charged 20 campers in sites for “unsatisfactory campsites,” including at least eight charges last week.

Charges include leaving out food and garbage as a wildlife attractant.

The charge requires a mandatory court appearance and a fine up to $25,000.

“Visitor and wildlife safety is of utmost importance to Parks Canada,” wrote Tricomi, in a July 27 email. “Wolves, like many animals in Banff National Park have learned how to exist in and around humans, however, we need to help them retain their natural fear of people so that they do not become used to human contact that puts ourselves and them at risk.”

Campgrounds and picnic areas in the Bow Valley of Banff National Park are under a wolf warning that began in early June.

However, there are no current area closures inside the park.

On Sunday (Aug. 7), an uncollared wolf ventured into the Two Jack main campground to search for food. The wolf was hazed away twice by wildlife managers. The following morning, what is believed to be the same wolf was seen searching through the Tunnel Mountain campground.

It is unknown whether the wolf(s) received any food rewards in either area.

Paquet believes Parks wildlife managers have done a very good job attempting to protect wildlife and control campgrounds, but to do so is “very difficult, if not impossible.”

Paquet added he would immediately shut down Highway 1A in the park, west of the Banff townsite.

The area is a hotspot for tourist attractions and includes the Johnston Canyon and Castle Mountain campgrounds, which have had problems with human and wolves and bear encounters this year.

“This is the crown jewel, the first Canadian national park,” said Paquet. “If wolves can’t live there, where can they live?”