The research paper out of the ROM released Wednesday (Sept. 11) in the journal Nature, describes a scorpion like creature that was likely a “fierce predator” in what was once a sea floor and is now the vast mountains of the Rockies
0
Sep 11, 2019 11:12 AM By: Alana MacLeod 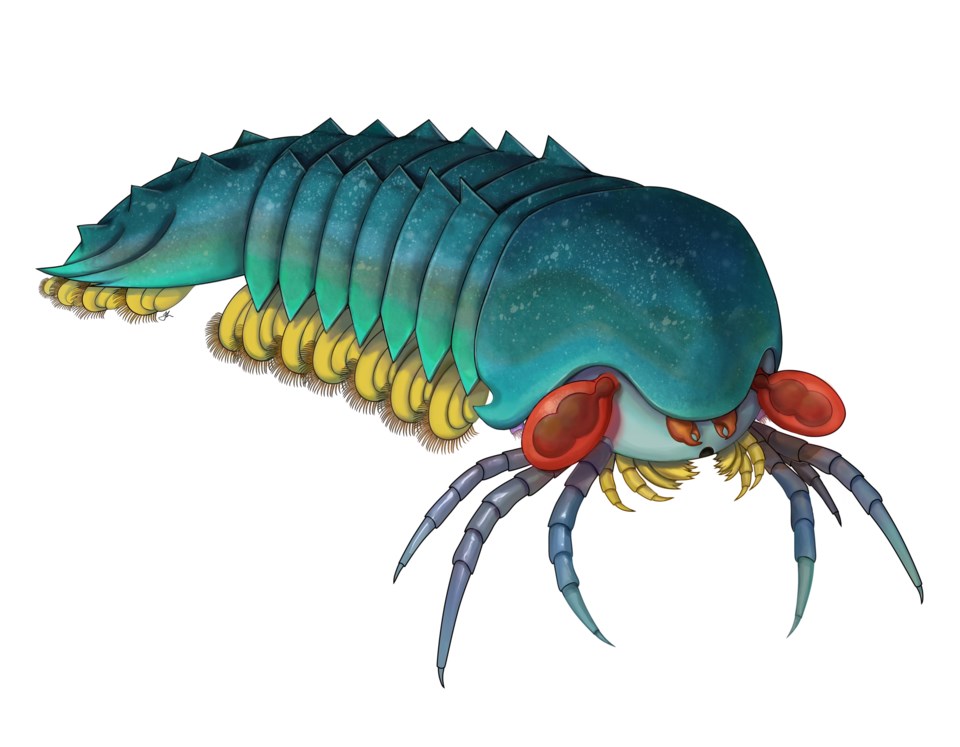 Reconstruction of Mollisonia plenovenatrix, by Joanna Liang. Mollisonia was only about 2.5 cm long. ROM PHOTO.

MARBLE CANYON, B.C. – “A pair of large egg-shaped eyes and a ‘multi-tool head’ with long walking legs, as well as numerous pairs of limbs that could all-together sense, grasp, crush and chew.”

That's how the Royal Ontario Museum (ROM) in Toronto describes Mollisonia plenovenatrix, the newest species found at the Burgess Shale site in Marble Canyon in Kootenay National Park – the oldest known chelicerate (a major subdivision of the phylum Anthropoda) dating back to 500 million years ago.

The research paper out of the ROM released Wednesday (Sept. 11) in the journal Nature, describes a scorpion like creature that was likely a “fierce predator” in what was once a sea floor and is now the vast mountains of the Rockies.

“Most importantly, the new species also had a pair of tiny ‘pincers’ in front of its mouth, called chelicerate. These typical appendages give the name to the group of scorpions and spiders, the chilcerates, which use them to kill, hold and sometimes cut, their prey,” stated the press release from the ROM.

Jean-Bernard Caron, the Richard M. Ivey curator of invertebrate paleontology at the ROM and leader of many field expeditions unearthing new fossils, told the Outlook the species connects to a fossil found over a hundred years ago.

“We have an animal here that we found at Marble Canyon that connects to a fossil that was described more than 100 years ago by Charles Walcott from the Burgess Shale,” he said.

Mollisonia plenovenatrix preserved in dorsal view,showing the large eyes, the walking legs and thesmall chelicerate at the front. ROM PHOTO
“At the time, Walcott described the animal based only on some elements of this animal. The only elements he had were what we call the exo-skeleton … There was no evidence of soft tissues.”

Caron explained that Marble Canyon site, found back in 2012, has yielded many different fossils of this particular animal from many different angles and some including soft tissue.

“When we found the first fossil of this guy with soft tissues, everyone said ‘wow, hoo-ra,’ This is a great day for us,” said Caron, adding that the discovery of the soft tissues was paramount to researching what exactly this specimen was.

Caron and other researchers involved in studying Mollisonia believe it was likely a small, but mighty predator that would have hunted close to the floor of the sea.

“Because Mollisonia is so modern-looking, chelicerates seem therefore to have prospered quickly, filling in an ecological niche that was otherwise left poorly attended to by other arthropods at that time,” the ROM release said.

Since its discovery in 2012, the Marble Canyon Burgess Shale excavation site has yielded quite a few new species, like the Cambrorastor announced in July, some of which don’t necessarily seem lucrative in other sites like the Walcott Quarry.

“There’s probably several differences that we don’t really understand well what happened between the different environments, but there’s definitely different fossils, what we call fossil assemblages, that show that the community of the Burgess Shale varied quite a bit from place to place,” said Caron.

“Every time you move a few hundred metres, or a few kilometers, you have a chance then to compliment the story of the Burgess Shale community in some way because you may have a chance to find new species as well, and that’s exactly why at Marble Canyon we’ve found many new species.”

For Caron, the newest discovered site has been a highlight in his career and Mollisonia is its newest accomplishment. For more information on the species or the Burgess Shale discoveries, visit the ROM website at www.burgess-shale.rom.on.ca.