With two national teams calling Canmore home and a world-class Olympic legacy venue located in the community, it should come as no surprise the mountain town is the place of residence of more winter Olympic athletes per capita than anywhere else in C
Feb 8, 2018 12:00 AM By: Rocky Mountain Outlook 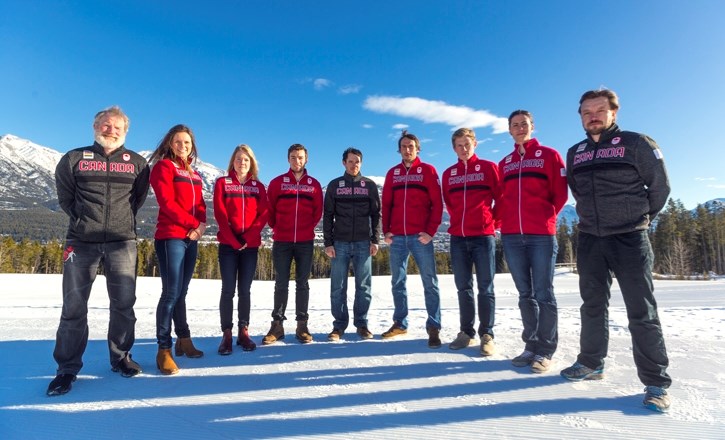 Members of Canada’s national biathlon team competing at the 2018 PyeongChang Winter Olympics. Many of whom live and train in Canmore.

With two national teams calling Canmore home and a world-class Olympic legacy venue located in the community, it should come as no surprise the mountain town is the place of residence of more winter Olympic athletes per capita than anywhere else in Canada.

Through a statistical analysis of the full Canadian Olympic Committee roster of athletes competing in PyeongChang, South Korea beginning this week, the Rocky Mountain Outlook determined that, on a per capita basis, Canmore has more winter Olympians than anywhere else.

With 20 winter Olympians residing and training in Canmore, and a population of 13,992 permanent residents as per the 2016 census, that sets a rate of 0.00143 on a per capita basis.

Calgary is a distant third with 51 athletes residing in the Alberta city with a population of 1,239,220 and a per capita rate of 0.00004 winter Olympians.

It came as no surprise for Canmore Mayor John Borrowman, who has seen generations of winter athletes grow up or develop in the community after the 1988 Games were hosted locally.

With the Canmore Nordic Centre a legacy venue of those Games, the national cross-country and biathlon teams are based in the community, which is why there are so many local athletes in South Korea this year.

“I have had a lot of conversations around how the Olympics in 1988 changed our community,” Borrowman said. “Now we identify ourselves as a mountain sport community and that has informed our whole lifestyle and so many things about our community over the last 30 years. Not only winter sports, but summer sports as well.

“Having hosted the Olympics helped define who we are and I think helped send so many Canmore Olympians (to the Games).

“It is a vibrant, exciting town in a beautiful location with great access to amazing outdoor pursuits – that is why people are living here and are still happy to call Canmore home.”

Banff’s Jan Hudec is heading to the Games as well from the Bow Valley, although will compete with the Czech alpine team after a falling out with Alpine Canada last year.

Borrowman is also going to PyeongChang as part of a delegation with the City of Calgary’s bid committee. Calgary has been engaged in a process to assess whether or not to submit a bid for the 2026 Winter Games, with Canmore as a potential host for snow sports like biathlon and cross-country.

The mayor already planned a trip to Australia during council’s February break to visit his grandchildren, and he flies out of that country to South Korea later this month.

He said the focus of his trip to PyeongChang, where the mountain-based sports are being held, is to get a detailed understanding of the logistics around a modern day Olympics.

“If we are going to host the Games here, or at least be part of a Games, there would be certain facilities we would be expected to provide in Canmore and we need to see how they would fit into our community,” said the mayor.

“The housing component is not that hard to wrap your head around … but other components I am going to be curious about is the celebration plaza, for example.”

Borrowman said the possibility of a 2026 Olympics in Canmore would have implications for local infrastructure and with several items already on the long-term capital plan, or pushed off it repeatedly like a downtown enhancement plan, he said the Games would provide the context within which those priorities could be reached.

“I am really looking forward to finding out, or seeing how those types of facilities fit into the community in South Korea,” he said. “There are so many things we could get out of hosting an Olympics that we have identified as needing, but haven’t the funding or ability to do everything.”

The delegation team includes Chief Administration Officer Lisa de Soto, Minster of Culture and Tourism for Alberta Ricardo Miranda, and City of Calgary officials. The plan includes meeting with officials that planned the PyeongChang infrastructure and operational delivery of the events, as well as high-level sports bodies like the Canadian Olympic Committee and International Biathlon Union.

Meanwhile, the Town of Canmore has officially launched its engagement process to explore the idea of a 2026 Olympic bid. A survey is available online for residents to take that explores the legacy of the 1988 Olympic Games and what the community would want to see out of a 2026 event.

The survey is live until Feb. 23 and available through www.canmore.ca, while an open house is scheduled for Tuesday (Feb. 13) from 4-7 p.m. at the Coast Hotel.

The goal of the consultation process is to foster productive community dialogue to help decision makers as they consider the potential bid.