The designer of the climbing wall that will be part of Elevation Place has been chosen. Walltopia, which operates on four continents and was founded in Bulgaria, is the award-winning bid for the facility.
May 31, 2012 12:00 AM By: Rocky Mountain Outlook 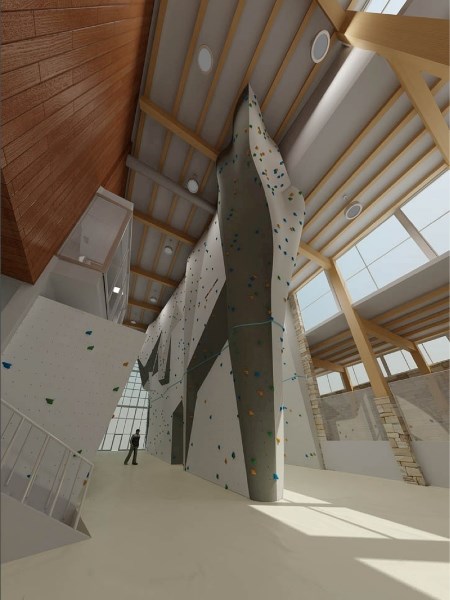 The designer of the climbing wall that will be part of Elevation Place has been chosen.

Walltopia, which operates on four continents and was founded in Bulgaria, is the award-winning bid for the facility.

The company was chosen by a committee made up of climbing community stakeholders and the municipality.

Canmore Junior Climbing Team Society co-chair Steve Frangos said the committee paid a lot of attention to choosing who the right builder would be.

He added the request for proposal process set up by the Town generated four highly-qualified international bids from companies well known in the climbing world.

“All four proposals were fantastic,” Frangos said, adding the wall must be accessible to a wide range of users from novices to elite athletes.

The climbing gym facility in Elevation Place will have 4,000 square feet of floor space and Walltopia is providing approximately 11,000 sq. ft of vertical climbing wall surface.

A specific bouldering-only wall has about 1,500 sq. ft of wall surface and bouldering will be on all walls up to a 15-ft height.

The tallest climbing wall will be 45 ft high and has a prow feature that overhangs the entrance to the facility. There is also a moose hole feature that connects the two separate rooms that form the gym.

There is a speed wall on a 30-ft high wall and a training area that uses a surface material called Rocktopia.

The bid awarded to Walltopia is worth $600,000 of the overall $39 million multiplex budget and includes design, build and installation, as well as providing the climbing holds, flooring and speed wall timers.

Renowned adventurist and climber Will Gadd spoke at an event for the climbing community last Friday (May 25) after the design award was announced.

He said he is excited for the climbing gym facility to be developed as there are many benefits to the sport, especially for youth in the community.

“We see the benefits in the youth team already,” he said. “There are kids out there that need high energy stimulus – it is a healthy thing to do and a life-long thing to do.”

However, with the Vsion climbing gym closing its doors at the end of May, there will be no indoor climbing facility in Canmore until Elevation Place opens its doors.

The concern about that gap in facility availability and programming was addressed by genergal manager of municipal services for the Town of Canmore Lorrie O’Brien.

At the beginning of the event she invited anybody interested in working together to address that issue to include the municipality.