“What our ratepayers have to understand is this comes as a direct cost to the MD – commercial or residential. It is a cost and an escalating cost.”
Jul 24, 2020 7:00 AM By: Jenna Dulewich 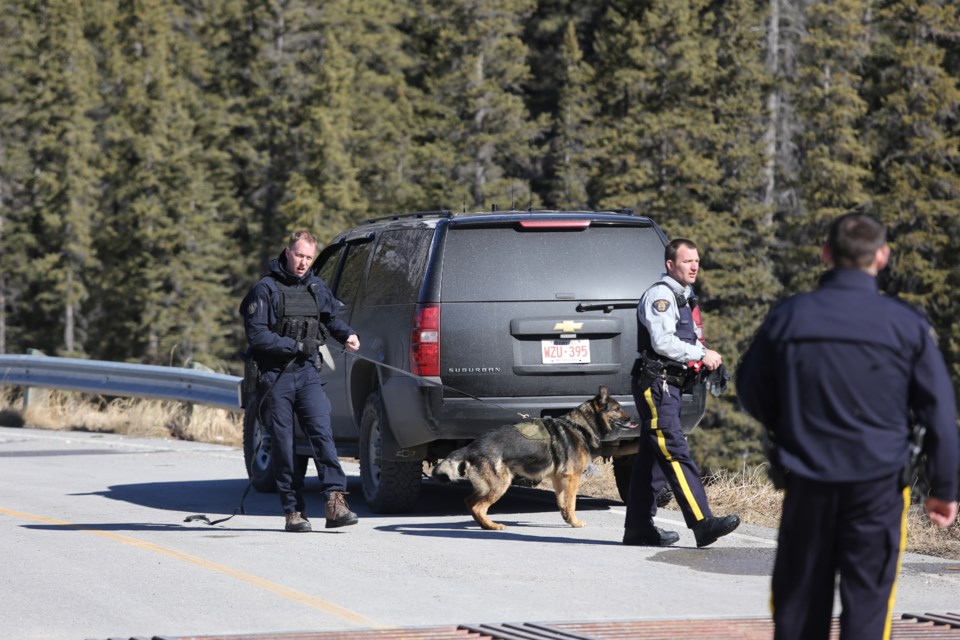 RCMP respond to an incident near Dead Man's Flats, which is in the MD of Bighorn. That municipality relies upon RCMP detachments in Canmore and Cochrane for police services and a new funding model introduced recently by the province means taxpayers in Bighorn will be expected to pay more for those services into the future. RMO FILE PHOTO

As the Canmore detachment gears up to gain a new officer, aiming to have boots on the ground this fall, MD of Bighorn officials said they are grateful for the new position, but want to remind taxpayers it comes at a cost.

“Certainly there is a need for increased policing presence in the Bow Valley and also in our rural landscapes … there have been ongoing concerns over the whole MD where crime requires more attention,” MD of Bighorn Reeve Dene Cooper said.

“But what our ratepayers have to understand is this comes as a direct cost to the MD – commercial or residential. It is a cost and an escalating cost.”

Last winter, the MD revealed there was uncertainty around the 2020 operational budget, as the UCP government’s announcement of increased police staffing numbers meant a change to the funding model.

Historically, communities with a population of under 5,000 did not have to contribute to policing costs in the province. But with the announcement of 300 new positions over the next three years, Bighorn which has a population of 1,334 according to the 2016 census, is now being asked to contribute 10 per cent in 2020, bumping up to 30 per cent by 2023.

“For a while, we had persistent crime, mostly in the areas of theft. We hope we can take certain kinds of crime and keep it from occurring in places,” Cooper said.

The new position is part of Alberta’s Policing Funding Model which includes 76 new police officers and 57 new civilian positions. Canmore has announced it will receive an additional officer, while the Cochrane detachment, who also patrols areas within the MD of Bighorn, announced three new officers earlier this month.

“Policing and public safety resourcing levels continue to be an issue for rural communities across Alberta. It is encouraging to see the RCMP partially investing the increased police cost contributions from rural municipalities into frontline resources in rural Alberta,” Al Kemmere, president of Rural Municipalities of Alberta said in a press release.

“RMA looks forward to working with the RCMP and government of Alberta to identify how rural municipalities can have greater input into determining where increased rural policing resources are distributed throughout the province, which will hopefully lead to improved rural service levels.”

Canmore's detachment commander said the new position, which is currently filled internally, is a dedicated rural position with the focus on the surrounding rural areas in the Bow Valley, which include the MD of Bighorn hamlets.

“The Canmore RCMP are very excited with the recent announcement by the provincial government,” Sgt. Ryan Singleton said.

“Some rural areas have been targeted with crime sprees and having additional members on the ground we will be able to focus more on proactive policing, proactive projects utilizing bait programs and patrolling our rural areas.”

“Rural policing has been an issue from the standpoint of law and order in rural and remote places … in the MD we don’t have any embedded towns or cities,” Cooper said.

With a low population centralized in the Bow Valley, Cooper said the additional costs to the operational budget will put an increase demand on taxes for the MD, but acknowledges the additional officers were requested.

The Reeve also noted the unique landscape police have to patrol within the MD, which includes road access from several municipalities and counties, lack of landlines and cellular service in some patches and the increase of visitors, sometimes more than tripling the population, on long weekends.

Cooper said there is the idea things will go back to “how it was before COVID-19” but notes that is an assumption.

“[We are] hoping the [new officers] will province safer rural communities where crime is dealt with quickly, not remotely or on delayed amounts of time,” Cooper said.

The new officer is expected to join the Canmore detachment this fall.