Sitting on a smooth wooden pew, as the voices of the church choir fill the sanctuary of the church with the hymn “Jesus Loves Me,” one cannot help but cast their imagination back 125 years to the very first service heard in the first church built in
0
Jan 27, 2016 12:00 AM By: Rocky Mountain Outlook 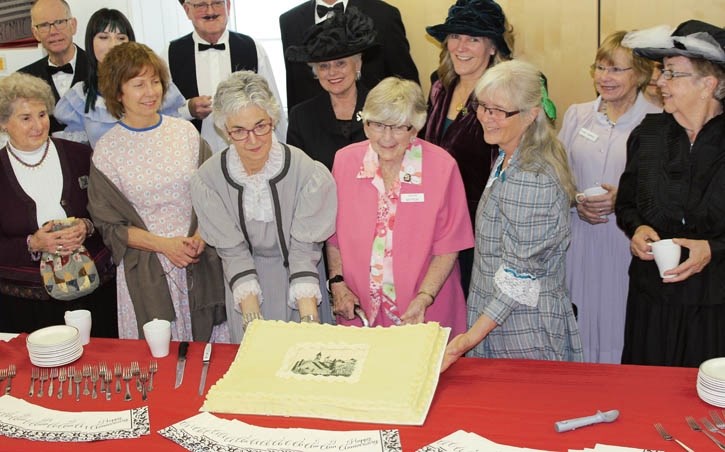 Sitting on a smooth wooden pew, as the voices of the church choir fill the sanctuary of the church with the hymn “Jesus Loves Me,” one cannot help but cast their imagination back 125 years to the very first service heard in the first church built in Canmore.

The pews may have been a great deal more rustic, the walls plaster covered and the congregation slightly rougher, but the core beliefs, the sense of community and fellowship that brings them together is the same.

Dr. Rev. Charles Gordon arrived in Canmore in 1890 when it was literally the Wild West, having been assigned as missionary for the Banff region for the Presbyterian Church. The community was rough, a burgeoning railway divisional point and coal-mining centre.

While only here for three years, in that time he established the Canmore Presbyterian Church and built the sanctuary which still stands today as the Ralph Connor Memorial United Church.

Charles Gordon and Ralph Connor are, in fact, the same person – the latter being the nom de plume for the dedicated Reverend Gordon, who used his time in Canmore as inspiration for some 30 novels that sold upwards of five million copies at the time.

The simple church of 1891 has seen additions and changes to it, says current Reverend Greg Wooley, with the hall, offices and narthex, or entrance area, added in the early ’80s, for example.

But the essence of the church, its place of worship and where generations of Canmore residents have come to pray, give praise and gratitude, seek spiritual direction and celebrate life in all ways – from marriages and funerals to baptisms – remains the same after all this time.

Wooley said as a sacred place, the sanctuary has a special energy – and being at the pulpit for the 125th anniversary was an incredibly special experience for him.

“I just really feel so honoured to be the minister who just so happened to be here when we hit a milestone like this,” he said. “Am I a lucky guy or what? I am privileged and blessed to be the person here while we celebrate this milestone, yet we realize that (it is a special place) all the time. People notice it, comment on it and feel it.

“The sanctuary has almost a personality of its own. There is something that just reminds you – and it is not something you can take for granted – that good things have happened here for a long time.”

For member of the congregation Louise Mattson, that is definitively true. At 92 years old, Mattson has seen the church progress through history first hand and was even baptized in the sanctuary in 1923. She was there on Sunday and marked the anniversary with the honour of cutting the cake as the community of the church gathered to celebrate the anniversary, many of whom wore period-style clothing.

Karen Fraser’s family has also spent multiple generations as members of the church. Her grandparents were married in the sanctuary in 1907, her parents in 1950 and Fraser and her husband Ian Schofield wed in 1977.

She helped Wooley select the hymns for the service from an original copy of the Presbyterian Book of Praise from 1880, which would likely have been the book used by Rev. Gordon in the beginning. Fraser and Wooley selected songs that were still being sung at services when she attended as a girl growing up.

“The church service was very emotional for me,” she said. “The service brought me back to my childhood. And as we sang the old hymns and said the old prayers, I thought about the former ministers and the old families of the church and, of course, my own family and I found it remarkable that despite all the changes in the life of Canmore the church still continues to have a wonderful congregation of very wonderful and active people who serve the community. I think that is nice to see.”

The celebration was also aided by the historical collection of documents compiled in 1991 for the centennial by congregation member Mary Smith. Wooley said Smith was able at that time to access archival material, reach out to former ministers and obtain many original documents. Those include the recollections of young Miss Minnie Fulton, who was a schoolteacher and arrived in Canmore when the church was brand new.

Her observations reveal a whole new definition to the term “Manmore,” said local historian Rob Alexander jokingly. It was a dirty and gritty place with the majority of the population being male, he said.

That’s not to say there were no women and children living in the community, but men, and for the most part, single men, would have been in the majority.

“For the most part all these men would have done is work, drink and fight,” Alexander said. “Some of the men went to church Sundays … but the majority of the miners, loggers and railway workers would not have had or taken advantage of those outlets.”

An early police report from the time, he added, talked about the “explosive rowdyism” of the miners of Canmore and Anthracite, another nearby coal mining town.

“Canmore must have been a rough town then,” Alexander said. “The churches, however, were cultural centres offering people a choice and a range of social activities, including book clubs.”

That was the context within which Rev. Gordon would have been establishing his church. Wooley said the minister was definitely a “temperance man,” and during his time in Canmore as leader of its first church, the congregation, and “were definitely uncompromising on their attitude toward alcohol

“It was a rough and tumble town when the church was just starting – they wanted to set a tone of what kind of town they wanted it to be.”

Wooley said he is thankful to have a congregation that continues to be vibrant members of the community, contributing to the church’s outreach, mission and service work. The church has stepped forward to sponsor Syrian refugees in the Bow Valley, as just one example.

With an occasion as big as the 125th anniversary, said Wooley, the celebration is not limited to the sermon on Sunday (Jan. 24). Many more events are planned throughout the year, including an Easter Hat Social, Kitchen Lobster Party and several concerts. Follow the church on Facebook to find out more details about the church and its events.