Parks Canada is concerned the number of harlequin ducks in Banff National Park is declining and as a result has embarked on a population estimate project this summer.
May 24, 2012 12:00 AM By: Rocky Mountain Outlook 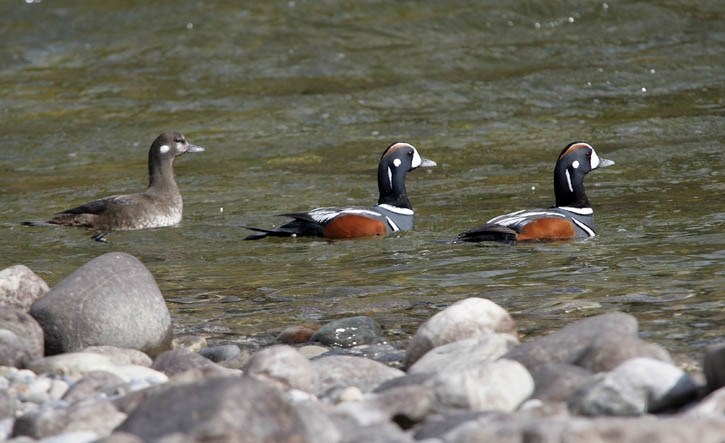 A pair of males and a female harlequin duck swim down the Bow River near Lake Louise.

Parks Canada is concerned the number of harlequin ducks in Banff National Park is declining and as a result has embarked on a population estimate project this summer.

But first, staff with the federal department had to catch the ducks in their habitat along the Bow River earlier this month.

To catch and band the ducks, staff and volunteers spent three days at various locations where the sea birds come inland during the spring and early summer months to nest.

Harlequins are the only North American duck to migrate inland and nest along turbulent mountain streams. They favour areas of low human disturbance where the waters are clear and clean.

Banff, Yoho and Kootenay National Parks aquatics specialist Shelley Humphries explained by banding as many ducks as they can it gives researchers more accurate information for a population estimate as part of a long-term monitoring program.

Banding, however, happens only every seven to 10 years as it requires extra effort and can be stressful for both drakes and hens. For several years after two different bands are applied, they are readable through a high-powered scope.

“This duck has been studied in Banff National Park since 1995 and we know that we have quite a large population – this is their breeding territory,” said Humphries. “We have been seeing declines on the Bow River that we have been monitoring.”

The bands allow researchers to distinguish individuals within a population and that data is used along with a mathematical formula to reach a population estimate that has more accuracy than merely going out and counting ducks.

Humphries said in that scenario you don’t know if you are seeing different individuals in the population or the same ducks multiple times.

Banding a duck is serious business along Morant’s Curve of the Bow Valley Parkway just beneath the CP Railway line.

Volunteers and Parks staff efforts ensure these iconic waterfowl are not harmed in the process and there is only one certified bander within the agency’s Alberta parks who is qualified.

Ecosystem scientist Cyndi Smith, with Waterton Lakes National Park, has that particular distinction and also has the practical background of setting up the mist net the birds are caught in.

Smith is responsible for placing a fine black net on a curve in the river where the ducks can’t see it and therefore fly into it.

Smith is also the only one to handle the birds and untangle them as she places them in bags individually wrapped in damp towels. She takes measurements, such as length of the body, wing and bill, then puts on the bands.

The ducks have two bands, one on each leg. One is a metallic band that is a North American standard, the other is a bright green coloured band that has an alpha numeric distinction that can be read from a distance with a scope and identifies the individual birds for the study.

Humphries said until June 14 staff will do resighting surveys from Lake Louise at the rapids to Castle Junction to count birds with and without bands.

“We will use a mathematical formula to establish a population estimate between marked and unmarked birds,” she said.

The population estimate from the last time Parks did this more intensive count was 87 ducks in 2006 with a 95 per cent confidence interval.

The years in between population counts, which are less accurate, have shown a decline in numbers, said Humphries, and this year’s efforts will help researchers understand that trend better.

Data collected will be provided to the Canadian Wildlife Service, which is responsible for migratory waterfowl and can better understand what is happening because it has integrated data across the population.

The harlequin has been provincially listed as a species of special concern. Humphries said they are sensitive to in-stream disturbances. That means their numbers in the park could continue to decline and scientists want to know why their numbers are down.

She said the birds could be shifting their nesting to a different part of the area or a different region on a larger Alberta/B.C. scale.

“If they are doing well on the coast and stable, then maybe we are seeing a redistribution of ducks in their breeding territory,” she said. “I am not sure if this is part of a larger problem or they are redistributing.”

But because of their sensitivity to disturbances in the water, particularly water quality, there could be other reasons they are not coming back to the Bow River.

Harlequin female ducks return to the stream where they were hatched as long as they live and bring a mate with them that they find on the coast.

The instinct to return to the area is strong enough to see the males continue coming back even after losing their mate.

Humphries said on the last day of banding they caught a male duck that was first captured in 2001 and again in 2006 with a banded female partner. This time around the roughly 13-year-old drake had a new hen.

“This is one of the older ducks we have captured enough times that we can tell a little bit about his story,” she said.

Of the 14 harlequins caught, there were six pairs and two individual males.

Humphries said everything went well and none were harmed.