BANFF – A wolf collared for research purposes in Banff National Park has fallen off a cliff and died.
Jul 3, 2018 2:12 PM By: Cathy Ellis 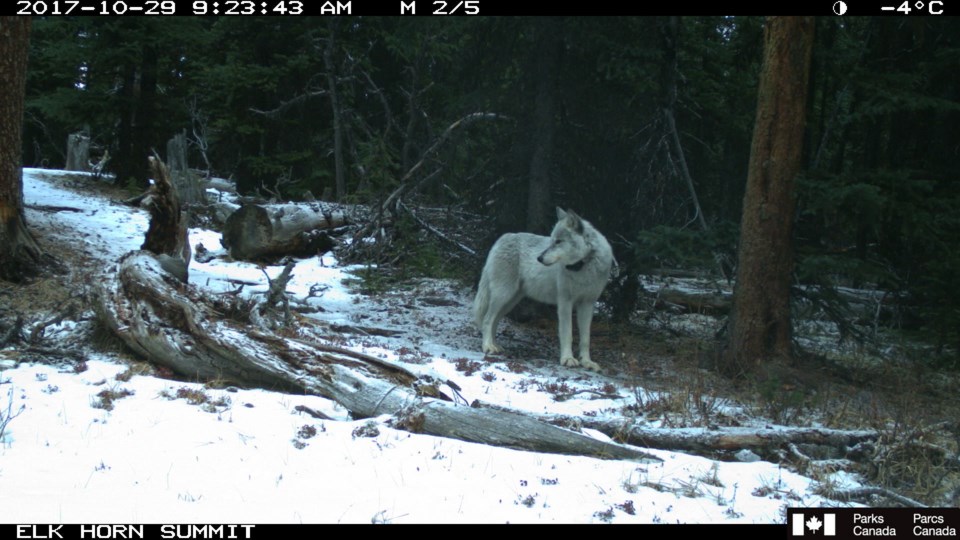 A female wolf from the Cascade-Panther pack, also known as #1503, was found dead in early June at the bottom of a cliff in the north fork of the Cascade River Valley.

BANFF – A wolf collared for research purposes in Banff National Park has fallen off a cliff and died.

The carcass of the female wolf from the Cascade-Panther pack was found in early June at the bottom of a cliff in the north fork of the Cascade River Valley at an elevation of 2,318 metres.

Jesse Whittington, an ecologist with Banff National Park, said the GPS collar indicated the wolf was stationary for more than 12 hours, but until they went to investigate, they didn’t know if the animal had dropped the collar or died.

“She was well above tree line and appeared to be travelling along some rock band and had a big fall and tumbled and died. She had broken legs, broken ribs, a broken jaw, so she took a big fall,” he said.

“This wolf is a good reminder that when wolves and other animals die from getting hit by vehicles or trains or other sources of human-caused mortality, it can occur in addition to natural mortality these populations already face.”

It’s not known if the wolf was travelling alone or with the rest of the pack. There is another wolf in the Cascade-Panther pack that is also fitted with GPS collar that’s still active.

“The two have not been travelling a lot together in summer, but that’s pretty typical of wolves,” said Whittington.

Whittington said it’s impossible to know if the wolf was just passing through the area, but there is a possibility she was hunting mountain goats at such high elevation.

“Certainly the north fork is one of the hot spots for goats and people see 40 goats up on those passes,” he said.

Having GPS collars on two of the wolves in each of the park’s packs allows researchers to monitor what wolves are eating. Researchers visit areas where there are clusters of GPS locations where the wolves spend at least eight hours at a site.

Wolves can consume smaller prey species like a young deer in less than a day, but will spend several days feeding on elk and moose.

About 75 per cent of the species hunted and killed by the Panther-Cascade wolf pack in summer 2016 were bighorn sheep, but the pack switched it’s diet the following year to about 75 per cent deer.

Wolves in the Bow Valley rarely hunt goats locally, though they have on Castle Mountain, but he said they prey on goats when they travel further afield towards Bow Summit.

“Until we started putting GPS on wolves we had no idea they hunted mountain goats,” said Whittington, noting the diet of the park’s wolf packs varies a lot regionally and year to year.

“Most times they’re catching them down at mineral licks or alpine basins where they’re far from escape terrain, but certainly for the Red Deer pack, mountain goats are an important part of their diet.”