Bow Valley venues, events and programs have been affected by the COVID-19 coronavirus pandemic – this is a list of closures and event cancellations that will be updated regularly
0
Mar 13, 2020 11:25 AM By: RMO Staff 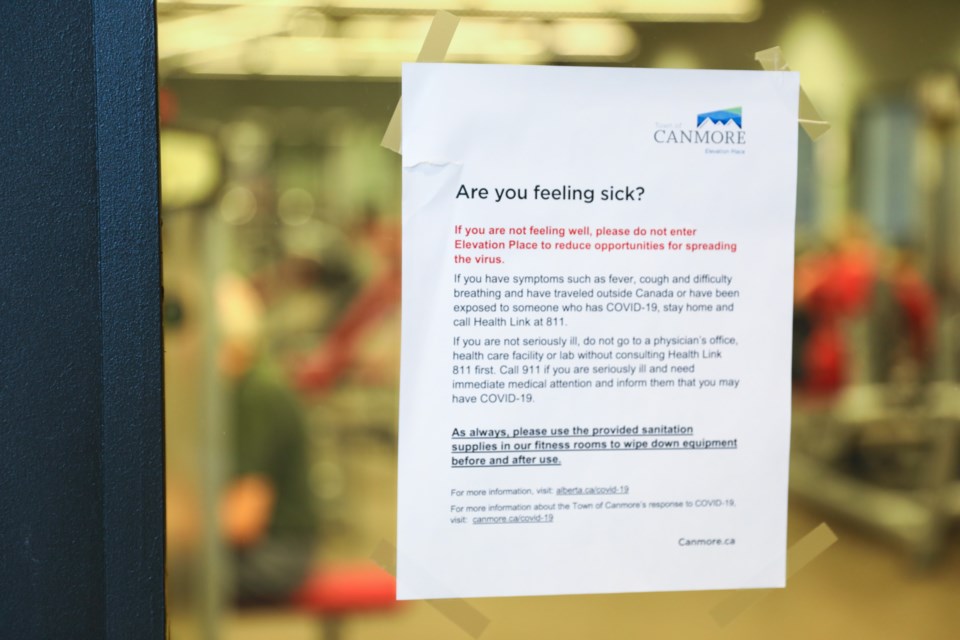 A sign at Elevation Place asks patrons who feel sick not to enter the recreaction facility in response to the novel coronavirus on Friday (March 13). EVAN BUHLER RMO PHOTO⁠

As COVID-19 continues to impact events, businesses and health and safety practices in the region, RMOtoday.com will provide updates on local event cancellations, postponements and changes in practices.

Officials said guests can arrive at St. Michael’s Hall between 5-7 p.m. to pickup food to go. Anyone using the service will be asked to use hand sanitizer upon arrival and will receive food in takeout containers.

• Canmore's artsPlace announced it will cancel all upcoming theatre events until March 23, effective immediately. However at this time, workshops and arts programs are running as scheduled.

"We will continue to closely monitor the development of COVID-19 and follow recommendations from health officials in the coming days and weeks," wrote executive director Jeremy Elbourne on a social media post.

"We will continue to keep you up to date with any related changes that may affect you. The safety and health of our staff, patrons and customers continues to be our first priority."

• The Alberta Climbing Competition hosted at Elevation Place has been cancelled for the scheduled March 14-15 dates.

"In cooperation with the Alberta Climbing Association, the Town of Canmore has decided to cancel the planned climbing competition scheduled for March 14 and 15 in light of our response to COVID-19," stated a Town of Canmore post on social media.

• A town hall hosted by Bow Valley doctors on how health care cuts would effect the community on Sunday (March 15) has been changed to an online event only. The Facebook livestream of the event will begin at 4 p.m.

• The Dance for Guide Dogs organized for Friday (March 13) at the Canmore Golf and Curling Club has been postponed.

• The Alberta World Cup Cross Country 2020 races at the Canmore Nordic Centre March 19-22 have been cancelled.

• The Canmore Young Adult Network has cancelled all its events in March. A free weekly yoga class will be offered online.

• St. Michael's Anglican Church in Canmore and St. George's in the Pines in Banff have cancelled all services until March 31.

• The Canmore Public Library announced Monday (March 16) it will be closed until further notice.

• The Banff Centre for Arts and Creativity has announced cancellation all events open to the public on its campus until further notice.

According to a statement from the Banff Centre, the public can check back mid-April for updates for the summer season.

"We have implemented elevated cleaning and hygiene protocols on campus in all public spaces and are ready to respond should the level of risk escalate," stated the website.

"The Sally Borden fitness facility will close one hour earlier each day to facilitate thorough, daily cleaning of the equipment."

• The YWCA Banff's Vineart fundraiser scheduled for Saturday night (March 14) at the Fairmont Banff Springs Hotel has been cancelled.

"At this moment, our highest priority is the health and well-being of our guests, sponsors, volunteers and staff from both the YWCA and Fairmont. Following increased concerns about the COVID-19 virus, we felt this was the best way to proceed during such an unprecedented global situation," read a statement on the YWCA's website.

• The men's bonspiel organized by the Banff Curling Club March 13-15 has been cancelled.

• The Whyte Museum of the Canadian Rockies has cancelled all programs and events and announced the museum, archives and reference room will be closed until April 1.