As of Tuesday (July 21) afternoon, the Bow Valley had 14 positive active cases confirmed with eight in Banff, six in the overall Canmore geographical area, which includes two cases in the MD of Bighorn and one in the town of Canmore
Jul 21, 2020 5:58 PM By: Jenna Dulewich 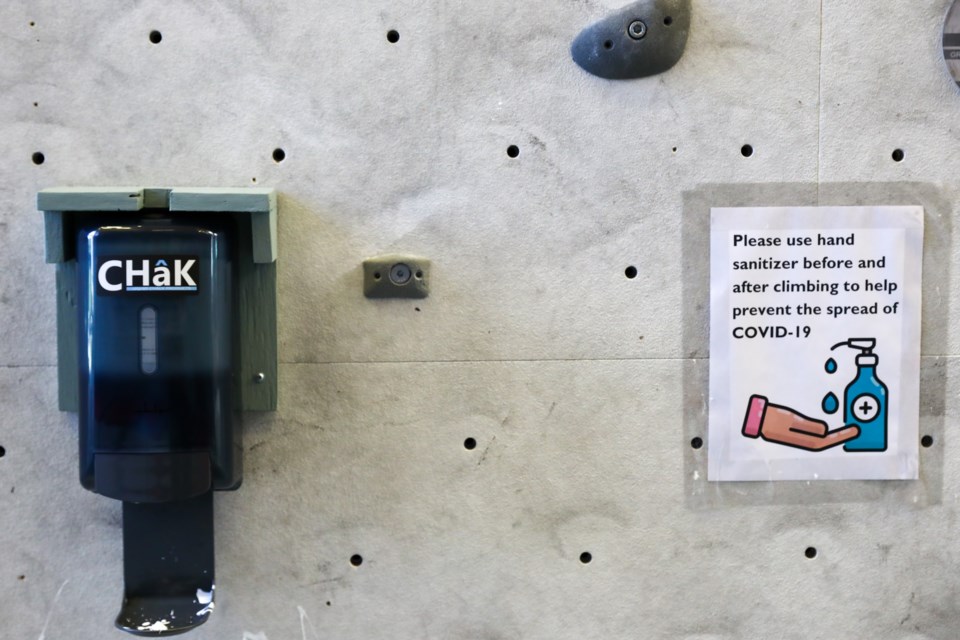 Signs prompt guests to use hand sanitizer at the Elevation Place climbing gym, as the facility reopened to the public on Monday (July 20). The climbing gym and fitness areas were reopened at a reduced capacity and by appointment only. EVAN BUHLER RMO PHOTO⁠

BOW VALLEY – As active COVID-19 case numbers rise, Alberta officials admit they are “concerned” with the increase in numbers.

“I am concerned with the recent rise in numbers … I plead [with Albertans] not to give up on the progress we have made,” Alberta Premier Jason Kenny said during a press conference on Tuesday (July 21) afternoon.

The messaging comes more than a month after the province entered the second stage of its Economic Relaunch Strategy, which allowed more businesses and services to reopen with continued physical distancing requirements and other public health guidelines in place in mid-June.

In addition to the hair salons, restaurants, cafés, museums and daycares that reopened at 50 per cent capacity during stage one, stage two allowed libraries, community halls, movie theatres, gyms and casinos to reopen while also increasing public gatherings to 50 maximum indoors and 100 maximum outdoors, unless for an audience-type of community event where the maximum allowed was 200 people.

As of Tuesday (July 21) afternoon, the local geographical area of Banff had eight active positive COVID-19 cases and the Canmore geographical area had six active cases. That included two cases in the MD of Bighorn and one in the town of Canmore, making the total for the valley to 14. Across the province, there are 93 people currently hospitalized with 16 in ICU. To date, 172 Albertans have died.

“I am concerned by the continued rise in active cases … it is possible new cases could spike in a very rapid way,” Alberta Chief Medical Officer of Health Dr. Deena Hinshaw said during the Tuesday press conference.

While businesses and services have reopened, several health guidelines remain in place, including physical distancing, keeping two-metres apart from people outside your household or cohort family, and the legal requirement to isolate for 14 days after entering Alberta from outside of Canada or if the person came into close contact with someone who tested positive for COVID-19. Albertans are also legally required to self-isolate for 10 days if they have any symptoms not related to a pre-existing condition such as cough, fever, shortness of breath, runny nose or sore throat.

Hinshaw said the province is watching the reactions of other jurisdictions to the increasing cases and said Alberta wants to make messaging very clear – officials are concerned and if Albertans do not all work together, the numbers will continue to rise.

“Let me be blunt, if you think you can socialize with people in close quarters – knock it off,” Kenney said.

“We are going back to the basics – stay home if you are sick, social distance and wear a mask [if you can].”

Officials heard from Albertans months ago saying they did not need restrictions to make the right choice, Hinshaw said, noting now is the time to prove that.

“All is not lost. We have an opportunity together,” she said.

CORRECTION: A prior version of this story incorrectly reported the total active case numbers by counting two cases from the MD of Bighorn twice.