The story of Peter and Catharine Whyte is the quintessential Banff story and an integral part of the community’s fabric and legacy.
Nov 17, 2011 12:00 AM By: Rocky Mountain Outlook 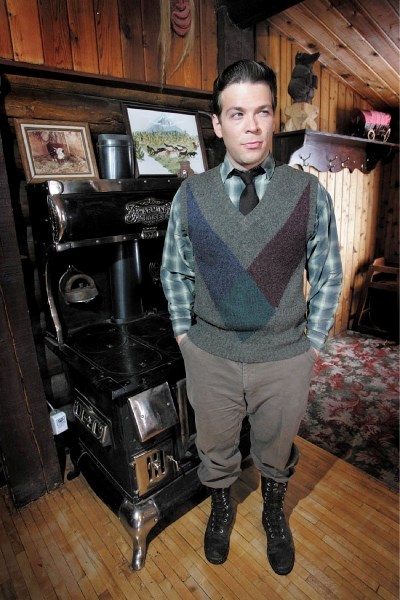 The story of Peter and Catharine Whyte is the quintessential Banff story and an integral part of the community’s fabric and legacy.

And when it comes to Drawing Home, a feature-length film about Peter and Catharine that is currently in production in the Banff-Bow Valley region, who better to play Peter, who was born in Banff in 1905 into the prominent Whyte family, than Banff-born actor Juan Riedinger?

It’s a perfect match that has Riedinger, who has appeared in numerous TV programs and movies including Smallville, Aliens vs. Predator: Requiem and Jennifer’s Body, pinching himself to make sure it is real.

“It’s an absolute dream, it hasn’t really sunk in yet,” he said on Tuesday (Nov. 15) during a break in filming at Rafter Six Ranch. “I’m very proud to do it and it’s a tremendous opp. to give back to my community, where I grew up, through my art and what I’ve chosen as a career.”

Like any kid growing up in Banff, Riedinger learned about the Whytes through annual school trips to the Whyte Museum of the Canadian Rockies, but has since come to develop a deeper understanding of Peter and his relationship with Catharine Robb.

But perhaps more importantly, their shared upbringing is allowing Riedinger to connect with Peter in a manner that another actor from a different background might not be able to.

“We grew up in the same town with the same mountains surrounding us and even the fact that we are both artists from the Rocky Mountains is a parallel that I can connect to. And its really spooky, I’ve looked at old photographs and I think there’s a bit of a likeness there,” he said. “He tended to be a bit awkward in social settings. He didn’t like to dress up and go to fancy events; I can relate to that. That comes from growing up in the small town. That is part of the appeal and if anything, in the character of Peter Whyte there are parallels that exist.”

And given their shared history and passions, it’s not a stretch to say that Riedinger, who now lives in Vancouver, was destined to play this role.

He went through the audition after his agent notified him about the project, which is being produced by New York-based M.Y.R.A. (Movement Youth. Resources. Art.) Entertainment. It all fell into place.

“Immediately my ears perked up and when I saw it was Banff and then the story of Peter and Catharine, I couldn’t believe it, I was determined to get the role,” he said.

He sent off his audition tape and shortly afterwards, M.Y.R.A. Entertainment flew him to Calgary to meet with the director and producers and to audition alongside actresses hoping to get the role of Catharine.

After doing a scene with Julie-Lynn Mortensen of Calgary, who is playing Catharine Robb Whyte, the pair was offered the role.

“We had done the scene a number of times and (director Markus Rupprecht) said to us, ‘we forgot to ask you both about playing Peter and Catharine’ and our jaws just dropped. In that moment we had the parts and then it was quite the journey from there.

“The further along I’ve gotten in the process there was no way I couldn’t. I had to. It’s been a life changing and career changing event for me.”

But Riedinger wouldn’t have been in this role if Drawing Home producer Margarethe Baillou hadn’t been in Banff on a road trip in 2007. On her last day in town, she caught an exhibit about Peter and Catharine at the Whyte Museum in its last week.

Baillou had an hour before the museum closed, but in that time, she knew she had stumbled upon something remarkable.

“When I found out about them, I just knew it was a fantastic story that needed to be told,” she said. “I felt like I knew Peter and Catharine and I was really excited. It was like meeting a person who you can’t wait to introduce to your family.”

Less than a year later, Baillou, working with the Peter and Catharine Whyte Foundation, had secured the necessary rights and permissions to the story and to film in the Whyte’s Banff home, located on the museum grounds.

Not only was Baillou surprised to discover the Whyte’s story, she was even more surprised to find very little of the story had been told outside of Banff. The exceptions were Kim Mayberry’s 2003 book Romance in the Rockies: The Life and Adventures of Catharine and Peter Whyte and a limited-run book by Jon Whyte featuring a collection of letters from the Whytes.

“This is the first time for really grabbing that story and telling it to the world. It is flabbergasting no one has told it before and at the same time I always compare it to the overall Canadian mentality, which tends to be very, very humble

“There are so many great people and stories; it is a treasure trove, this country. I don’t know, it’s telling to be the modest sibling of a southern neighbour always in the spotlight,” she said. “I enjoy this process of really pushing Canada and Canadian heritage into the foreground with Canadian talent.”

And it was through the foundation and the Whyte Museum that Riedinger and Mortensen learned about Peter and Catharine. They read their letters, studied photographs and listened to a few voice recordings in hoping to learn their mannerisms and habits.

“To actually hear the man’s voice, which sent chills down my spine, definitely informed what I’m doing with the character,” Riedinger said, adding photographs of Peter were a great help.

“I get the sense he was camera shy, he never liked to look at the camera, which I’m incorporating as the idea that he is low key and doesn’t like the spotlight.”

Drawing Home, part of which was filmed earlier in October, will continue filming through November before taking a break until late spring/early summer to catch all four seasons.

Through it all, the story of Peter and Catharine is a quiet one and Drawing Home, scheduled to be released in 2013, Baillou said, will share that quality, while at the same time bringing forward the essential qualities of the Whytes: passion, generosity and modesty.

Attributes, she said, that are good ingredients for anyone’s life.

“It’s a terrific story and I think something that Canadians can be extremely proud of,” Baillou said.