The sinkhole caused by an old mine shaft in Three Sisters Mountain Village has been a source of concern for nearby residents, the community at large and the municipality for six years as of this month.
May 26, 2016 12:00 AM By: Rocky Mountain Outlook 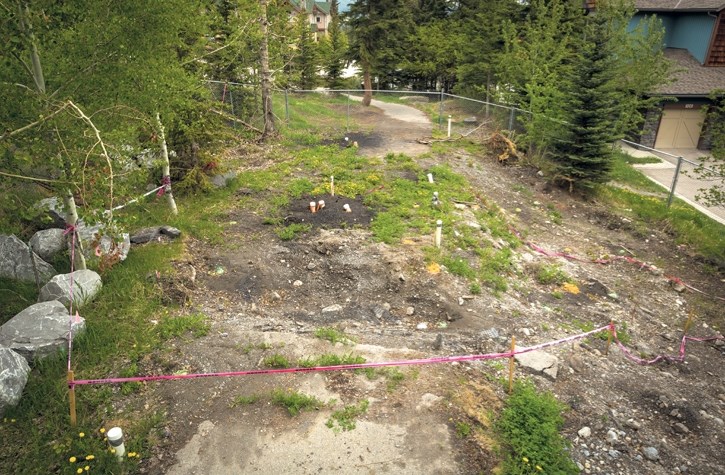 The sinkhole at Dyrgas Gate in Canmore.

The sinkhole caused by an old mine shaft in Three Sisters Mountain Village has been a source of concern for nearby residents, the community at large and the municipality for six years as of this month.

The hole opened up in May 2010 on a pathway adjacent to Dyrgas Gate in the TSMV subdivision – it is at the location of an airshaft known as B14 that was dug to access the No. 4 coal seam of the No. 4 mine in 1938.

While TSMV was built in an area with significant undermining issues from the coalmines, work was done to identify and mitigate the old workings. In all, 300 specific underminings were identified and mitigated prior to development, including the 56-metre deep B14 shaft.

Because the exact location of the shaft was unknown at the time of subdivision, the area it was known to be in generally was zoned as municipal reserve and the Town of Canmore transferred title. Knowing development of buildings should not be located in that area, it was instead developed as part of the pathway system throughout the neighbourhood.

A year ago, municipal consultants were on site to drill and try and locate the mine shaft in order to propose a solution to fix it and the nearby pathway was closed off to public access as a result.

“We did initial geotechnical investigation (last year) and that helped us determine the location of the air shaft that had not been located before,” said the Town of Canmore’s manager of engineering Andy Esarte. “Using technology from the surface, you can define the changes in density in the ground and through that we were able to say where we thought the top of the airshaft was.”

As to why it took five years to mobilize on the site with engineers and geotechnical specialists – it was a matter of funding and who should be financially responsible for fixing the sinkhole.

The history of the sinkhole issue dates even further back in time than just where and when it formed and how – it relates directly to an amendment to the Municipal Government Act in the 1990s. Before TSMV moved forward as an overall development, the provincial government accepted undermining liability for development on those lands. It was something the municipality was not willing to accept, so through a regulation in the MGA (municipal government act) the province took legal responsibility for the possibility that an old mine working could cause damage in the future.

When the Dyrgas Gate sinkhole formed in 2010, the municipality went to the provincial government for the support it assumed would be forthcoming given the undermining regulation in the MGA.

However, the province denied responsibility for the problem, saying instead that the undermining regulation and liability it accepted for development in Three Sisters applies only to private land – not municipal property like the municipal reserve and pathway.

It has since been a political issue for Mayor John Borrowman, who has been lobbying the province to amend the regulations to make it clear who is legally and financially responsible for undermining issues.

“From our perspective they are not meeting their intended purpose. which is to protect the Town and its residents from risk and liability associated with the hazards of undermining,” wrote Chief Administrative Officer Lisa de Soto in a council update.

“We have recently had a brief discussion with Minister Ceci on this issue as the Alberta Treasury Board is a party to the Indemnity Agreement authorized by the Exemption from Liability Regulation. The current owner of the Three Sisters Lands also has concerns with the lack of clarity on the indemnity issue and has also requested to meet with Minister Ceci on this matter. We have requested a meeting with the legislation review group to discuss our submission and concerns in greater detail.”

While political negotiations were ongoing, the provincial government agreed several years ago to fund the project to the tune of $600,000. That grant funding allowed the municipality to mobilize on site with consultants to find the location of the shaft and propose solutions.

Esarte said all permanent solutions proposed after the location of the shaft was found came in over budget, except one. That one was pursued, but, once they got into the ground, specialists discovered the opening of the mine shaft was much larger than they anticipated and the solution pursued would no longer work.

“They started drilling and after three days of drilling the contractor made the call that their approach would not work because the opening was found to be larger than we anticipated,” Esarte said.

Once again, Esarte said specialists in September were on site drilling to get a better definition of the opening of the mineshaft so solutions could be considered. Two solutions came out of that work and both are considerably more expensive than the $600,000 budget for the project.

Esarte said the municipality has submitted the new information to the provincial government to amend the grant to cover the work that still needs to be done to fill in the sinkhole six years after it formed. He said there are complex challenges to remediating the undermining issue that formed the sinkhole, and thus the solutions are also complex.

“We learned from this,” he said. “Although technically tough and in limbo for a while, this is the first real test of the (undermining) regulations (in the MGA) and through it we have learned that there are things that need to be considered differently.”