For the past five Christmases, elves have been running around the Bow Valley committing good deeds for seniors.
Dec 8, 2016 12:00 AM By: Rocky Mountain Outlook 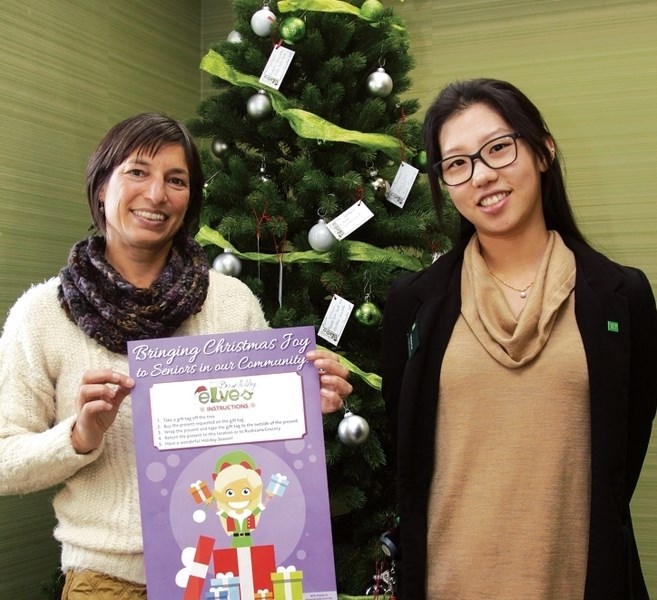 For the past five Christmases, elves have been running around the Bow Valley committing good deeds for seniors.

Bow Valley Elves, a local organization dedicated to spreading Christmas cheer, allows people to pick up tags at numerous locations in Canmore and Banff, each corresponding to a senior resident living in the Bow Valley. These people then purchase or create gifts to lighten up an elder’s holiday.

Tags can be found at Rusticana Grocery and TD/Canada Trust in Canmore, along with Banff Credit Union.

Canmore Collegiate High School has its own tree, where students can pick up tags and volunteer to deliver them to extended care at the Canmore hospital, Bow River Lodge and home, Cascade House, Mount Edith House, and individual Exshaw homes where the seniors are located.

The deadlines to return gifts under the trees are from Dec. 15-23, depending on where the presents are going.

Christine DeSoto, owner of Rusticana Grocery and founder of the program, got the idea from her sister who has a similar program in Burlington, Ont. Starting off by herself, DeSoto ended up joining forces with the Bow Valley Christmas Spirit Campaign to reach out to more people.

In past years, 20 to 25 students at CCHS helped deliver the gifts, however, the entire student body gets involved by buying gifts and leaving them under the tree for the elves to distribute.

Banff High School also gets involved by picking up tags and coordinating gifts with students.

The project gets underway in fall, when Jos Ogawa begins the process of finding out from seniors in the local facilities what small gift they would cherish.

For many students, this has been a life changing and eye-opening experience. Many of the seniors’ families live far away and can’t spend the holiday season as a family, so the interactions between them and the high school students is crucial.

After initially only working with Bow River Lodge, the Bow Valley Elves hope to extend the program into Morley next year to reach out to Stoney Elders.

“It’s a way of giving back to the people who have already contributed so much in their lives,” said DeSoto. “Hopefully, this will be another life changing Christmas.”