The installation of a second cemetery plaque is a fitting acknowledgment to Exshaw’s pioneers, said the MD of Bighorn’s Heritage Resource Committee chair (HRC).
Dec 9, 2015 12:00 AM By: Rocky Mountain Outlook 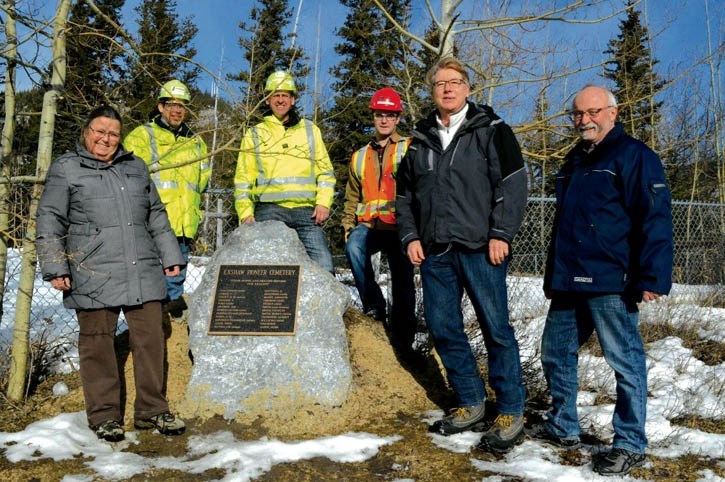 The installation of a second cemetery plaque is a fitting acknowledgment to Exshaw’s pioneers, said the MD of Bighorn’s Heritage Resource Committee chair (HRC).

A bronzed marker with updated names of those buried in the Exshaw Pioneer Cemetery was unveiled on Monday (Dec. 7) in front of a small group in remembrance of the hamlet’s hidden history.

The mountainside cemetery is on Crown land in an unused parcel of the Lafarge quarry and is closed to the public for safety reasons.

Approximately 70 were buried in its grounds from 1906 to 1925 (two after it officially closed) with 55 identified with the final resting place.

“It’s rewarding and a good feeling to know that these people are remembered because they are the pioneers of Exshaw,” said Lynda Grischkat, HCC chair.

“It’s important to remember people throughout the valley.”

The plaque was installed on Oct. 27 by Lafarge. Its total creation cost was under $3,000. In recent years Lafarge has acted as stewards of the cemetery.

The idea to have it installed surfaced last year after a growing interest among the community resulted in a visit to the restricted cemetery.

The first plaque next to the elevated cemetery was installed over three decades ago with the names of the people known to be in it. Grischkat noticed during the tour the list of names identified had grown since.

Many names were discovered through research over the years, including in the 2005 book of Exshaw’s history, Exshaw: Heart of the Valley, by Rob Alexander and Reeve Dene Cooper.

“We got quite updated when Dene and Rob Alexander did their book … The Alberta Archives even had a couple of names that we didn’t have so we’ve just been sort of adding to the list,” said Grischkat.

Twenty-four names, including one marked as ‘Unknown’ were added along the borders on the snow-covered cemetery. Only two grave markers display a name, as writing on the wooden markers was lost to sight due to age and the elements.

Some names on the plaque are recognized in the valley to this day; some were children who died of the Spanish flu, and some names will never have stories.

Their record, though, is now kept in one of Exshaw’s oldest parcels of history.

On the east side of the sloping cemetery there are numerous unmarked graves of Chinese workers from 1905 and later. Their identities and burial dates are unrecorded.

The cemetery closed down after 1925 because there was a suitable cemetery down the road in Canmore.