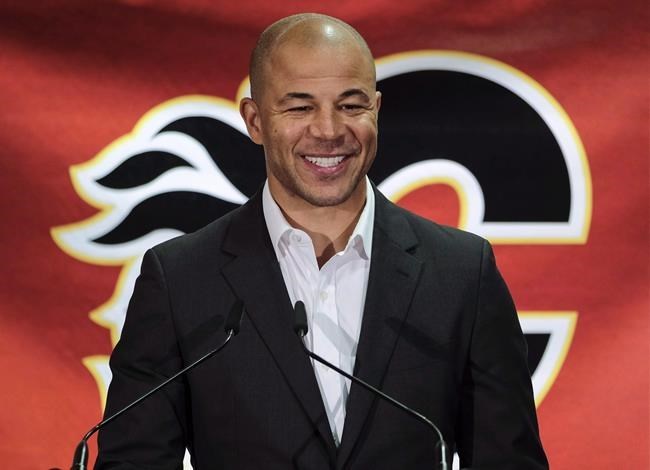 Former Calgary Flames captain Jarome Iginla announces his retirement from the NHL, after playing 20 seasons, at a news conference in Calgary on Monday, July 30, 2018. The Calgary Flames icon and former captain was in his first year of eligibility following a standout career that spanned from 1996 through 2017. THE CANADIAN PRESS/Jeff McIntosh

TORONTO — Jarome Iginla will headline the Hockey Hall of Fame's class of 2020.

The Calgary Flames icon and former captain was in his first year of eligibility following a standout career that spanned from 1996 through 2017.

Three-time Stanley Cup champion Marian Hossa will join Iginla in the players' category along with a pair of defencemen who have waited a long time to hear their names called — Kevin Lowe and Doug Wilson — and Canadian women's national team goalie Kim St-Pierre.

Ken Holland, meanwhile, will go into the hall as a builder, rounding out the 2020 class unveiled Wednesday in Toronto following a vote by the hall's 18-member selection committee.

Iginla, who also helped Canada win gold at the 2002 and 2010 Olympics, will be the fourth Black person enshrined in the hall, but just the second recognized for on-ice accomplishments in the NHL.

He will join former Edmonton Oilers goalie Grant Fuhr, Angela James of the Canadian women's national team, and Willie O'Ree — the league's first Black player — who was inducted as a builder in 2018.

"It's a huge, amazing honour," Iginla said on a conference call after the announcement.

Iginla registered 525 goals and 1,095 points in 1,219 games from 1996 through 2013 with Calgary before stops with the Pittsburgh Penguins, Boston Bruins, Colorado Avalanche and Los Angeles Kings. The 42-year-old Edmonton native finished his career with 1,300 points in 1,554 regular-season contests to go along with 37 goals and 31 assists in 81 playoff outings.

Iginla set up on one of the most famous goals in Canadian hockey history, assisting on Sidney Crosby's "golden goal" in the country's overtime victory against the United States at the 2010 Games in Vancouver.

The winger put up solid numbers despite playing a large portion of his career during the so-called "dead puck" era when defensive play reigned before the NHL instituted a number of rule changes following the 2004-05 lockout.

Iginla won the Art Ross Trophy as the league's leading scorer in 2001-02, and grabbed the Rocket Richard Trophy with the most goals that season and again in 2003-04.

Selected 11th overall at the 1995 NHL draft by the Dallas Stars before being dealt to the Flames as part of the Joe Nieuwendyk trade, Iginla willed Calgary to Game 7 of the 2004 Stanley Cup final before falling to the Tampa Bay Lightning, but never again got close to hockey's ultimate prize.

Hossa, meanwhile, will become the second NHL player enshrined despite still being on an NHL payroll, following Chirs Pronger in 2015.

The 41-year-old, who hasn't suited up for a game since 2017 and isn't expected to resume his career because of a serious skin condition, wound up with 525 goals and 1,134 points in 1,309 regular season games with the Ottawa Senators, Atlanta Thrashers, Penguins, Detroit Red Wings and Chicago Blackhawks.

"This is an amazing day for me and my family," Hossa said. "I never thought I was going to have an amazing career. My dream came true when I won my first Stanley Cup."

The Slovak winger was placed on long-term injured reserve by Chicago in October 2017 and subsequently traded to the Arizona Coyotes in July 2018 in a salary-cap move. Hossa will remain on Arizona's books through the end of the 2020-21 season.

The Hockey Hall of Fame's selection committee largely met for the first time via an online forum because of the COVID-19 pandemic. Members residing in the Toronto area gathered in a boardroom, but the rest joined using a video link to debate and vote on this year's candidates.

The 2020 induction ceremony is scheduled for November in Toronto, but that could change if the 2020-21 NHL season is delayed by the league trying to get the current campaign completed this summer and fall.

Drafted by the Oilers 21st overall in 1979, Lowe won five Cups in his 13 seasons with Edmonton. The native of Lachute, Que., then won another title with the New York Rangers in 1994.

Set to become the eighth woman — and first female goaltender — inducted into the hall, St-Pierre played boys' hockey until she was 18 before joining the women's team at McGill University. The Chateauguay, Que., native would go onto play in the CWHL and represent Canada on the international stage, helping her country capture three Olympic gold medals and five world championships.

"What an honour," St-Pierre said. "For me, it's a huge day ... to be the eighth woman to be inducted into the Hockey Hall of Fame is very special."

Wilson was the seventh overall selection by Chicago in 1977, and would play 14 seasons with the Blackhawks. Traded to the San Jose Sharks in 1991, the Ottawa native played his final two seasons on the West Coast before later moving to the team's front office, where he's served as GM since 2003. In 1,024 NHL regular season games, Wilson recorded 237 goals and 827 points.

After his playing career, Holland served as a scout with Detroit. From there he moved up to assistant GM. Named the Red Wings' GM in 1997 he then spent 22 seasons in the post, winning three Cups. During his tenure in Detroit his team won more combined regular-season and playoff games (1,044) than any other NHL franchise.

Holland was hired as GM of the Oilers last May.

This report by The Canadian Press was first published June 24, 2020.