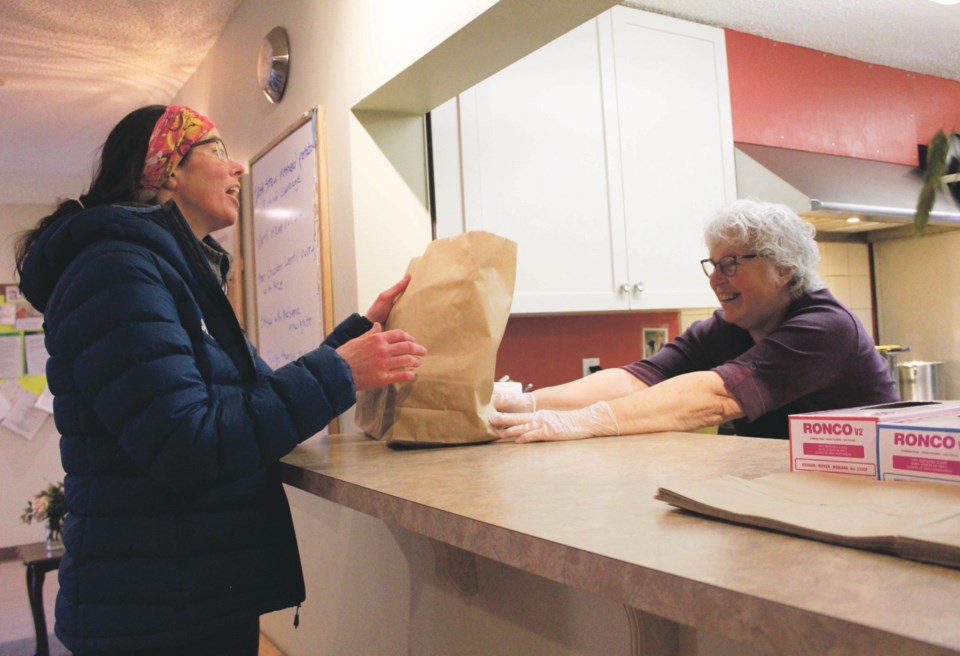 BOW VALLEY – Canmore Food and Friends is expanding to twice a week.

The weekly community meal program, organized and run by volunteers since 2013, is now expanding to making dinners twice a week after a $64,000 donation from the provincial government.

“I think it is incredible that we are in this position – obviously there is a need for this – we are very fortunate to receive a grant to make this possible,” said Pat Grayling, longtime volunteer and organizer with Canmore Food and Friends.

The announcement comes as the province entered its 11th week into the COVID-19 pandemic with only one active case recorded in the Bow Valley and 21 recovered cases, as of Tuesday (May 26).

Typically volunteers serve about 300 meals a week with soup, salad, a main course, bread, veggies and dessert offerings at the St. Michael Anglican Church in Canmore on Monday evenings. But since the pandemic swept the province, operations moved from a breaking-bread and sit down style, to a contactless delivery, with the number of meals increasing to about 425 a week.

“It is so needed in this community," Carol Picard, Food and Friends volunteer and organizer said.

"I know some people look at this town and think everyone is [affluent], but there are serious pockets of need.”

Speaking to the food security issues in the Bow Valley, Picard said the weekly meals were created to help those in need while also promoting community.

As a community that relies heavily on tourism, after the government announced non-essential business shutdowns in mid-March as a way to keep positive case numbers low and not overwhelm hospitals, the Bow Valley was hit hard as Banff’s unemployment rate reached 85 per cent and Canmore’s was estimated to be between 50 to 65 per cent.

Picard said she has been watching community members go months without work, some even leaving the valley to move back to hometowns or provinces.

“We are in a really strange window of time that I don’t think anyone has seen before,” she said.

But now with the grant, volunteers are hopeful the twice a week free meals, which will launch on June 4, provides some financial relief for those who need it.

“Bear with us … this might be a bit bumpity in its earliest weeks as the logistics of separate sets of drivers and needs unroll, but we are planning to launch next week with our first Thursday drop on June 4,” organizers wrote in a social media post.

The funding was made available through the provincial government as part of the $30 million funding announced earlier this year to assist with civil societies with increased demand for services during COVID-19. More than $200,000 was given to Bow Valley groups, including Canmore Food and Friends, Banff Food Rescue, Canmore Meals on Wheels, Spirit North and Stoney Health Services.

“I am normally a strong proponent of fiscal restraint as we work to bring our province back to balance, but during this uncertain period of vast unemployment and heightened demand for food security and other supports, our government needs to help those who are struggling,” Banff-Kananaskis MLA Miranda Rosin said in an emailed statement.

“These charities and not-for-profits are better situated to serve our local communities than any government in Edmonton or Ottawa ever could. I am so grateful for all these organizations are doing for our communities, and am happy that they will now be able to expand their operations with the financial help from our government.”

Rosin said she can guarantee residents all know someone who has been positively impacted by one of the groups in town.

"That is testament to the great work they do," she said.

In addition to the $64,000 given to the Canmore Food and Friends community dinners, the Alberta government also granted:

Updated: Alberta mandating masks for students and staff when schools reopen in September
Aug 4, 2020 9:46 AM

Bighorn council approves re-zoning for the Crossing at Ghost River
Aug 4, 2020 9:35 AM