Wildlife experts say three hungry black bears relocated from Canmore last week have had their survival odds slashed in half, and the animals’ removal has re-opened the longstanding debate on fruit bearing trees within town limits.
Aug 26, 2015 12:00 AM By: Rocky Mountain Outlook 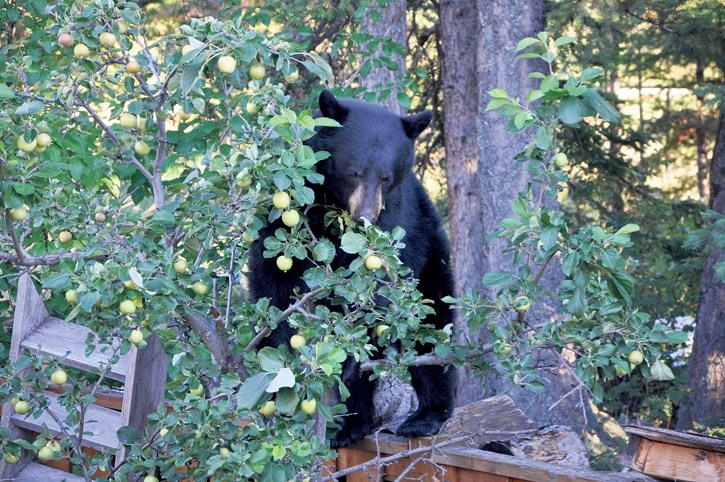 The Town of Banff plans to obtain a legal opinion on whether or not it could force homeowners with existing fruit bearing trees, considered a wildlife attractant, to remove them.

Wildlife experts say three hungry black bears relocated from Canmore last week have had their survival odds slashed in half, and the animals’ removal has re-opened the longstanding debate on fruit bearing trees within town limits.

Walking down Canmore’s busy Main Street, onlookers stopped for a double take at a series of anxious wails booming from a bear trap being pulled by a pickup truck on Aug. 18.

Inside the cylinder-shaped trap, two crying bear cubs and their tranquilized mother were being transported over 100 kilometres to unfamiliar territory where their chances of survival will be greatly reduced.

The bruins were captured and relocated after they were attracted into the mountain town by fruit trees in residential yards.

An incident such as a bear being relocated after wandering into Canmore may be common every year, but wildlife experts are encouraging – perhaps even outright urging – residents with fruit trees on their property to end the problem before it even starts.

“If you have a fruit tree, take it down because if (a bear) gets into your fruit tree, you just diminished its chance for survival,” said John Paczkowski, parks ecologist for Alberta Environment and Parks.

Local fruit trees and plants consist of crabapple, chokecherry and pin cherry, among others.

Paczkowski darted the treed mother bear last week near River Road and 8th Street and says fruit trees inside town limits are the “last piece of the puzzle” needing to be solved in an otherwise progressive bear management community.

It was the second time on Aug. 18 the bruins dined on fruit trees in a residential yard. Conservation officers drove the trio across the Bow River to Larch Island, but the bears followed their nose right back into Canmore shortly after.

Paczkowski says a poor buffalo berry crop this year – the most important vegetation food source for black and grizzly bears in the region – has the bears looking to fatten up by other means during their hyperphagia phase. It means “super-eating” and they could ingest up to 20,000 calories per day.

“When you have 200 pounds of a high calorie food source that’s just kind of out there in someone’s backyard, that’s an irresistible attractant to bears,” he said. “If we could manage these fruit trees – we’re at 90 per cent for bear management (and) this would take us to 100 per cent.”

As for the relocated bear trio, Paczkowski estimates about a 50 per cent chance they’ll survive in their new habitat near Water Valley. He says relocating bears does not result in a fairytale ending for them.

“She’s definitely at a disadvantage now,” he said. “It’s late in the season, it’s a berry crop failure, she’s in a new home range with other wildlife, it’s not a good feeling … it’s not a happy, warm and fuzzy ending for that bear just because she was moved. It diminishes her chance of survival.”

This latest bear relocation incident in Canmore highlights the need for further communication and education surrounding fruit trees and wildlife. Local wildlife conservation and education group Bow Valley WildSmart is working with the Town of Canmore on strategies revolving around fruit trees.

Although the Town cannot outright deny what species of plants residents in single home dwellings have on their property, Lori Rissling Wynn, Canmore’s sustainability coordinator, says the best that can be done is to encourage planting species that won’t attract wildlife.

“We’re actively trying to deal with the issue by engaging the community and doing it themselves,” said Rissling Wynn. “It’s neighbours helping neighbours.”

WildSmart education and outreach worker Tyler McClure said hopefully this summer the community can take some of this responsibility on themselves and assist their neighbours or friends and families that may need help to get attractants out of their yard.

“A big thing people can do is go through your yard and actively clean up anything, berries, dirty barbecues, even old paint cans, that might attract bears.

“The problem needs to solved before it’s a problem, because relocating bears or destroying bears, these are all going to result in animals no longer being on the landscape and that is going to be detrimental to our local populations.”

A large scale community fruit gleaning has been discussed, but details have not been hashed out, says McClure.

In the Town’s Animal Control Bylaw – designed for municipal purposes respecting wild and domestic animals and activities in relation to them – the term Animal Attractant means “any food, waste … or any other substance” that attracts wildlife animals. According to one section of the bylaw, “no property owner or person … shall place, store, permit or allow Animal Attractants to be left outdoors.”

Rissling Wynn says fruit trees could certainly fall under the Animal Attractants category, but the bylaw doesn’t “specifically speak to fruit trees,” rather, it references animal attractants as a whole.

“When we’re contemplating making a change like that to the bylaw, we need to think about how effective it is going to be, do we have the resources to even enforce it and is there interest from the community to have that added? All these things need to be considered,” she said. “The approach we’ve chosen to take is education and communication and promoting best practices and until we’re directed to do otherwise, that is the practice we’ll continue for the time being.”

McClure and Paczkowski weighed in on the bylaw and its definition of “food” under Animal Attractants.

Paczkowski would like to see apples and crabapples as terms used in the bylaw, while McClure doesn’t see how fruit trees don’t already fall under it.

“It’s worth looking at (the bylaw) whether or not apple trees fall under the classification of an animal attractant,” said McClure. “If they do not under this particular document, I think it would be worth investigating and including non-native fruit bearing trees in this bylaw in the future.”