"It’s not always a positive [world he lives in], or an easy one, and that’s why asking for these things are important because we are just trying to elevate his standard of living."
Jan 6, 2021 8:10 AM By: Jordan Small 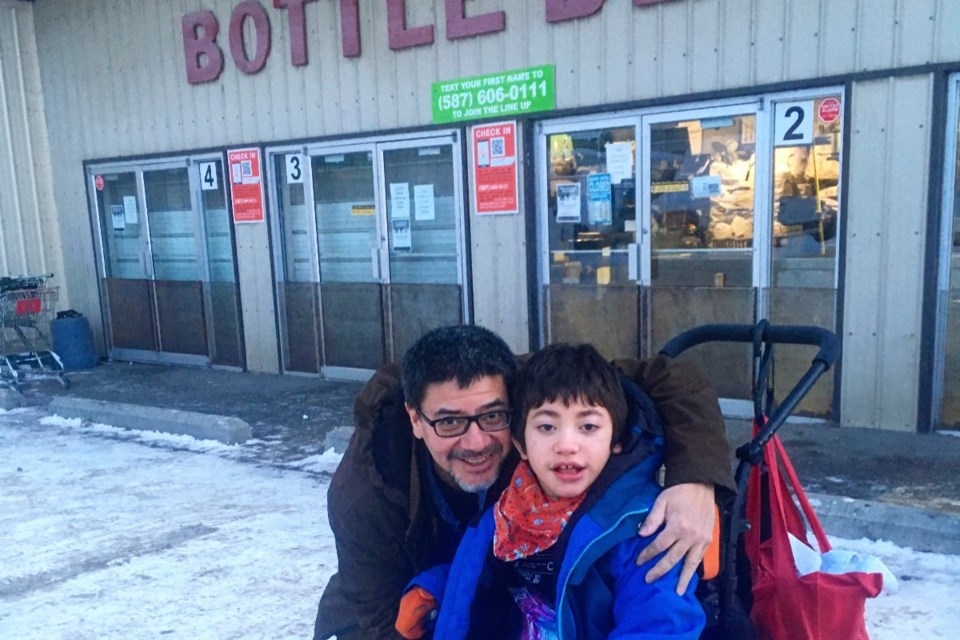 Ramon Bravo Sr. and Ramon Jr. outside of the Canmore Bottle Depot. The depot is helping the family raise funds for a new wheelchair accessible van and equipment. SUBMITTED PHOTO

CANMORE – For a chance at a better quality of life, family and friends of a Canmore boy with a complex medical history are reaching out to the community for support during tough times.

A GoFundMe for Ramon Bravo, a 10-year-old living with quadriplegic cerebral palsy, is trying to raise $100,000 for medical equipment necessities that the family urgently needs for him moving forward.

Having watched Ramon get older and grow bigger, Max Monk, the family's aid, said he’s quickly outgrowing aging equipment and the family's only form of transportation.

“Ramon is an incredibly sweet boy and he loves to laugh. He’s incredibly kind and patient,” Monk said. “This kid goes through levels of pain, excruciating amounts of pain every day and he just kind of blows it off. He’s just very brave.”

Each of Ramon's four limbs are affected by cerebral palsy. The boy lives a tough life and faces arduous barriers every day, said Monk, who added Ramon cannot speak, or eat and walk on his own.

Adaptive equipment is needed for daily activities and transportation, as he is very limited in what he can do and requires round-the-clock care from family and his aid. One parent sleeps beside their son nightly to make sure he does not aspirate or choke while sleeping.

As an immunocompromised individual, Ramon has a weakened immune system and is prone to illness. During the COVID-19 pandemic, he has been isolated at home, unable to go to school.

An outdated and unreliable family van has grounded the family from taking any day trips or vacations and is primarily used to drive to the Alberta Children's Hospital in Calgary. Getting ready to drive to the hospital takes up to an hour to prepare.

COVID-19 has been hard on a lot of people, but Monk said it's been 10 times harder on Ramon.

A more sombre way of putting it, is the child is a prisoner in his own home.

“It’s mostly just surviving, and that’s kind of the reality of the world he lives in. It’s not always a positive one, or an easy one, and that is why asking for these things are important because we are just trying to elevate his standard of living … to just allow a chance to do things.”

Equipment the family is wanting to purchase are a sleep positioning system for safety and comfort, new car seat, specialized stroller for walks, hiking, and biking, and FAA approved seat for flight travel.

But a big chunk of the lofty end goal, about $50,000, is for replacing the 18-year-old family van that is used to take Ramon to the hospital weekly.

A wheelchair accessible van is the No. 1 priority, Monk said.

“We’re at max height for the van; his head is about three centimetres from touching the top – it’s very tricky already to get him into the van,” said Monk.

“It’s something really important for the family right now because it is literally the only way to transport him and the car is kind of on its last legs.

“Unfortunately, there are a lot of things we can’t get covered, like the car, like the sleep positioning system. These things are out of pocket and are often incredibly expensive.”

The aid's firsthand knowledge of the issues and tough decisions prompted the online fundraiser for Ramon, who has become the closest thing to a brother Monk has had over the past five years of being with him.

In the community, the Canmore Bottle Deport is helping the family raise funds after a donation account was set up under Ramon’s Account.

"It is definitely a worthy cause," said Ike Dhanda, general manager at the Canmore Bottle Depot. "We do allow specific [charities and fundraisers] and obviously the boy and his family really need help, so for that one we allowed them to put something on the windows of our doors to donate to this cause.

"There is also going to be a bottle drive. So we have arranged behind our depot, there are some doors there where people can drop it off, instead of lining up."

In a social media post, Ramon's parents Ramon Sr. and Katy Stewart thanked the community for its support.

“Biggest thank you to everyone for your support and help," stated the post. "Ramon is such a wonderful and happy person all the time, even though he has so many hardships in his life. His love and light has attracted so many amazing people to help him along in his journey.”