The white-tailed ptarmigan is a remarkable bird, living its entire life trying to thrive and survive in harsh alpine environments.
Apr 7, 2011 12:00 AM By: Rocky Mountain Outlook 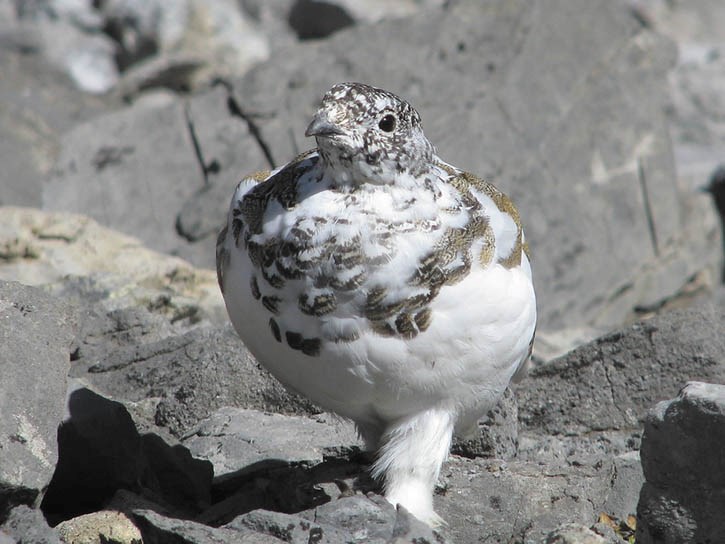 The white-tailed ptarmigan is a remarkable bird, living its entire life trying to thrive and survive in harsh alpine environments.

This smallest member of the grouse family is well adapted to life in frigid climates and is, in fact, one of the few species hardy enough to live in the alpine year-round in North America.

It’s evolved with impressive coping strategies to survive in the severe high country, including feathered toes that function as snowshoes, highly cryptic plumage that allow them to hide, and an energy-conserving daily regime.

But despite this proven ability to adapt, scientists don’t know how well the ptarmigan will fare into the future – or not – given fears their habitat may eventually shrink with the onward march of climate change.

“For most of their range, climate change is potentially the largest threat to them,” said ptarmigan expert Kathy Martin during a presentation of the Bow Valley Naturalists, March 23.

“They live in and have adapted to cold, harsh conditions. They have trouble if it gets too warm.”

Martin’s presentation was part of a series of programs planned by BVN this year to focus on what are known as High Elevation Localized Species (HELS).

Little is known about the status, ecology and conservation of many alpine bird species, including the white-tailed ptarmigan, which ranges from Alaska and Western Canada south to northern New Mexico.

Daily temperatures in the mountains can range from hot to sub-zero, but ptarmigan must provide constant warmth to incubate eggs and rear their young. Breeding seasons are short and birds must be able to delay egg-laying in years when snow melt is late.

Ptarmigan are an important prey species too, facing a constant challenge to produce offspring before succumbing to one of many potential predators.

“If there’s delayed snowmelt, predators can have a really easy time going from bare spot to bare spot,” said Martin, a professor in the Faculty of Forest Sciences at the University of British Columbia and a senior research scientist with Environment Canada.

“They can’t defend eggs against a predator, so the solution ptarmigans have is try and try again. They are good at re-nesting and sometimes they’ll do a third clutch.”

Martin’s theory is that alpine birds are ‘rewarded’ for choosing to breed in a more difficult habitat like the alpine, by living longer. For many birds breeding at lower elevations, it’s a ‘live fast, die young’ kind of lifestyle, while birds at high elevations appear to follow a ‘live slow, die old’ model.

She said different studies, however, have detected different patterns. For example, in the Yukon, white-tailed ptarmigan have twice as many chicks as the same birds in Colorado.

The ptarmigan in Colorado also have a higher survival rate, she said.

“There’s something different going on here,” said Martin, who has been studying ptarmigan since 1987, including in Colorado, Yukon and Vancouver Island.

In the short-term, Martin said ptarmigan will have to deal with weather variability brought on by climate change – winters getting warmer and the frequency of extreme events increasing.

One example that would prove difficult, she noted, is rain followed by temperatures sinking to freezing again and encasing the bird’s habitat in ice.

“They’re very good at dealing with extreme weather conditions, but they have their limits,” said Martin.

In the long-term, the white-tailed ptarmigan will face challenges as tree and shrub lines are expected to rise, leading to patches of alpine habitat getting smaller and more isolated.

“Effectively, this is habitat loss as well as fragmentation,” she said.

In addition, Martin said climate variability and seasonality could also lead to strong delays in the onset of breeding due to delays in snow melt.

“If the ground does not become snow-free, birds cannot start nesting as they have ground nests,” she said.

“Also, if the nests are started late in the season, there is not enough time for the hens to start a second nest after their first nest fails, and that can lead to increasingly unreliable breeding habitats.”

Martin also said delays in the onset of fall or winter could also result in the wrong colour of ptarmigan. During the winter, the bird is completely white, but is a mottled gray and brown color throughout the spring, summer and fall, providing perfect camouflage.

“The wrong colour may well pose problems, possibly not so much in adults because they are experienced,” said Martin.

“But this mismatch in colour between the birds and their habitat could be a problem for the juveniles because they are generally more naive and they also have to put more energy into completing their body growth before fall, so need to focus on eating rather than hiding.”

But at the end of the day, Martin said she had no concrete answers on the ability of white-tailed ptarmigan to cope with environmental change.

“I don’t have any yes or no answers, but there are things that allow them to adapt,” she said.

“The fact they have really good dispersal behaviour and can wait for a month to six weeks to breed in a season. And, at present, alpine habitat is in reasonably good condition.”

The biggest problem, however, is there is so little background data or monitoring to establish the ‘reference conditions’. In Alberta, there are only three papers on the species.

“In other words, mostly we do not know what a normal population size is and how much they can vary and still have the populations persist,” said Martin.

Of interest, Martin said, the Ruppell’s vulture is the bird recorded flying at the highest elevation, at 11,000 metres. By comparison, Mount Everest stands 8,848 metres high.

The highest breeding bird is the Grandala – found in Bhutan, China, Myanmar, Nepal and India – at 6,600 metres, followed by the snow pigeon distributed across a similar region, and the Tibetan lark.

“In North America, the winners are the horned larks, rosy-finch and the white-tailed ptarmigan, where nesting has been recorded well over 4,000 metres,” she said.

“These birds are able to survive, but they do all the hard work of reproduction and looking after their young in very high elevations. There’s only a few species of bird that breed exclusively in the alpine like the white-tailed ptarmigan.”