A significant portion of Banff’s grizzly bear population is using wildlife crossing structures to safely get across the busy Trans-Canada Highway and access important habitat, according to a new landmark study.
Aug 15, 2013 12:00 AM By: Rocky Mountain Outlook 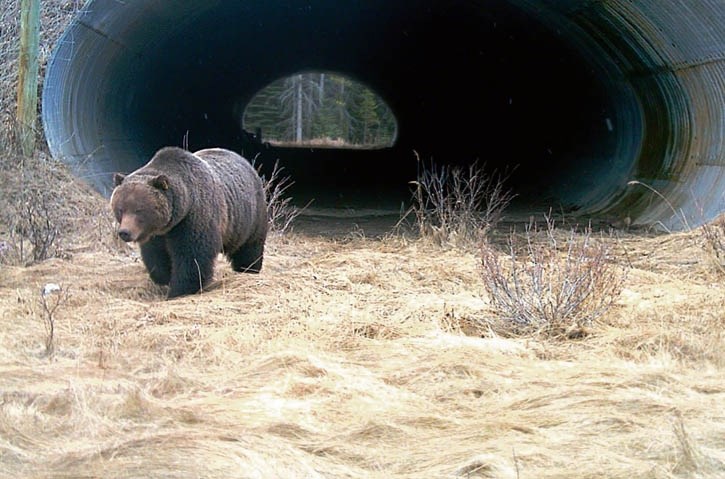 A large male grizzly with a radio collar passes through an underpass at Castle Junction below the Trans-Canada Highway in Banff National Park.

A significant portion of Banff’s grizzly bear population is using wildlife crossing structures to safely get across the busy Trans-Canada Highway and access important habitat, according to a new landmark study.

The study identified 15 individual grizzly bears and 17 individual black bears that used the highway crossings over a three-year period – close to 20 per cent of the estimated population.

Researchers say it’s encouraging that a highway punctuated with 25 different crossings did not fragment the habitat in a way that prevented bears from seeking food, shelter and dispersal areas on either side of the highway.

Mike Sawaya, co-author of the study, said movement of more than 10 per cent of a population across the highway signals there is sufficient connectivity to maintain a healthy ecosystem for bears.

“This is meaningful from a population perspective. This is a substantial portion of the population that are using the crossings structures,” said Sawaya, a 2012 graduate of Montana State University (MSU).

“One of the unique results, to me, is we were able to discover that these crossings are really allowing access, especially for female grizzlies, to areas like important low-elevation Bow River habitat.”

One of the world’s most developed and well-known wildlife crossing systems is found in Banff National Park, where more than three million visitors arrive every year and an average of 18,000 cars a day travel the highway.

Two overpasses and 23 underpasses were built in the 1980s and 1990s to reduce the number of animals getting hit by vehicles and to maintain wildlife movement across the four-lane highway.

Wide-ranging carnivores like grizzlies are susceptible to fragmentation because of roads due to their low densities and reproduction rates, as well as large home ranges.

Roads are the most common form of man-made disruption to wildlife habitat and, in the case of the Trans-Canada Highway, pose a direct threat to a threatened Alberta grizzly bear population.

This latest work looked into whether wildlife crossings provide demographic connectivity for grizzly and black bears in Banff National Park. It was recently published in Conservation Biology, a peer-reviewed scientific journal.

The study was part of Sawaya’s doctoral work, for which he teamed up with Tony Clevenger, a local wildlife biologist and a senior research scientist at MSU’s Western Transportation Institute, and Steven Kalinowski, an associate professor of ecology at MSU who was Sawaya’s advisor.

In 2006, researchers began setting out non-invasive hair snags – strands of barbed wire strung across the crossings that collect samples from bears lured to a scent, and rub trees with wire attached.

Over the next three years, hair samples were collected from 20 crossings, 420 hair traps and 497 rub trees. They ended up with more than 10,000 genetic samples.

Their research found that 15 grizzlies – seven female and eight male – and 17 black bears – eight female and nine male – used wildlife crossing structures to access habitat on both sides of the highway.

The researchers believe those numbers are actually conservative, noting it’s probable there were bears that managed to evade the hair collection traps at the crossings.

Peak use of Banff’s wildlife crossing structures for both bear species occurred in July, when high rates of searching for food coincide with mating season.

The results concluded grizzly bears used overpasses more often than they travelled through underpasses, such as culverts or under bridges. In fact, they preferred overpasses 90 per cent of the time.

Grizzly bear crossings were highly concentrated at two overpasses and one larger open-span underpass west of the Banff townsite, whereas black bear use were evenly distributed and more concentrated to the east.

“You can put in underpasses cheaper, but this data means you can justify putting in overpasses,” said Sawaya. “If you want female movement, you’ve got to put in overpasses.”

Clevenger could not be reached for comment at press time, but in a news release he said this is a landmark study, noting it’s the first time extensive genetic sampling has been done to address unanswered questions about the use of highway crossings by bears.

“We knew that bears used the crossings, we just didn’t know how many, what percentage of each species’ population uses them, whether there is a preference by males or females to use crossings, and if there was a gender or species preference for overpasses or underpasses,” he said.

Another paper from the study due this fall will break down what ecologists call gene flow between bear populations in the Banff ecosystem. That data should help gauge how well the crossing structures perform in allowing different bears to find mates in an environment bisected by a major highway.

“By collecting the genetic data on each bear using the crossings, we have a much more powerful tool for gauging the effectiveness of the crossing structures to provide connectivity within the ecosystem,” said Clevenger.

Clevenger, who has been tracking the numbers of bear crossings on the Trans-Canada Highway crossing structures for more than a decade as part of the Banff Wildlife Crossings Project, said the study’s findings are a breakthrough.

“This is confirmation of what our previous investigations have suggested but couldn’t confirm,” Clevenger said. “We were pretty certain that the numbers of bears using the crossings had steadily increased. Now we know.”

In addition to bears, Banff’s crossings have seen documented use by deer, elk and moose, as well as wolves, wolverines, lynx, cougars and a host of other animals.