A 106-year-old icebox building on Canadian Pacific Railway lands in Banff has been saved from demolition and is intended to be part of a larger revitalization project for the dilapidated train station lands.
0
Mar 16, 2017 12:00 AM By: Rocky Mountain Outlook 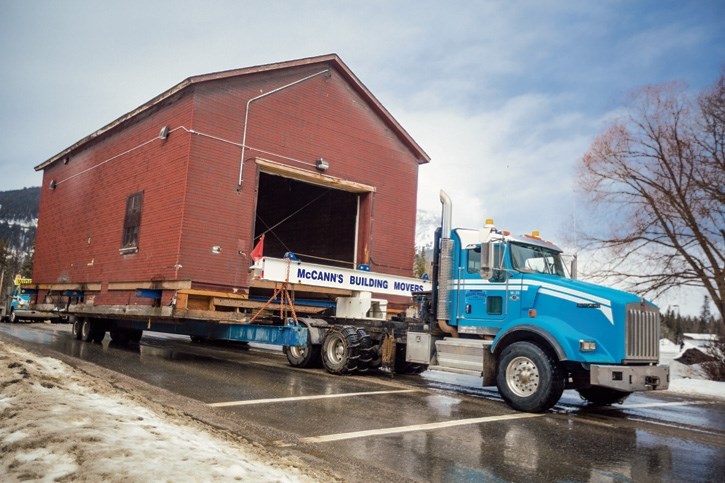 The historic icebox building is moved across the rail yard at the Banff Railway Station on Tuesday (March 14).

A 106-year-old icebox building on Canadian Pacific Railway lands in Banff has been saved from demolition and is intended to be part of a larger revitalization project for the dilapidated train station lands.

After the Town of Banff slapped CP with a stop order last fall to prevent imminent demolition of the icebox – one of the few remaining original refrigerator buildings in Western Canada – it’s been working to come up with a solution.

An agreement was reached between the municipality, CP and the new leasehold tenants of the train station, Liricon Capital, a personal financial holding company for Banff residents Jan and Adam Waterous, which saw the icebox temporarily relocated to the south side of the tracks on the station grounds, Tuesday (March 14).

“Effectively, Adam and Jan have made this rescue possible. Without them the building would likely be demolished,” said Darren Enns, the Town of Banff’s senior planner.

“As the town develops there will be continued pressure for heritage buildings to be demolished or removed. This is an important illustration of how we can balance our development requirement with heritage needs.”

The Town of Banff considers the icebox an important building as it meets Alberta Culture’s significance criteria for heritage value because it represents both cultural and architectural value.

The facility, located about 140 metres northeast of the train station since built in 1910, has been moved to the south side of the tracks near willow trees along Railway Avenue.

The Waterous’, when entering into the lease agreement with CP, had a goal to see restoration and redevelopment of the site and ultimately, return passenger rail service between Banff and Calgary.

Jan Waterous said they were exited to be able to save the icebox building.

“Our hope is we can revitalize the whole train station and turn it into a railway heritage gateway to Banff, to have it as an arrival centre for the town of Banff,” she said.

“The icebox for us is part of, we hope, a broader plan to bring that heritage element to the town of Banff.”

The future use of the icebox building is still under discussion.

Under Banff’s current land use bylaw, uses allowed on the train station lands include railway services and eating and drinking establishments.

Attempts to include other commercial uses have not been accepted by Parks Canada, based on legal and policy concerns.

“We’ve always talked about revitalization of the station lands,” he said.

“In close collaboration with the Town of Banff and our tenant of Banff station and station grounds, CP has come to an agreement to relocate the building to the satisfaction of all parties,” said CP media spokesperson Jeremy Berry.