Canmore residents are definitely interested in solar power. At the beginning of summer, the municipality unveiled a new incentive program to help eight local families install photovoltaic cells on their homes.
Oct 9, 2014 12:00 AM By: Rocky Mountain Outlook 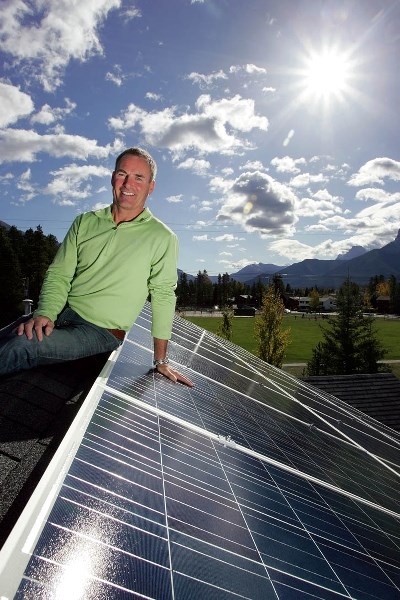 Canmore’s Joey O’Brien shows off the 40-panel solar energy system on the roof of his family home.

At the beginning of summer, the municipality unveiled a new incentive program to help eight local families install photovoltaic cells on their homes.

“Because the program was really small scale and we were only able to offer it to eight families, the intent was to be narrow and deep as opposed to shallow and wide,” Rissling Wynn said. “We wanted to make sure it wasn’t only those eight families that were touched by the program, but the community in general, and that is a critical piece; sharing those stories and celebrating those installations.”

Like most incentive programs, there were requirements that had to be met by homeowners to access the funding. That included opening their homes up to the community to showcase the initiative.

Joey O’Brien and his family did just that on Saturday (Oct. 4), welcoming 60 people to an open house at his Lion’s Park home.

He said there was a wide array of people from the community that came to learn more.

“It was really useful for the local citizens of the community because they got to touch and feel and look and I gave them the hard numbers I have observed to this point,” he said.

O’Brien said he has even noticed that his family is more aware of electrical consumption as a result of the solar installation. Part of the system includes monitoring energy generation. So far in October, he said he has generated 100 kW because of the warm and sunny weather, although at a rate of 0.08 cents per kW hour, the savings only totals approximately $10 so far.

“Really, economically I haven’t put a whole lot in the bank, but it is fun just watching it,” he said.

O’Brien chose to install a 10 kW set of solar panels on his home, whereas a minimum 2.5 kW was required for the program. On average, a three kW system costs around $12,000.

When it comes to solar generation in Alberta, O’Brien said some of the provincial policies with regards to the environmentally sustainable effort differ from other jurisdictions.

“It is not customer friendly,” he said. “In a lot of jurisdictions you can actually put into the system and sell power to the grid.

“All you can do here is design a system and install a system that nets out at zero.”

If the solar installation generates more power than is consumed by the homeowners, they don’t receive compensation for putting energy back on the grid. The process to determine the permitted strength of the solar array includes reviewing past energy consumption. The system is also leased from Enmax, and O’Brien said he chose a 15-year lease, which adds value to his home.

While the $1,250 incentive doesn’t pay for the whole system, he said it helps encourage those already considering solar to take the next step.

“The incentive program did what it was supposed to do, it took someone who is predisposed to solar and tipped us over to the yes category,” O’Brien said.

Rissling Wynn said being able to see the solar installation and ask questions at the O’Brien’s is a great way to educate the community on the potential for renewable energy in Canmore.

“We actually have quite high solar potential, so that was also part of the program; to demonstrate to people it is possible,” she said, adding she would encourage homeowners to investigate solar even without the 10 per cent incentive. “We want to encourage people to adopt solar regardless.”

Another tour of a home that has solar installed through the program will be held on Oct. 18 with the Festival of Eagles event.

As for the future of the program, that depends on council and its upcoming 2015 budget process.