Over half a century, the soles of thousands of shoes left their mark on one of the remaining relics of a once booming energy and electric Municipal District of Bighorn community.
Feb 5, 2015 12:00 AM By: Rocky Mountain Outlook 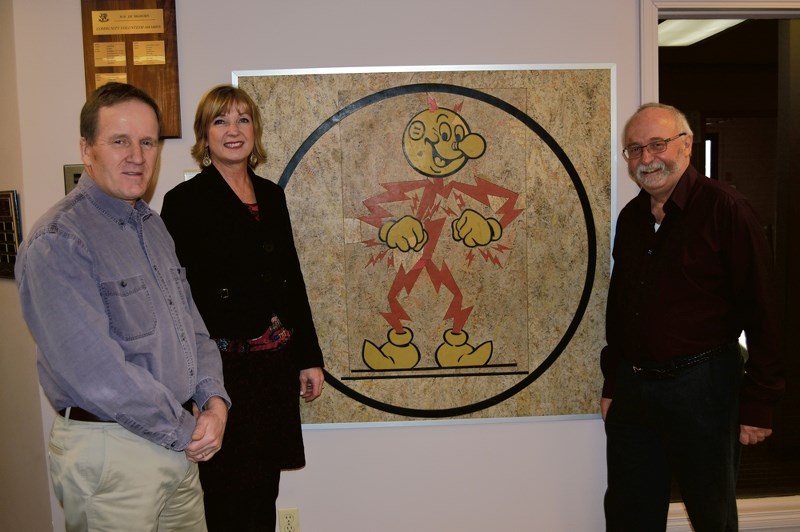 Over half a century, the soles of thousands of shoes left their mark on one of the remaining relics of a once booming energy and electric Municipal District of Bighorn community.

Even after all the years of dirt smudged stains and icy snow clumps being dragged over it, and anything else the bottom of a pair of shoes can transport, the smiling face of the Reddy Kilowatt logo, with its light bulb nose and electrical outlet for an ear, greeted Bow Valley visitors for decades – and will continue to do so.

Reddy Kilowatt, an internationally recognized registered trademark to promote electrical appliances since 1926, lay in place on a floor in a staff house for Calgary Power (now TransAlta) in the Seebe settlement from the late 1950s to late 2000s.

And just like Reddy saluted Calgary Power/TransAlta staff members and visitors in the small community for many decades, the friendly yellow-faced, red-bodied character will continue to be a welcoming expression at its new location on a wall near the front entrance at the MD of Bighorn’s office in Exshaw.

Bighorn staff reacted swiftly when the Seebe settlement was officially closed and dismantled in 2008. The MD saw Reddy’s historical value from the small town that brought electricity to the area for nearly 100 years.

As Reddy was one of few relics of Seebe remaining, Martin Buckley, MD of Bighorn chief administrative officer, requested the hand-cut version of Reddy Kilowatt be donated to the MD by TransAlta, which obliged.

“When (the Reddy Kilowatt installment) came to us it was in very rough shape,” said Buckley. “It was in bits and pieces, it had been walked on and hadn’t been looked after.”

The piece of floor the logo was on was made from a material called linoleum, also known was Battleship Linoleum, which was a very standard product used to create flooring before vinyl floors. A TransAlta employee could toss a cigarette butt on Reddy and the grinning personality’s material wouldn’t feel the burn.

But years of wear-and-tear left the logo’s colours partially faded and small chunks of the flooring had been uprooted in various areas.

The MD was grateful to be in possession of the donated historic piece, but was unable to do much with it unless the 1.56 squares metres of floor received the talented touch of a craftsman to restore it.

The MD sought the assistance of Armstrong World Industries’ Calgary location, an international floor and ceiling design and manufacturer, to take on the project of restoring the worn-out artifact.

“I told Martin that we could repair the actual piece with new pieces in it,” said Tavia Tilson, Armstrong World Industries’ distribution manager Western Canada, who was pleased to take on such an interesting project.

“We had to take a picture of the actual logo and send it to a laser jet cutting place and said, ‘This is what we’re looking to do, what do you need?’ ”

The piece was restored in Calgary with some of the original Reddy Kilowatt colours included, but some of the colouring was a little bit more difficult to work around, said Tilson.

As an addition to the restoration, two replicas of the flooring piece and trademark were created with new products, one of which Armstrong World Industries took to display in their headquarters in Pennsylvania.

The book Powering Generations – The TransAlta Story, 1911-2011 by David Finch, details the history of Seebe when Calgary Power Company Ltd. acquired the energy-rich land on the Stoney Reserve in 1909 and constructed two dams –Horseshoe Falls Dam and Kananaskis Dam – in the ensuing years at the Bow and Kananaskis rivers.

It was during construction of these two dams that the Seebe settlement was born, consisting of 22 homes, a 17-room apartment complex, a multi-use one-room schoolhouse, a general store, and recreational structures.

By 1929, Calgary Power supplied electricity from the dams at Seebe to 98 communities across southern Alberta, including Exshaw’s Canada Cement Company (now Lafarge).

From 1951 to the mid ’80s, Calgary Power had a control centre in Seebe to manage all of its automated facilities until ’85, when a new Calgary-based control centre opened. It marked the beginning of the end for the once prosperous little energy community.

Less than a dozen years after the new system in Calgary took over, Seebe School ceased operations. While the two dams remain in operation, the Seebe town site officially closed in 2004 and four years later the demolition of much of the infrastructure occurred.

One of very few artifacts left of the Seebe settlement, the Reddy Kilowatt installment, which saw many hydro electrical workers who helped to shape Alberta, is now displayed for all to see.