A famed Scottish climber had a lucky escape after being attacked by a grizzly bear defending its den high on the slopes of Mount Wilson in Banff National Park on the weekend.
Dec 1, 2015 12:00 AM By: Rocky Mountain Outlook 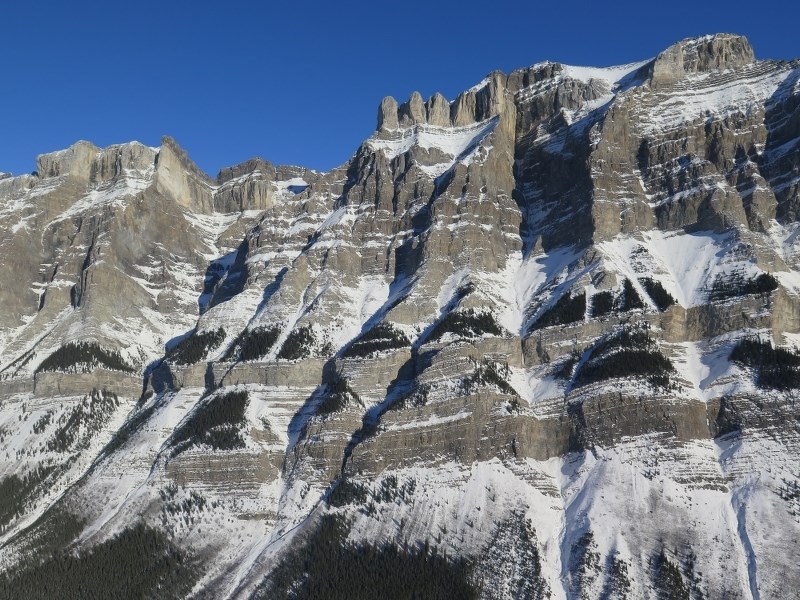 The location of the grizzly bear attack.

A famed Scottish climber had a lucky escape after being attacked by a grizzly bear defending its den high on the slopes of Mount Wilson in Banff National Park on the weekend.

Greg Boswell, considered one of the most talented climbers of his generation, was climbing with Britain’s Nick Bullock on Sunday (Nov. 29) when the bear attacked him directly above steep cliffs about 2,200 metres up on the 3,261-metre mountain.

“I got attacked by a grizzly bear last night and lived to tell the tale, and to make the 3 hour descent and 2 hour drive to the hospital,” wrote Boswell on a Facebook post. “I'm ok, just a little shook up and sore… All stitched up now and on the mend.”

Boswell and Bullock were on a reconnaissance mission to prepare for a planned climb two days later of Dirty Love, a 500m, 12-pitch alpine climb high on Mount Wilson, located off the Icefields Parkway north of Saskatchewan River Crossing.

The climbers, two of the U.K’s best ice/mixed climbers, were on their way down when the drama began to unfold about 7:30 p.m.

“Greg was behind. “Bear, aaaaaaargh,” he wrote on a blog post. “I spun to watch Greg sprint past me and in hot pursuit was a grizzly. The bear bounded, pulling and pushing the snow with powerful legs.”

As Bullock ran uphill, Boswell fell on his back and watched as the grizzly kept coming.

“It jumped. Screaming and shouting, Greg kicked at Ursus arctos horribilis and it bit straight though his brand new boot as if it were a carpet slipper,” he wrote.

“It lunged once more and crunched into his shin, placing a paw on his other leg before lifting him off the ground.”

Boswell grabbed the bear’s mouth and prized apart the jaws, pushing and screaming to his friend, “Nick, Nick, help, it’s got me …”

As Bullock went to help his friend, a dark shape ran at him from out of the darkness.

“But the shape was Greg, screaming and running and shouting,” he wrote. “I looked into his ashen face and saw something I had never seen.”

In their panic they got lost as they tried to find the location where they needed to continue abseiling.

With headlamps and armed with axes, they were on alert to see if the bear had followed them.

“If it comes, no running, we stand together and hit the bastard,” wrote Bullock.

Wildlife staff flew over the extreme terrain in a helicopter on Monday (Nov. 30) and confirmed it was a denning location, noticing lots of bear tracks in the area immediately surrounding the den.

“We’ve put a closure in place to protect this bear from disturbance in its den during winter and that closure will be in place until spring,” said Jon Stuart-Smith, a human-wildlife conflict specialist for Lake Louise, Yoho and Kootenay.

“We had to balance protecting this bear and the potential for other people to have a negative encounter with it, while still allowing people opportunities to climb in some of the surrounding areas.”

Stuart-Smith said the bear acted as expected, noting it was a defensive attack.

“These folks startled the bear. It came out of the den and attacked them in a defensive way. As the bear is trying to den, it’s quite sensitive to disturbance and, unfortunately, they got too close to the den,” he said.

“The bear attacked them in order to get them out of the area. It was just trying to tell these guys ‘you are in my area, go away.’ It wasn’t necessarily trying to kill them or injure them in any way, just trying to get its message to them.”

Bears will aggressively defend their dens. In 2006, a grizzly bear killed a 28-year-old man north of Whitehorse in the Yukon when he came within five metres of its den, which had two cubs inside.

“It’s potentially a very dangerous situation,” said Stuart-Smith. “There have been situations where people startled bears in and near dens and people have been injured or killed in those situations.”

Stuart-Smith said the location of the den, on a fairly steep slope in deep snow, is quite characteristic of a den location.

“The fact that it was between some larger cliff bands is unusual,” he said. “The den site was around 2,200 metres.”

“Grizzly bears can still be out at this time of year, but there are also other wildlife like cougars that people can encounter,” said Stuart-Smith.

“We hope this individual makes a speedy and healthy recovery. Our thoughts are with him,” he said.