Lafarge Canada is planning on developing a community outreach plan as part of the plant expansion and modernization project set to begin this fall.
Jun 21, 2012 12:00 AM By: Rocky Mountain Outlook 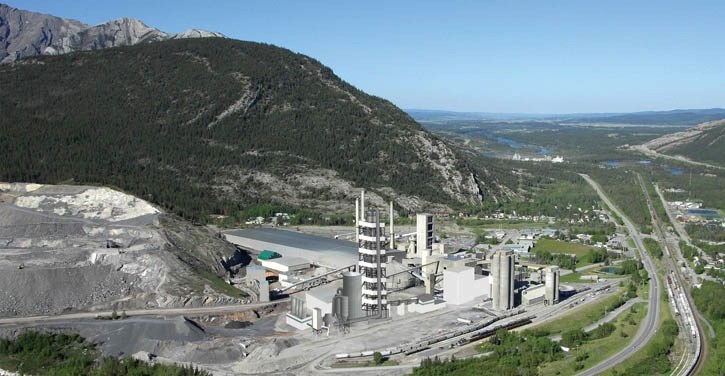 A rendering of the new kiln line planned for the Exshaw cement plant. Construction of the footings and foundations is set to begin this fall.

Lafarge Canada is planning on developing a community outreach plan as part of the plant expansion and modernization project set to begin this fall.

Lafarge is looking to build a new kiln line on the western side of the current facility with the intent to replace outdated technology and increase production at the 107-year-old cement plant by up to 60 per cent.

The company submitted its development permit application to the MD of Bighorn in early June in order to begin constructing the necessary foundations to support the new equipment, including a five-stage preheater, precalciner tower and a new rotary kiln.

The Alberta government has already given Lafarge permission to proceed with the project.

“Over the next three years during the construction phase we anticipate there is going to be additional traffic, extra contractors on site, and we will be sharing regular updates with the community and will continue to respond as quickly as possible to complaints,” Knopfel said.

“Our neighbours are really important to us. We recognize it is a partnership. We meet regularly with the surrounding communities. We want to understand how they feel about their operations and what we can do to improve their life or lifestyle.”

Lafarge is planning to continue its hotline and community liason committee as well as implementing a website dedicated to the project to provide regular updates, milestones and what residents should expect.

The company is planning to hold community meetings as well.

However, Knopfel said a key element in the outreach plan is to first work with the community to establish how residents want to receive information and updates.

“We want to understand how the community wants us to communicate with them,” he said.

Lafarge is expecting construction to take approximately three years with the foundation work beginning this fall.

Knopfel said he expects this first phase would not have a significant effect on traffic or noise as the number of contractors working on site would be low with only cement trucks and the drilling contractor coming to the site.

Two cranes will also be working to move equipment stored on the project site.

Construction on the kiln line itself will likely begin in 2013 with the peak in 2014. At that point, Knopfel said he expects there could be a range of 200 to 350 contractors working on site.

“We recognize that traffic will likely be an issue for us, so we will probably have a number of staging areas and bus those contractors on site,” he said, adding those staging areas could be located in Canmore, Banff, Cochrane and Calgary, as required.

Construction supplies will also come into the plant through the contractors’ entrance, located on the 1A Highway at the plant’s west end.

The plant expansion and modernization project is also a good opportunity to improve traffic flows at the plant, Knopfel said.

Instead of having resource and product trucks enter at the same point, which is what currently occurs, trucks will leave the plant through the current main entrance and enter through a new gate to the west beyond the railway crossing.

“Instead of the entrance, which is a real bottleneck, we’re going to streamline the flow of traffic, which we know will mitigate a lot of the concerns of the community,” he said.

As well, once completed, approximately two-thirds of the plant’s cement will leave Exshaw by rail.

Overall, Knopfel said he expects the project to have a positive effect in the Bow Valley, environmentally, socially and economically.

“I expect the plant expansion will provide tremendous benefits for the community.”

Environmentally the standards will be raised beyond the new Alberta requirements. “We’re consciously aware of where we are relocating equipment and we’re trying to relocate the equipment as far away as possible from the community,” Knopfel said.

Along with improvements in traffic flow and noise, he said the new kiln line would also reduce plant emissions.

“On the emissions side we’re going to exceed the Alberta regulations for all of our emissions, which will have a tremendous positive side on the community. The overall impact will be reduced.”

The Municipal Planning Commission for the MD of Bighorn is scheduled to review Lafarge’s municipal development permit application July 18, as reported in last week’s Outlook.