Candidates for Banff-Airdrie are already on the campaign trail, with voters expected to go to the polls on Oct. 21
0
Sep 12, 2019 2:12 PM By: Jenna Dulewich 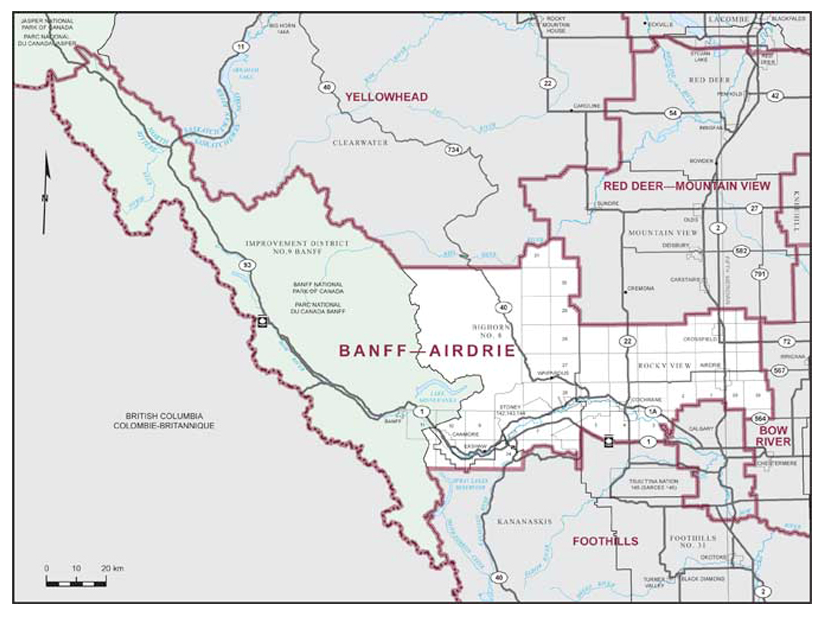 The Banff-Airdrie riding for the 2019 federal election.

BOW VALLEY – Canadians are officially heading to the polls on Oct. 21 and Bow Valley residents currently have a choice between four candidates.

The Liberals announced their candidate, Gwyneth Midgley, for the Banff-Airdrie riding earlier this week. Midgley recently ran in the provincial election for the Banff-Kananaskis riding and came in fourth place with more than 228 votes out of the 21,110 ballots cast.

The NDP said they have three potential names for a candidate with a Sept. 30 deadline to choose.

"In every election as Canadians we get to make an important choice for the future of our country, we get to decide what kind of future we want to build together," Justin Trudeau said on the steps of parliament in Ottawa Wednesday morning.

Incumbent Blake Richards, who was first elected to the House of Commons in 2008 and has served the riding ever sinced as a Conservative MP, started hitting the campaign trails early as he tweeted out on Tuesday (Sept. 10) that he was starting to install lawn signs.

Installing our first #TeamRichards @CPC_HQ Lawn Sign for the 2019 #TrudeauMustGo Campaign! There’ll be another 2,000 pre-requested signs to follow in the next few days#BlueShoesBlueWave #victoryisknocking pic.twitter.com/doPFZPF4uF

Austin Mullins, running for the Green Party also sent out a social media message saying he will be working "non-stop over the next 40 days to earn your vote."

Good morning #Banff-#Airdrie! We are officially off to the races! I will be working non-stop over the next 40 days to earn your vote! I can’t wait until October 21! #elxn43 #cdnpoli pic.twitter.com/M1JeAuLR58

Meanwhile the People's Party of Canada candidate Nadine Wellwood spent her Monday campaigning in the rain in Crossfield, stating
"neither rain, nor snow or dead of night shall keep Nadine from giving Banff-Airdrie voters a stronger conservative voice in Ottawa."

Alberta recently returned to a United Conservative Party to the Legislature in April after unseating the NDP who took control in 2015. Prior to the NDP provincial ruling, the Alberta Progressive Conservatives party was in power since the 1970s.

According to the 338canada.com blog, the latest projection for the Banff-Airdrie riding is a Conservative Party of Canada win.

EDIT: An earlier version of this article had misidentified the Banff-Airdrie Liberal candidate as Jaro Giesbrecht.