Anne Wilson from Canmore will be the NDP candidate for the upcoming federal election, while Gwyneth Midgley has been nominated for the Liberals – Canadians head to the polls on Oct. 21
Sep 19, 2019 12:36 PM By: Jenna Dulewich 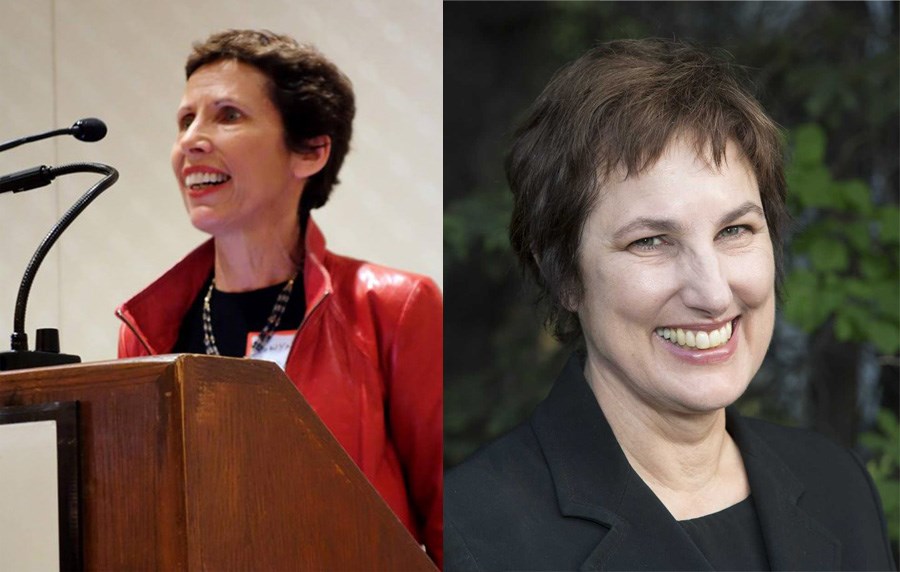 The two most recent Banff-Airdrie riding federal candidates, Gwyneth Midgley for the Liberal Party (left) and Anne Wilson for the NDP (right).

BOW VALLEY – With the federal election just a month away, the Liberals and NDP have announced their candidates just in time to get lawn signs up and start campaigning.

The fourth candidate for the Banff-Airdrie riding was announced last week when Gwyneth Midgley confirmed she would be running for the Liberal Party while Anne Wilson was confirmed for the NDP Wednesday (Sept. 18) morning.

Midgley, an Alberta resident for 25 years years with four children, recently ran for the provincial election for the Banff-Kananaskis riding and came in fourth place with 228 votes out of the 21,110 ballots cast.

Midgley said she wanted to run for the Liberals because the party offers the right balance of addressing climate change and protection of the environment. The Liberal candidate will be focusing on affordable housing, the environment, sustainable tourism, supporting small businesses and entrepreneurs, and improving the lives of families and seniors.

Meanwhile Wilson, working as a criminal defence lawyer in the Bow Valley, said she decided to run for the NDP because she wants to work for the ordinary working Canadians, not the wealthy and few and larger corporations.

Wilson said she knows housing is a huge problem for young families and working people, to either buy or find a rental, and would focus on affordability issues, while also proposing a meaningful climate change plan with continued carbon pricing, including rebates to households that fall under the federal backstop plan.

"I will be telling voters in [the] Banff-Airdrie [riding] that if they want different results, they can make different choices," Wilson wrote.

"In every election as Canadians we get to make an important choice for the future of our country, we get to decide what kind of future we want to build together," Justin Trudeau said on the steps of parliament in Ottawa that morning.

Incumbent Blake Richards, who was first elected to the House of Commons in 2008 and has served the riding ever since as a Conservative MP, started hitting the campaign trails early, posting on Twitter on Sept. 10 that he was starting to install lawn signs.

Austin Mullins, running for the Green Party also sent out a social media message saying he will be working "non-stop over the next 40 days to earn your vote."

Meanwhile the People's Party of Canada candidate Nadine Wellwood started her campaign early, handing out lawn sign in the rain in Crossfield, stating "neither rain, nor snow or dead of night shall keep Nadine from giving Banff-Airdrie voters a stronger conservative voice in Ottawa."