Male grizzly bears are emerging from dens despite massive snow dumps in the Canadian Rockies this spring.
Apr 7, 2011 12:00 AM By: Rocky Mountain Outlook 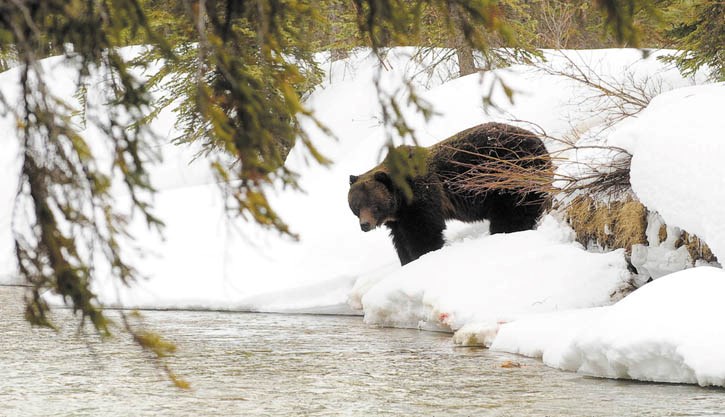 A large male grizzly is seen taking a drink from the Bow River near Castle Junction, April 1.

Male grizzly bears are emerging from dens despite massive snow dumps in the Canadian Rockies this spring.

A large male grizzly was spotted clambering around the snow-filled meadows at Hillsdale on March 30 in what is believed to be the first verified sighting of the year in Banff National Park.

Two days later, another large male bear was seen feasting on a dead deer by park resource conservation officers near the Bow River at Castle Junction.

It could be the same bear, but no one knows for sure.

And, bears are being spotted near Lake Louise and tracks have also been spotted in Yoho National Park, as far back as a few weeks ago in mid-March.

Parks Canada officials say it is not uncommon for male grizzlies to be out of their dens quite early in the spring, but this year is a little later, likely because of big snow dumps.

“The males are the first to emerge from the den sites and the females with small young cubs are still inside the den,” said Ron Le Blanc, Parks Canada’s resource conservation specialist.

“I would think, though, that they might be coming out even a bit later this year due to the deep snow conditions.”

Le Blanc said the large grizzly spotted by resource conservation officers on April 1 had been feeding on a deer carcass and later drinking water from the Bow River.

He said the deer had been hit and killed by a train on the Canadian Pacific tracks earlier in the week, but the dead deer was skidded away from the railway line so as not to attract bears there.

“He actually dragged the carcass across the river from the north side to the south side, across the open water,” said Le Blanc. “They’re hungry at this time of year.”

Wildlife photographer Paul Kalra captured a large male grizzly, which he calls The Boss on camera two days earlier, trying to move around in deep snow near Hillsdale Meadows.

He said he photographed the bear last year, too.

“Even with all this snow, his time clock was telling him to get up and go,” said Kalra.

For the past dozen years, researchers with the Trans-Canada Highway wildlife crossing project and Parks Canada officials have noticed local bears emerging earlier and denning later than ever before.

Last year, a grizzly was spotted between March 17 and 23 walking along the train tracks near Johnston Canyon, while in 2009, two adult grizzly bears were seen March 24 near Backswamp.

In 2008, a remote camera captured a grizzly bear crossing one of the highway overpasses on March 16, and in 2007, a grizzly was filmed on the second overpass on March 25.

In the United States, researchers are trying to find out if climate change is playing a role in grizzly bears heading into dens later each year and emerging from their winter slumber earlier than ever before.

Following more than 20 years of data on grizzlies in the Greater Yellowstone area, researchers there have noticed a troubling trend that could suggest grizzlies are changing their winter hibernation patterns.

Some male bears have been staying out of their dens into the end of December in recent times if food is available and weather permits, while others have ended their winter sleep as early as January.

Parks Canada officials say the emergence of grizzlies is a great reminder that bear season is beginning, that it’s time to brush up on bear safety and ensure all bear attractants are stored indoors.

They say residents should keep their properties free of garbage and attractants, and hotels and restaurants are urged to make sure their grease and garbage facilities are clean and bear-proof.

Any grizzly bear sightings should be reported to the Banff warden office at 403-762-1470.

Meanwhile, the province of Alberta has kept the moratorium on hunting grizzly bears on provincial lands in place for the fifth year in a row.