"There is no formal process for evaluating requests to rescind a Provincial Historic Resource designation ... Designations have historically only been rescinded when a resource has been profoundly compromised."
0
Mar 11, 2020 3:05 PM By: Jenna Dulewich 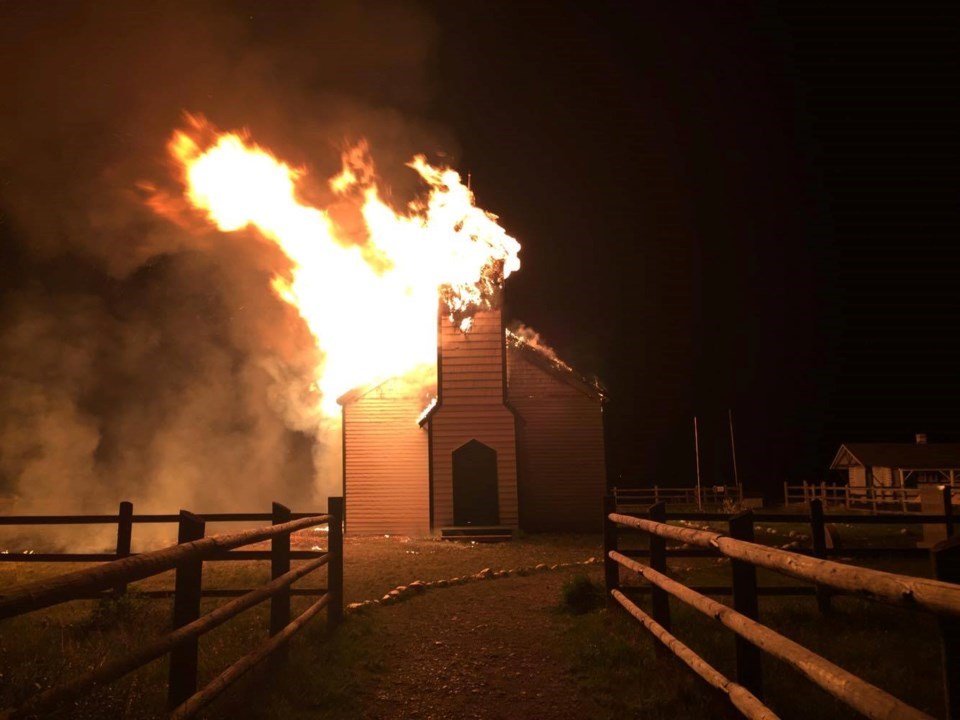 The McDougall Church fire in May 2017. RMO FILE PHOTO

BIGHORN – While an appeal to stop the restoration of the controversial 142-year-old historic McDougall Church was struck down earlier this week, the province is still deciding if the site will keep its historical status.

Alberta officials confirmed the province has received the Stoney Nakoda Nation letter requesting the provincial historic designation be rescinded after the May 2017 fire destroyed the McDougall Church arguing the historic aspect of the designation is no longer valid, with the application currently under review.

“There is no formal process for evaluating requests to rescind a Provincial Historic Resource designation," wrote Danielle Murray, press secretary to the Office of the Minister of Cultural, Multiculturalism and Status of Women, in an emailed statement.

"In part, this is because these designations are intended to preserve highly significant historic places. Designations have historically only be rescinded when a resource has been profoundly compromised.”

Murray said the province has yet to make a decision.

Last June, the province green-lit the restoration project proposed by the McDougall Stoney Mission Society after its volunteers salvaged 80 per cent of the original timber following the 2017 fire at the church, which was later determined to be arson.

Last fall, the MD of Bighorn granted a development permit for the restoration project, however it was appealed by the Stoney Nakoda Nation on Dec. 17 with an appeal hearing held last month.

At the same time, the Nation sent a letter to the Alberta government requesting the provincial historic designation be rescinded because the church “represents the early, difficult heritage of Alberta and the Stoney Nakoda people.”

The historic designation plays a factor in the future of the site as a 2004 Option to Purchase Agreement between the Nation and McDougall Society outlines Stoney Nakoda Nation exclusive and irrevocable rights to purchase the land.

Stipulations include if "the lands no longer are the site of the McDougall Memorial United Church or any replica or replacement thereof, the construction of which has commenced and the lands no longer carry the designation of 'Provincial Historic Site' and the order stating same is discharged from the title to the lands.”

If that option was explored and granted, the Stoney Nakoda Nation could purchase the land for $1.

"We are pleased that we have a decision and that we can move forward with the restoration … what the society would like to do would be to move forward for a positive future together – I understand there is a painful legacy of the past and some people have difficulties accepting the restoration, but many elders have shared with me that this is a healing place,” McQueen said in a phone interview.

During the Feb. 18 appeal hearing, several Stoney Nakoda Nation members filled the MD of Bighorn council chambers in Exshaw, voicing mixed opinions on the potential rebuilding of the church structure.

Some elders spoke in support of restoring the church saying it was an opportunity for Indigenous people to have their side of history told in the provincial landmark, while other elders said they did not agree with the restoration project noting they were still waiting on an apology from the McDougall Society.

“I know there is a lot of history with the McDougalls, and even though the United Church has apologized, the McDougall Society needs to work on apologizing and hearing the other side,” elder Margaret Rider said at the appeal hearing.

In the Feb. 11 letter to the Office of the Minister of Culture, Multiculturalism and Status of Women, the Nation asked for the historic resource designation to be rescinded due to the painful symbolism of the original landmark, also noting the lack of apology from the McDougall Society.

"The church symbolized settler colonialism and the church's subjugation of the Stoney Nakoda people. The church lands, which were illegally taken from Stoney Nakoda Reserves 142, 143 and 144, served as the site of the former Morley Indian Residential School,” stated the letter to the province.

The letter went on to state the Nation also does not believe the McDougall Stoney Mission Society has acted in the spirit of reconciliation including that the Mission Society “opposing the 1986 apology issued by the United Church of Canada for its role in the residential school system.”

Nation representatives said the Statement of Significance was based largely on the architecture of the church and as the church no longer stands, neither should the historical status.

“The Stoney Nakoda people are not in favour of the construction of a replica or replacement of the church, which for many members will only serve to recast the shadow of a painful history,” the letter read.

“The Stoney Nakoda have a beneficial interest in the church site pursuant to an Option to Purchase and wish to exercise this option and reclaim the land.”

At the appeal hearing, McQueen shared email correspondence with Nation officials expressing her frustrations with the lack of response.

"I have repeatedly tried to contact the Stoney Nakoda council and have yet to receive a single response," McQueen said through tears on Feb. 18.

"I have asked the elders how to respond to the lack of response and they give me a little laugh ... any reasonable person would agree I have done everything I can to [connect]. Stoney Nakoda will not find a greater advocate on reconciliation and telling the truth itself.”

McQueen also shared a rebuttal package that included more than 30 different occasions where the society members built a strong relationship with the Nation.

In a five-page document released nearly three weeks after the appeal hearing on Monday (March 9), the Subdivision and Development Appeal Board outlined why the committee decided to refuse the appeal submitted by the Stoney Nakoda Nation.

“The Board acknowledges the appellant’s submissions for the appeal of development permit application 70/19, however, the majority of grounds of appeal relate to matters which are outside of the board's jurisdiction,” the decision read.

Some of the issues raised that were outside of the board’s jurisdiction included the 2004 Option Agreement and the provincial historic designation.

One of the issues raised by Nation representative lawyer Sara Louden included the discretionary use for the development permit, which was listed under Community Buildings and Facilities, but the Nation believed should have been under Religious Assembly due to the nature of the building.

Religious assemblies are not permitted as a discretionary use in the district.

While the board acknowledged the original building was developed as a church, the board believed there was sufficient evidence to show the “historic nature of the church building and archeological features found on the property appropriately lends itself the described use of Community Buildings and Facility.”

“The board is satisfied with Ms. McQueen’s submission that the primary purpose of the landowner is historical (i.e cultural) in nature, not religious,” the decision read.

The Morleyville Mission was established in 1873 with the church built along the lands east of the Stoney Nakoda reserve in 1875. The building was restored in 1952 after it was left derelict for 50 years. In 1979, the site was named a provincial historic site, as it was the first Protestant church built in southern Alberta.

In May 2017, a fire that destroyed the church was reported at 4 a.m. While it was initially considered accidental, RCMP later confirmed it was arson after an arson detection dog sniffed out traces of what was believed to be fire-starting stimulants.