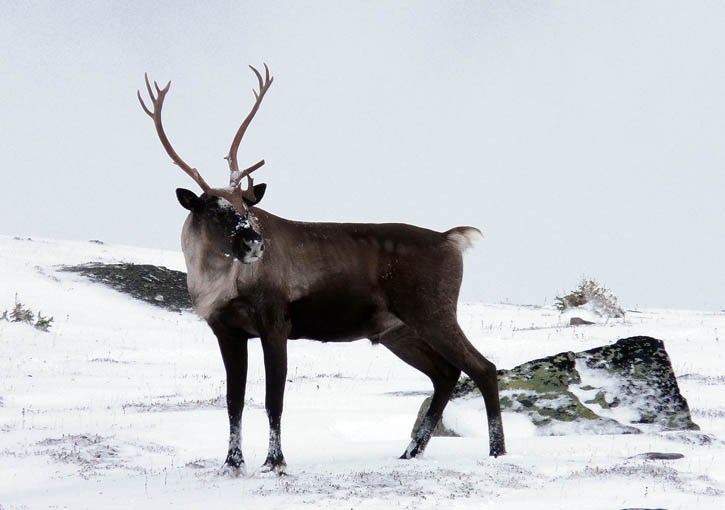 Caribou are more at risk than ever.

That was the conclusion of the Committee on the Status of Endangered Wildlife in Canada (COSEWIC) at its meeting in Halifax, April 27- May 2, where they listed the central population of mountain caribou, which includes the protected regions of Banff and Jasper, as endangered.

The southern caribou population in southeastern B.C. has gone from threatened to endangered, while the northern population from west-central B.C. to Yukon and the western Northwest Territories has been flagged as special concern, a step away from being threatened.

Officials say the situation is dire for the central mountain caribou population in Alberta and B.C., including national park lands, where numbers have declined by 60 per cent in the past 10 years to just over 500 mature individuals – and threats are increasing.

“With respect to turning the situation around, the herds in the worst shape will not turn around without intensive management,” said Justina Ray, a member of COSEWIC and executive director of the Wildlife Conservation Society of Canada.

“There is still opportunity with the larger herds and those in currently remote areas to learn from what has happened with southern and central mountain caribou and plan our future human footprint accordingly – and more carefully.”

Three populations of caribou, an animal featured on the Canadian quarter, were assessed at the COSEWIC meeting. Together, these include about 70 herds in the mountains of Western Canada, from southern B.C. and Alberta to Yukon and Northwest Territories.

Having lost 30 per cent of their range in the last century, many herds are dwindling at an accelerating pace because of dramatic habitat changes and disturbance from industrial development, such as logging, mining, oil and gas development and recreation.

In some areas, one of the biggest threats to caribou are wolves, which, as a result of destruction and alteration of habitat, have easier access to traditional caribou range by travelling on man-made roads, even ski trails.

An assessment of special concern is defined as a wildlife species that may become threatened or endangered because of a combination of biological characteristics and identified threats.

The endangered southern population is said to have about 1,300 adult individuals distributed in 15 herds, while the northern population has about 45,000 individuals among 45 herds, including several herds in steep decline where there is increasing industrial development.

The central mountain caribou population was previously considered to be part of the southern population. With an estimated 515 mature individuals, the central population has been deemed endangered.

It’s made up of 10 or 11 herds, most of which are on the east side of the Rockies in Alberta and into east-central B.C., including in Banff and Jasper national parks. All herds have less than 250 mature individuals and seven have less than 30.

Two herds have disappeared from this troubled group, including a remnant herd of five animals completely wiped out in an avalanche in Banff in 2009. The Burnt Pine herd in the northern part of the population’s range was also confirmed gone this year.

Three of four herds in Jasper have dropped to critically low numbers, with two of the herds – the Maligne and Brazeau – having less than 10 animals. In the mountain national parks, caribou numbers have declined from approximately 800 caribou 25 years ago to less than 250 animals.

“Threats are continuing and escalating,” she said. “There are just over 500 mature individuals in this unit and it is in the most dire situation of all three.”

Parks Canada was unavailable for comment at press time, however a captive breeding and augmentation program is a cornerstone of the federal agency’s caribou conservation strategy for the national parks.

At the same time, however, the federal agency is considering a proposal from Maligne Tours to build a commercial hotel on the shores of Maligne Lake. Maligne Valley is home to a caribou herd that has declined precipitously in the past 15 years from more than 60 to just five animals.

Former high-ranking Parks Canada employees, along with the conservation community, are fighting the development proposal, arguing this endangered herd requires less disturbance, not more, if there is to be any chance for its survival and recovery.

Meanwhile, at its recent meeting, COSEWIC assessed 26 other Canadian wildlife species as at risk.

They included the porbeagle, a large shark that makes extensive migrations from Canadian waters to the mid-Atlantic, as endangered; the gypsy cuckoo bumble bee, of which none have been seen in Canada since 2008, as endangered; and the copper redhorse, a fish that spawns in just one river in southern Quebec, as endangered

Of local interest, wolverines were assessed as special concern. COSEWIC indicated there is a poor understanding of how populations are faring under climate change and land use developments.

“The main problem is that we don’t have sufficient understanding of their sensitivity to land use and climate change to safeguard them appropriately as new threats are introduced,” said Ray.

“Ensuring that they are not placed into the same dire situation as mountain caribou will first require considerably more research and monitoring attention than they receive now.”

COSEWIC reports its results to the Canadian government and the public. It is the federal government’s decision on whether or not to legally protect a wildlife species under the Species At Risk Act (SARA).