He was a keen climber, a passionate powder skier and skilled professional mountain guide.
0
Mar 9, 2020 7:00 AM By: Lynn Martel 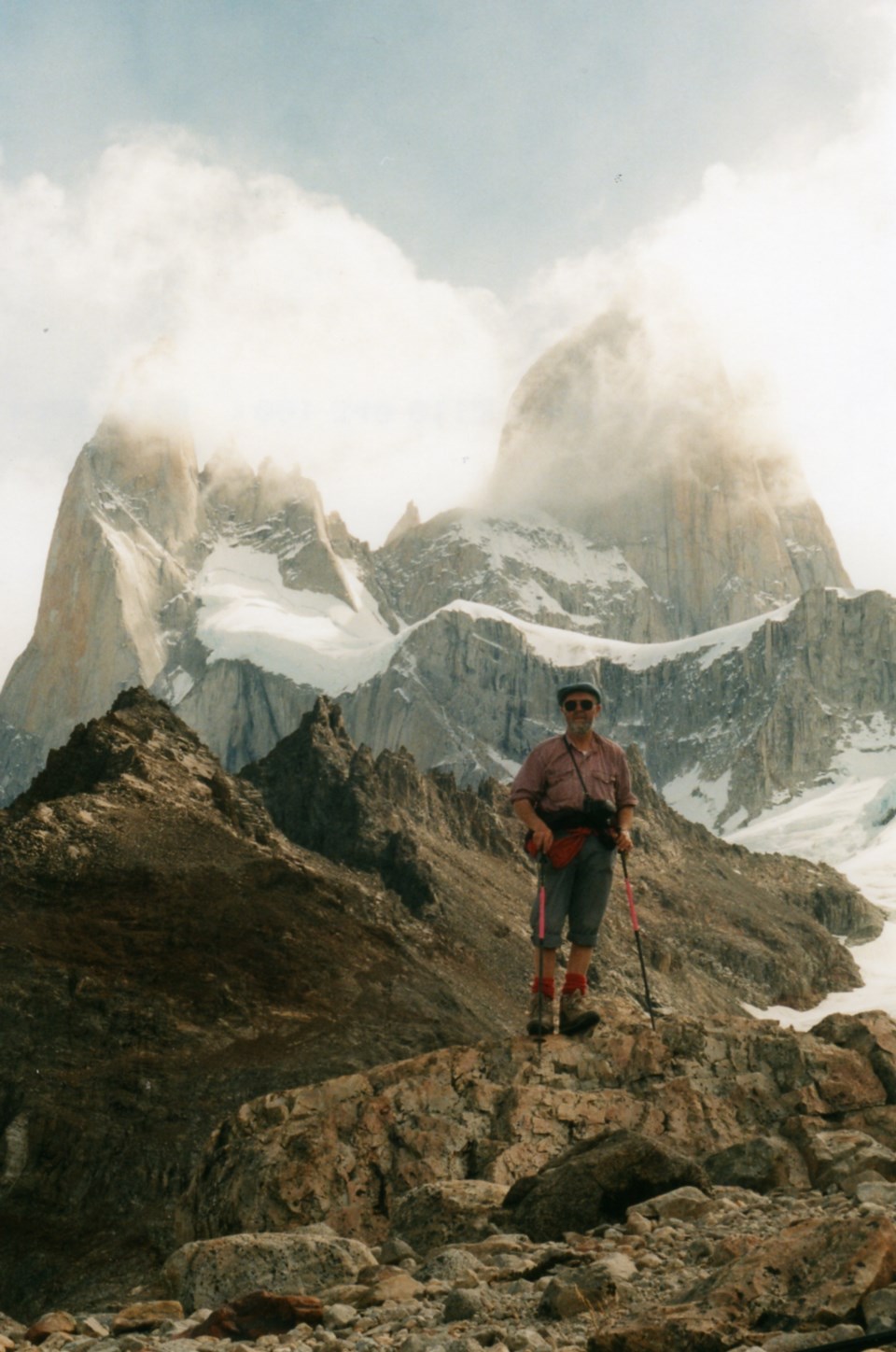 Eric Lomas was a respected ACMG mountain guide, here on vacation amidst the towering spires of Patagonia. SUBMITTED PHOTO

He was a keen climber, a passionate powder skier and skilled professional mountain guide.

And he was a loving husband, father and grandfather.

Lomas left his home in England in 1955 with plans to climb in Canada for two years. After travelling by boat from Liverpool to Montreal, he shared driving shifts all the way to Edmonton, despite having never driven a car before. A plumber by trade, he found work in Prince George and climbed in Jasper on weekends.

Introduced to the outdoors through Boy Scouts, he had climbed in the Alps, Norway and Scotland before arriving in Canada. While he tried skiing, he much preferred climbing until 1957, while living in Vancouver he discovered Washington’s Mount Baker and deep fluffy powder snow.

After leading climbs with the Alpine Club of Canada (ACC) and the BC Mountaineering Club, in the summer of 1960 Lomas took his mountain guide exam in Banff with Walter Perren, the revered Swiss guide who launched Parks Canada’s public safety program as Banff National Park’s first Alpine Specialist. The exam consisted of three days’ climbing, including Cory Crack, and glacier travel practise on Victoria Glacier. He passed.

That same year he earned his CSIA ski instructor certification. Then while working as an instructor at Baker, he noticed how the ski patrollers doing that work were first to leave tracks in the deep, fresh powder. Lomas approached the supervisor and his avalanche control career began the next morning.

It was also at Baker that he met a cute ski patroller named Dorle Hofmann; she was a good powder skier. They married in 1962 and their family soon grew to include Andre, Kim and Chris.

Relocating from Vancouver to Banff, Lomas operated Banff Climbing School with fellow guide Peter Fuhrmann. Then in 1965, he became hill manager at Whistler, and while there he took an avalanche course in Colorado, where he operated an avalauncher. Soon he moved the family to Stewart, BC where he managed avalanche control for Granduc Mines on nearly 50 kilometres of road through extreme avalanche terrain. There he operated a 75mm recoilless rifle – likely the first civilian to use artillery in Canada.

A few years later they moved to the Okanagan where he ran a plumbing business and a beach resort. Returning to Banff he was the Banff Centre’s mechanical supervisor from 1979 to 1988 and took over the Banff Climbing School until the mid ’80s. He guided and taught avalanche safety courses with fellow guide Bernie Schiesser. Together they built the ACC’s Peyto, Alberta, Neil Colgan, Freshfield and Scott Duncan huts. While skiing from the latter to the Trans Canada Highway, they were the first to take the now commonly used route named for them, the Schiesser/Lomas route. While constructing the Neil Colgan Hut in Banff’s Valley of the Ten Peaks they collaborated to establish the Schiesser Ledges access route. Lomas also partnered with Rudi Kranabitter to build Engadine Lodge.

“Our backyard was often a construction site being used to prefab Alpine Club huts,” Chris Lomas said. “I recall the Neil Colgan Hut being built on our lawn. It was installed by [my dad], Bernie Schiesser and volunteers. This happened no less than four times. I can remember many weekends helping him build Mount Engadine Lodge.”

When Parks Canada decided to decommission the Freshfield hut, Lomas and Schiesser flew it in pieces to Campbell Icefield to open their own backcountry ski touring operation, which the families continue to operate.

“In fact, the [Campbell Icefield Chalet] custodian hut is one of those built in our backyard,” Chris said. “When it was removed from the Freshfields, Eric and Bernie had it flown to the site it stands on now.”

Among his proudest achievements, said Andre, was Eric’s involvement with the Association of Canadian Mountain Guides, which he helped found. He served as secretary treasurer for four years and is an ACMG honorary member.

“Eric was one of the eight founding members of the Association of Canadian Mountain Guides in 1963,” said ACMG executive director Peter Tucker. “His vision was critical to setting in motion the creation of the professional association that would go on to becoming the first non-European member of the IFMGA. Eric was a fine ski instructor, an excellent avalanche safety educator, and above all a wonderful husband, father and gentleman.”

Lomas also contributed much time to the ACC in varying capacities.

“My father was heavily involved with the Alpine Club in the 1980s and ’90s,” Chris Lomas said. “He served as chair of the Banff Section. I can remember going on many Alpine Club trips that he guided.”

Lomas was made an ACC honorary member in 2005.

“Eric probably never got the credit he deserved for his contribution to the mountain community,” said Lawrence White, ACC executive director.

“In addition to his co-founding of the ACMG and his work in public avalanche safety, Eric also chaired the ACC Clubhouse capital development committee for years. He never sought the limelight and quietly went about his business. That was his unassuming nature, making contributions where contributions were needed. He will be missed.